Maggie Brown plays Kate-at-13 and Amber Hubert is Kate-at-23 in Lynn Shelton's film "We Go Way Back," which will play during the Seattle International Film Festival. (THE FILM COMPANY)
By Brangien Davis
Special to The Seattle Times

"I feel like I just sent my kid off to college," she says. "I feel like, well, I did my best, and there he goes ... " But Shelton isn't talking about her son, Milo, who at age 7 has a ways to go before trundling off to the dorms.

She's referring to her other baby: the film she wrote and directed called "We Go Way Back," which will play during the Seattle International Film Festival, May 25-June 18 (see accompanying story for details), and will run in select theaters this fall.

As any struggling filmmaker knows, getting an independent movie into distribution is a dream come true. "It's an amazing feeling," the 40-year-old Shelton says. "Before this happened, I felt like I was going to spend the next several years trying to generate a life for this movie."

But it turns out the movie has generated a life of its own — in large part because of its beautifully told and compelling story. "We Go Way Back" traces the story of Kate, a 23-year-old aspiring actress. Things seem to be going her way when she's cast in the lead role of "Hedda Gabler," but as the play preparations start to disintegrate (thanks to a series of hilariously misguided director epiphanies, including the decision that Hedda — and only Hedda — will speak all her dialogue in Norwegian), so too does Kate's confidence about where she's headed in life.

As Kate's self-doubt increases, she becomes haunted by her own 13-year-old self. The teen Kate first appears in the form of birthday letters she wrote for her older self to open at the turn of each new age. But soon the earnest, adolescent Kate seems to be there in bodily form, her beseeching eyes asking, "What was it again that you said you wanted to do?"

It's not entirely clear whether the younger Kate is real or imagined, but as Shelton explains, "The openness is intentional. That's the fun of art — you have to decide for yourself."

What is clear is that "We Go Way Back" is a funny, touching, thoroughly original and strikingly captured vision that stays with you long after the final credits have rolled.

Every frame of "We Go Way Back" was shot on location in the Seattle area, with scenes at the Ballard Sunday market, on the Ballard Bridge, outside the Empty Space Theater and inside The Bush School. Local actors constitute the entire cast as well. The 23-year-old Kate is played by Amber Hubert, a recent Cornish graduate, and the 13-year-old Kate is played by young up-and-comer Maggie Brown. The soundtrack (compiled by local musician Sean Nelson, of the band Harvey Danger) features music by local singer/songwriter Laura Veirs.

In short, the film is as much a product of Seattle as its creator.

A Seattle native, Shelton took her first acting class at age 11 at the Seattle Children's Theatre. After graduating from the University of Washington with a drama degree, she moved to New York. But not being an equity actress and not having an agent, she found herself doing a lot of unsatisfying work.

"Just as I was feeling less gratified by acting," she says, "I was becoming more interested in photography." So Shelton "transferred her addiction" from acting to photography, and in 1993 began pursuing an MFA in photography from the School of Visual Arts in Manhattan.

On a bit of a whim, she decided to take a video class. "I thought video would be freeing," she explains. "I thought I'd be able to play."

And play she did. Her first video project was what she deems deliberately bad video art — a movie called "White" that deconstructed the bridal gestalt. (Shelton was about to get married.)

"I had a great time," she says. "I could play with time and audio, and, of course, movement — as a control freak, I found it very gratifying," she says.

By graduation, Shelton had made two more films: one about women's relationships with their body hair ("Women have a lot to say about this topic!" she says), and the other a "very serious" exploration of levels of consciousness. After a few years, Shelton and her husband (former MTV VJ Kevin Seal) decided to return to Seattle, where for the last five years she's been a teacher in the film/video department at the Art Institute.

More films under her belt

She also created two documentaries, with financial backing from groups including 911 Media Arts and Humanities Washington. "The Clouds That Touch Us Out of Clear Skies" focused on women and miscarriage, and "The Fruits of Our Labors" centered on motherhood.

In 2004, an old Seattle connection prompted the creation of her first fictional film. Gregg Lachow, who runs The Film Company (a nonprofit initiative of the Northwest Film Forum), had seen her documentaries and asked if she'd be interested in doing a feature.

"I had been secretly thinking I wanted to make a feature," Shelton says. "But it was too daunting — I figured it would take 10 years." But when Lachow said The Film Company would produce it, her timeline sped up dramatically.

The first hurdle was coming up with a story. As she approached age 40, Shelton had become interested in the many different selves a person embodies in her lifetime.

"For a time I romanticized my 13th year," she says. "Looking back, I thought it was my peak creative year. I know I'm idealizing, but I felt I was creatively explosive at that age, plus I had self-confidence."

Her 13-year-old self stood in stark contrast to the self of her early 20s.

"That was when I really lost my confidence," she notes. "I was also thinking about my relationship with men at that age — in particular a date rape that I was complicit in. I was interested in deconstructing that experience."

Shelton suddenly realized how interesting it could be to put those two people together, onscreen. And thus, the idea for "We Go Way Back" was born.

Shelton wrote the script in a miraculously quick five weeks ("mostly while taking long walks," she says). The shoot took 16 days, during which she and her local crew shot a mere nine-and-a-half hours of footage. The total budget for the movie was under $200,000.

Shelton remembers thinking, "If there're only 11 minutes of good footage here, that's how long my movie will be." She ended up with 80 minutes of quality footage, and the film she imagined would take 10 years to complete was done in less than two.

"I do well with deadlines," Shelton says, laughing. By late 2005, she was ready to enter the film festival circuit.

In January, "We Go Way Back" vied against 11 other features at the Slamdance Film Festival in Park City, Utah (held at the same time as Sundance but significantly more indie). It won both the Grand Jury Award for Best Narrative Feature and the Kodak Vision Award for Best Cinematography.

"It was a complete shock," Shelton says, recalling the Grand Jury win. "I thought my cinematographer [Ben Kasulke] really deserved to win the Best Cinematography award. So after he won, I gave up hope for the Grand Jury prize — I thought they'd want to spread the wealth among the films.

"I just want to re-live that surreal moment of being hugged from all sides. It was pretty awesome."

Cyan Pictures, an independent film distribution company based in New York, was also at Slamdance, and decided to distribute the film beginning in September 2006, with a simultaneous release on DVD.

"Any time you emerge from the independent-film scene with distribution, you know the stars have aligned," says producer Lachow. "It's a combination of the film being really good, and us being really lucky."

"I feel really humbled by it," Shelton says of getting distribution. "Because I know so many people working so hard to do this."

Shelton reports that now she feels like she can finally move on to other projects. "Before the award and the distribution, I knew I just wanted to keep being able to make films," she says. "And that desire has stayed the same."

Brangien Davis is a regular contributor to The Seattle Times: brangiendavis@yahoo.com 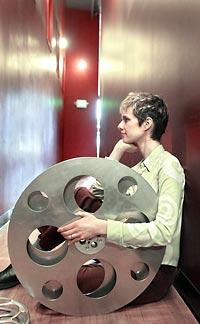 Getting her film into distribution is "an amazing feeling," says writer-director Lynn Shelton. (ALAN BERNER / THE SEATTLE TIMES)

"We Go Way Back" will screen twice during the Seattle International Film Festival as part of the New American Cinema Competition (and will run in select theaters this fall). SIFF venues and showtimes will be announced in the SIFF film guide, available in Thursday's Seattle Times.