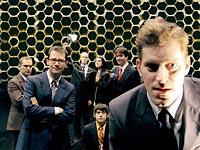 Awesome combines music, comedy, theatrics at On the Boards. (DAVID NIXON)
By Brangien Davis
Special to The Seattle Times

There is no tidy descriptor for "noSIGNAL," the new evening-length piece by local band "Awesome," so let's just lay it all out there: It's a musical sort-of-live concept album with theatrical elements and comedy bits addressing, among other topics, technical difficulties, recurring dreams, cell death, regeneration and bees. Lots and lots of bees.

On the stage, a honeycomb of seven hexagons marked with yellow tape serves as the sole set — unless you count the impressive array of instruments scattered about. But though the setting is minimalist, there's plenty to watch, including a bee's-eye-view video by David Russo and, of course, the seven members of "Awesome" positioned and at the ready.

Their movements may be restricted (think: small, beelike gestures), but the music is big, sometimes bizarre and often beautiful. Employing a theremin, accordion, trumpet, banjo and mandolin, in addition to countless other instruments, "Awesome" crafts a uniquely compelling sound.

While band members describe their music as a mix of the Beatles, They Might Be Giants and Ween, there's also a touch of Beach Boys in this show, thanks to impressive falsettos sung in tight, multipart harmony with happy-go-lucky appeal. Indeed, the seven seem to hum as a single organism.

But something is threatening the hive! One by one (and always hilariously), the drones are expelled to the outside world, where they are cold and vulnerable — lost without their bee buddies.

All this might seem a little twee, if it weren't for the immense musical talent of the band, which encompasses a mastery of both complicated time signatures and irresistible pop hooks. Not to mention the delight the musicians clearly take in writing lyrics — it's not every band that can create catchy songs about storage skills, optic nerves and Genghis Khan.

In addition, it must be said, these guys are totally nerd-hot.

The second half of the show is a payoff sweet as honey, not only because it features a gleeful reunion of the bee friends but because it contains a swarm of musical numbers, several of which subtly build to thoroughly satisfying anthems.

There's a big, bold word for this kind of fun — and I bet you know just what it is.