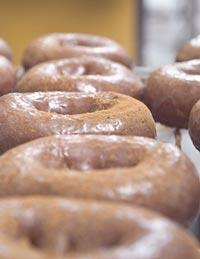 Maureen Wyse was in her third year of veganism when she discovered Mighty-O Donuts in Seattle.

"They are truly the best thing I've ever eaten," says the New York University student, who hauls five dozen back for friends in New York every time she visits her native Seattle. "It's the thing I look forward to most when I come home — no offense to my family or anything."

The vegan doughnut niche is just one unusual role filled by Mighty-O in the world of doughnuts.

Besides being dairy-free, Mighty-O's also are organic and have no trans fats.

Owner Ryan Kellner likes to focus on the freedom from trans fat because he worries that the vegan part might scare away potential customers.

"Some people have a prejudice about the word 'vegan,' " he said. "A lot of people don't even know how to pronounce it."

Bonnie Liebman, director of nutrition at the Center for Science in the Public Interest, doesn't have that problem. After hearing about Mighty-O's ingredients, she had no doubt that they're real doughnuts.

Kellner agrees that Mighty-O's are "doughnuts through and through."

Still, he said, because they have no trans fats and are organic, "they're healthier not just for you, but for the environment, too."

Kellner, who eats vegan most of the time, started Mighty-O Donuts in 1999 with a business partner who has since left. They wanted to start a company and decided to make doughnuts, after which friends suggested vegan, organic doughnuts.

"Organics were crossing from the fringe-food market into the mainstream, and it fit nicely with our own personal views about food, the environment and business," Kellner said.

After a few months of experimenting with old-fashioned doughnut recipes they found on the Internet, the partnership was ready. Mighty-O sold its first doughnut from a cart at a University District street fair in 2000.

The next year, it graduated from carts to a shared wholesale bakery. In 2002, it moved into the former Honey Bear Bakery space in Green Lake. That's where the cafe opened in 2003, offering coffee along with $1 doughnuts in flavors such as Naked Cake (plain vanilla), Grasshopper (mint glaze on chocolate) and French Toast (maple glaze on spice).

Mighty-O has about a dozen employees, and they're still working on a successful vegan, trans-fat-free yeast or "raised" doughnut.

Kellner is particularly proud that Mighty-O's have no trans fat, which means they are not made with partially hydrogenated oil, considered one of the worst fats to eat.

Dunkin' Donuts' doughnut specialist told The New York Times last year he could not cut out the partially hydrogenated oil without compromising taste, something Kellner thinks is a bunch of hooey.

"If we can to do it with a doughnut, why can't everyone else do it?" he asked, referring not just to other doughnut makers but to companies that make anything with partially hydrogenated oil.

Kellner guesses other companies keep partially hydrogenated oils because they are cheaper than other oils. The cost for the palm fruit oil that Mighty-O uses can cost two or three times as much as alternatives, he said.

Kellner wouldn't say how many doughnuts Mighty-O sells each day, but the bakery delivers regularly to dozens of coffeehouses and groceries.

The Whole Foods in North Seattle began carrying Mighty-O's in 2002. They are now in the chain's Bellevue and Portland stores, and the bakery coordinator for this region hopes Kellner will supply other Seattle-area stores as they open.

Like Mighty-O, the Whole Foods bakery frequently is asked whether its food is healthy.

"I say it's not going to make you skinny, but it's the highest quality you're going to get," Beron said.

Since launching online sales earlier this year at www.mightyo.com, the company has shipped to fans from California to Maine.

That might save Wyse a visit home — unless she just wants to see her family.

Ryan Kellner owns Mighty-O's Donuts, which sells vegan doughnuts cooked in oil with no trans fats. They are available at his store in Seattle's Green Lake neighborhood and at dozens of coffeehouses and groceries, including Whole Foods. (MARK HARRISON / THE SEATTLE TIMES)

Beginnings: First doughnuts sold at a University District street fair in May 2000