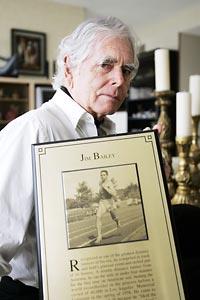 Jim Bailey, in his Bellingham home, holds a plaque given to him by the University of Oregon commemorating his sub-4-minute mile in 1956 at the Los Angeles Coliseum. (ROD MAR / THE SEATTLE TIMES)
By Blaine Newnham
Special to The Seattle Times

He remains the answer to one of the real good sports trivia questions.

Who ran the first sub-4-minute mile in the United States?

"Nobody but a few track historians knows or really cares," said Jim Bailey last week from his home in Bellingham.

This week — Saturday to be exact — will mark the 50th anniversary of Bailey's epic run, one that was so surprising and at the same time so unwelcome that it made him an enemy in his native country of Australia.

And, really, has kept him from going home.

"Your country has been kinder to me than mine," he said.

Bailey, then a 26-year-old Aussie, was the fifth man to break history's greatest sports barrier, and the first to do it on U.S. cinders.

And it wouldn't be until a year later, 1957, that a lanky University of California runner, Don Bowden, would become the first American to break the barrier, in the solitude of Stockton, Calif., another good track trivia question.

It surprised me that Bailey, 76, found it painful to discuss his feat, the come-from-behind, inexplicable conquest of countryman John Landy, the world-record holder in the mile.

"I knew I was in the race to make it competitive, but with the understanding it was John Landy's to win," said Bailey. "I never thought about breaking 4 minutes."

The year was 1956, two years after Brit Roger Bannister first broke the barrier. The Olympics were scheduled in Melbourne, and a race to promote the Games was run at the Los Angeles Coliseum as part of the USC-UCLA dual meet.

Ah, those were the days: 40,000 people in the Coliseum to watch a dual track meet.

"And 40 million to watch the race later on television," Bailey said. The coverage immediately followed the finish of the Kentucky Derby. The world was ready to see Landy run under 4 minutes in the United States.

Bailey was the Australian half-mile champion who, after scratching because of an injury from the famed Commonwealth Games showdown between Bannister and Landy in Vancouver, B.C., in 1954, was drawn to Oregon to run for Bill Bowerman.

In 1955, Bailey won the NCAA mile, just ahead of his Oregon teammate, Bill Dellinger. The two helped put Eugene and distance running on the map, starting the long line that Jim Grelle, Dyrol Burleson, Steve Prefontaine and Alberto Salazar would take up.

Bailey wonders if he had run in Vancouver if he might have been able to protect Landy from the fast-closing Bannister. In Los Angeles, Bailey was able to hang with Landy through three laps, following his directive to make the race competitive.

Nonetheless, Bailey moved near Landy on the final lap.

"All of a sudden, I had the feeling that I could blow by him," said Bailey. "At the same time I knew my place."

As Bailey pulled alongside, he reached back and patted Landy on the butt and said, "Let's go, John."

Landy, caught by surprise, made a move but couldn't catch Bailey.

"Once I was level with him, I forgot about all the obligation," said Bailey. " ... You know, let the better man win."

Bailey won in 3 minutes, 58.6 seconds. He gained international fame when all he wanted was to get an invitation to the Australian Olympic trials later that year.

Bailey admits now that he didn't handle the victory well.

Upon returning to Australia, he announced he was in better shape than he had been when he beat Landy, and he'd beat him by an even wider margin the next time they met.

"They would have excused me if I had been more apologetic about beating Landy and not said the things I did," he said. "Landy was so popular, the way swimmer Ian Thorpe is now. I got death threats for what I'd done, and I was booed at the trials."

"I wasn't right, mentally or physically," he said.

To this day, Bailey says failing in the Olympics, in front of his countrymen, left more of an impression on his life than beating Landy and running the first sub-4 in America.

"I was completely overwhelmed by what happened in Melbourne and never recovered from it," he said.

Bailey worked as a manufacture's rep in the sportswear business, and lived for a while in Kirkland before settling in Bellingham, where he sold real estate at nearby Semiahmoo Resort. He described times of his life as that of a "misfit living on the edge."

Perhaps it wasn't defeat that affected his life as much as victory. The day he beat John Landy, when he wasn't supposed to.