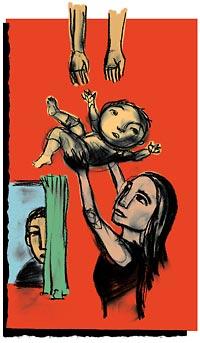 Nihara Choudhri and her husband both knew who they wanted to nominate as a guardian for their son in their will.

It wasn't until they got to the estate planner's office that they realized it wasn't the same person. She wanted her sister; he preferred his brother.

"We were bickering in front of the estate planner," admitted Choudhri, a former family-law attorney who advises other parents to be more prepared in her book, "Parent Savvy: Straight Answers to Your Family's Financial, Legal & Practical Questions " (Nolo, 2005).

It's unpleasant to think about death, and even more so to choose a replacement to raise one's children. With all the emotional minefields, picking a guardian can rile up tensions between couples and their extended family.

However horrible it is to ponder, experts suggest parents consider the alternative: letting a judge decide who raises their child without their input. Or worse, forcing grieving children into a family-custody battle.

"The judge may end up making a decision that is completely contradictory to what the parents would have wanted," said Seattle attorney Stacey Romberg. "But the judge has no way of knowing that.

A national survey of 1,000 adults last year found less than half had a will, according to the legal Web site FindLaw.com.

"It's better to nominate an OK guardian than name no one," Choudhri said. "If, God forbid, something happens to you, you want to make sure your child is protected. That is your major job as a parent."

But handing over that job — even as a remote possibility — isn't easy.

"We hate the thought of our kids growing up without us," said George Sayre, a Seattle University visiting professor of psychology. "The idea of them celebrating birthdays or a wedding without us terrifies us."

Because of that, parents first lean toward a surrogate most like them. "That's why it often becomes my family versus yours, because they're the next best thing to me," said Sayre, a marriage and family therapist. "But part of that is for us, not just for the kids."

For the same reason, many parents immediately jump to their own parents. But unless grandparents are quite young, experts suggest parents consider the logistics. "While you trust grandparents and know they'll love your kids more than anyone, you really have to think about the practical aspects of raising children and teenagers," Choudhri said.

The most popular choice is siblings, then cousins, parents and family friends, experts say.

Parents need to emotionally separate themselves a bit and try to imagine what it might be like for their grieving children to fit into a new family, Sayre said. "It shouldn't just be, 'Who do we like best?' " he said.

That's what led Ballard residents Ruby and Sebastian Grynberg to choose his brother as guardian for their two sons, 4 and 2, even though all Sebastian's family lives in Argentina. With same-age cousins, household help and a strong cultural emphasis on family, the boys would be immediately embraced, even if the initial transition was hard, they decided.

"We talked about it a lot," Ruby said.

Their choice did shock her family, some of whom live nearby. "Once we explained our reasons, they understood," she said. Her brother is their backup choice.

"For us, the biggest reason to [make a will] was the potential conflict between the two sides of the families, especially since they don't even speak the same language," Ruby said. "It was important to have that conversation with people so they know what's going to happen and there are no hard feelings or misunderstandings."

Naming a guardian can pit family against family, with potential hurt feelings by the not-chosen, or by the chosen who decline and risk offense.

Many couples argue over the merits and drawbacks of various family members. But pre-existing tensions can taint the emotional debate, Sayre said.

For example, if parents haven't really addressed differing religious beliefs, that's likely to crop up in their guardian preferences, even if it's unspoken, he noted.

The choice is tricky when families don't get along, especially if one side worries about access to the children. Sayre advises being upfront and clear about the decision.

That said, Choudhri doesn't see a need to explain to every person why he or she was passed over. She and her husband eventually chose her sister as guardian to their 2-year-old and his soon-to-be-born sibling. Since her husband's brother works long hours, he wouldn't be as involved with daily parenting. But their siblings will serve as co-trustees, managing finances.

Gig Harbor single mom Nancy Solomon knew that if she died her two adopted children, ages 8 and 4, would be orphaned for a second time. So for her, "it was the hardest decision I've ever made, other than adopting," she said.

She chose her sister — who already assumed it was a given — with a close friend as a backup. Her top priority was love, followed by shared values.

"I wanted them to grow up in a family with a lot of love, respect and trust," she said. "I figure any other thing people can get from other resources, but love you can't replace."

Who has the best relationship with my child?

Who has the time and energy to care for my child — and will still have it when he/she is a teenager?

Whose parenting style do I most respect?

Whose values are most in sync with my own on important issues such as religion, education and money?

Whose family would my child fit into best?

Would my child have to move far away?