When Mayor Greg Nickels signed a new law this month allowing Seattle skyscrapers to soar hundreds of feet taller, he said everyone would benefit from the plan to curb sprawl and bring people closer to jobs and cultural attractions.

But perhaps no one stands to benefit as much as Al Clise, the low-profile, fourth-generation leader of Clise Properties.

For more than a century, the Clise family has been buying land, patiently assembling a portfolio that stretches across seven full blocks and six partial blocks. Using the city's new zoning rules, Clise wants to push downtown north into the Denny Triangle with as many as 15 gleaming new condo and office buildings, some rising more than 40 stories.

Clise Properties holds far more property likely to be redeveloped under the new zoning rules than any other owner, a Seattle Times analysis shows.

In an interview, Clise, 56, acknowledged the company's position: "I really don't think an assemblage of property exists like this in a core of a major urban center in America."

Over time, Clise's plan could dramatically remake the area with 10 million square feet of new office and residential space, Clise says — an amount equal to the development planned in Microsoft co-founder Paul Allen's makeover of the South Lake Union neighborhood just to the north.

"The interesting thing is it doesn't require any investment from the city," Clise says, unlike the redevelopment of South Lake Union, where Allen is seeking millions in public improvements to streets, parks and utilities.

The fact that Clise Properties controls such a large swath makes it possible to attract corporations seeking large downtown tracts. "It provides for better architecture, better design, and all those things that make a better city," Clise says.

It's been a long, sometimes frustrating effort for the Clise family to transform the Denny Triangle, an uneven mix of parking lots, low-rise buildings and the Greyhound bus terminal. The neighborhood is bounded by Denny Way, Interstate 5 and roughly Sixth Avenue to the south.

The family's quest began shortly after Al Clise's great-grandfather, J.W. Clise, arrived in Seattle in 1889, the year much of downtown was destroyed by fire. The family started investing in real estate, betting that one day downtown would spread north and east.

For decades it was slow going, as prominent landlords fought to keep new development south of Pine Street, according to local historian Walt Crowley.

It looked like the Clises would finally hit pay dirt in the 1980s as available downtown lots were built out with skyscrapers and the city identified the Denny Triangle as a logical expansion area. But in 1989, an anti-growth citizen uprising, the CAP Initiative, passed by a landslide. It set lower limits on building heights and the overall size of downtown buildings.

"The thinking at that point was if you downzone everything, growth won't occur. And as everybody knows 20 years later, that was incorrect. The growth still comes. It just goes everywhere else and creates problems like congestion and sprawl," Clise says.

So the Clise family sat on its property, waiting with all the patience of a diehard Mariners fan. "We're conservative. Most developers will want to build something quickly. That's not what we do. We're a little different ... we're in this for the long haul," Clise says.

Today, after a centurylong tug of war over the direction of downtown expansion, the new zoning may extend downtown to the north.

"With Clise's enormous footprint, they are sitting in a very desirable position," says Tom Pehl, director of brokerage services for Trammell Crow, a commercial real-estate services company. "They have the ability to significantly influence a part of the downtown core that is underdeveloped."

Last year, as Nickels laid plans for the new zoning, the mayor held a news conference in the new federal courthouse at Stewart Street and Seventh Avenue, overlooking a sea of parking lots. The mayor proposed zoning changes that would demolish the CAP Initiative limits and encourage new residential towers. Nickels argued that one condo tower built on a parking lot would provide as much housing as a 32-acre suburban subdivision.

To advance the zoning proposal, Clise Properties began working the City Council. The company hired consultant Joe Quintana to lobby the council. Clise Properties and its employees contributed at least $7,000 to the election campaigns of Nickels and City Council candidates in 2005.

Clise says he also brought Nickels and council members to the company's conference room, threw open the double doors and showed them an architect's model of a redeveloped Denny Triangle, bristling with new buildings.

Still, Clise was flying under the public radar, not showing the model to the media. "We've never been real aggressive about getting publicity. We're a little more low-key," Clise says.

Meanwhile, Councilman Peter Steinbrueck, chairman of the city's Urban Development and Planning Committee, started a methodical, 11-month review of the mayor's zoning proposal. He hired top planners from Vancouver, B.C., and brought in real-estate experts to estimate what developers could pay for public benefits, such as affordable housing, and still profit enough to build new skyscrapers.

Steinbrueck also complained that Quintana and Clise official Lyn Krizanich both sat on the city's Planning Commission, which advises the mayor and council on land-use issues.

"My frustration is that good planning often takes a back seat to profits and politics," Steinbrueck says. "This time around, I think it was somewhat different. Developers got pretty much what they wanted, but they contributed to substantial public benefits."

Clise Properties owns about two dozen parcels in the Denny Triangle that are likely to be redeveloped under the new zoning rules, according to the Times analysis.

That property was valued at $85 million by King County. It's likely worth millions more now that much taller, bigger buildings can be built on the land.

Clise says the city will get a good deal in return for easing the height limits.

The city got "its pound of flesh" from developers with the new fees, he says, and those will make construction more difficult, more expensive and more time-consuming.

The wave of new construction would add thousands of jobs and condos to the Denny Triangle — a smart use of urban land, Clise says. "It's an efficient, sustainable way to live and be a healthy city. That's accepted logic all over the world today."

Clise says there's no timetable for his grand plan.

"When the right deal and market present themselves, it will go forward."

He also says his company will need partners.

"It's an enormous undertaking and we're a relatively small company, so we need to do this with others."

The first project will likely be a 32-story mix of office space and 170 luxury condos called Seventh at Westlake.

Clise stresses that his company has been patient for generations and won't rush into a building spree just because the downtown residential market is hot now.

"This is a big weight. We want to do it right. The biggest tragedy you could have is to do it poorly because you'll never get another opportunity like this again." 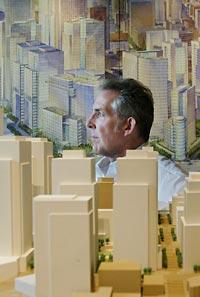 Clise Properties has been "low-key" about publicity, said Al Clise, the company's fourth-generation leader. But Seattle's new zoning rules will give the family &#8212; and its buildings &#8212; a higher profile. (ALAN BERNER / THE SEATTLE TIMES)