President Bush tugs the sleeve of Chinese President Hu Jintao as Hu starts to walk down the wrong stairs during an arrival ceremony outside the White House Thursday. (MARY F. CALVERT / AP)
By Dana Milbank
The Washington Post

WASHINGTON — Chinese President Hu Jintao got almost everything he wanted out of Thursday's visit to the White House.

He got the 21-gun salute, the review of the troops and the colonial fife and drum corps. He got the exchange of toasts and a meal of wild-caught Alaskan halibut with mushroom essence, $50 chardonnay and live bluegrass music. And he got an Oval Office photo op with President Bush, who nodded and smiled as if he understood Chinese when Hu was speaking.

If only the White House hadn't given press credentials to a Falun Gong activist who five years ago heckled Hu's predecessor, Jiang Zemin, in Malta. Sure enough, 90 seconds into Hu's speech on the South Lawn, the woman started shrieking "President Hu, your days are numbered!" and "President Bush, stop him from killing!"

Bush and Hu looked up, stunned. It took so long to silence her — a full three minutes — that Bush aides began to wonder if the Secret Service's strategy was to let her scream herself hoarse. The rattled Chinese president haltingly attempted to continue his speech, and television coverage went to split screen.

But he wasn't OK, not really. The protocol-obsessed Chinese leader suffered a day full of indignities — some intentional, others just careless. The visit began with a slight when the official announcer said the band would play the "national anthem of the Republic of China" — the official name of Taiwan. It continued when Vice President Dick Cheney donned sunglasses for the ceremony, and again when Hu, attempting to leave the stage via the wrong staircase, was yanked back by his jacket. Hu looked down at his sleeve to see the president of the United States tugging at it as if redirecting an errant child.

Then there were the intentional slights. China wanted a formal state visit such as Jiang got in 1997, but the administration refused, calling it an "official" visit instead. Bush acquiesced to the 21-gun salute but insisted on a luncheon instead of a formal dinner, in the East Room instead of the State Dining Room. Even the visiting country's flags were missing from the lampposts near the White House.

(The choice of the lower-level protocol presumably reflected the administration's sensitivity to criticism from members of Congress and others over China's perceived economic opportunism and suspect human-rights record.)

But as protocol breaches go, it's hard to top the heckling of a foreign leader at the White House. Explaining the incident — the first disruption at the executive mansion in recent memory — White House and Secret Service officials said that she was "a legitimate journalist" and that there was nothing suspicious in her background. In other words: Who knew?

Hu did. The Chinese had warned the White House to be careful about who was admitted to the ceremony. To no avail: It granted a one-day pass to Wang Wenyi of the Falun Gong publication Epoch Times. A quick LexisNexis search shows that in 2001, she slipped through a security cordon in Malta protecting Jiang (she had been denied media credentials) and got into an argument with him. The 47-year-old pathologist is expected to be charged today with attempting to harass a foreign official.

Bush apologized to the angry Chinese leader in the Oval Office. "Frankly, we moved on," National Security Council official Dennis Wilder told reporters later. It was, he said, a "momentary blip."

Maybe, but Hu was in no mood to make concessions. In negotiations, he gave the U.S. side nothing tangible on delicate matters such as the nuclear problems in North Korea and Iran, the Chinese currency's value and the trade deficit.

Wilder pleaded for understanding. "Some people today want to see a quick fix to the trade imbalance," he explained. "But in the new global economy, there is no quick fix."

In the arrival ceremony, Bush, after leading Hu on a review of the troops, welcomed him to the White House. Hu clapped for himself. He was less enthusiastic about the long list of demands Bush made in his welcome speech: expand Chinese consumption of U.S. goods, enforce intellectual-property rights, and allow freedom to assemble, speak and worship.

Hu's reply was overshadowed by what the White House transcript politely called an "audience interruption," as if somebody had sneezed.

The meeting in the Oval Office brought more of the same. In front of the cameras, Bush thanked Hu for his "frankness" — diplomatic code for disagreement — and Hu stood expressionless. The two unexpectedly agreed to take questions from reporters, but Bush grew impatient as Hu gave a long answer about trade, made all the longer by the translation. Bush at one point tapped his foot on the ground. "It was a very comprehensive answer," he observed when Hu finished.

Last came the unofficial state luncheon. After the butter heirloom corn broth and the ginger-scented dumplings had been consumed, Hu rose with a toast that proclaimed he and Bush had "reached a broad and important agreement on China-U.S. relations."

The White House didn't see it that way. Instead of a statement about a new accord with China, it issued a press release titled "MEDICARE CHECK-UP: Prescription Drug Benefit Enrollment Hits 30 Million." 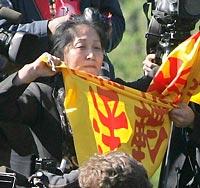