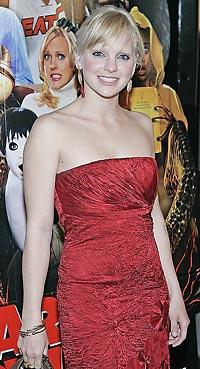 "I knew at a young age it was a difficult profession. My parents were so supportive and believed in me 100 percent," said Faris, 29, who moved to Edmonds when she was 6. Her father, Jack, is a sociologist, and her mother, Karen, is retired after teaching at Seaview Elementary. She has an older brother, Robert, 31, a doctoral student at the University of North Carolina, Chapel Hill.

"My dad'll tell the checkout woman at the supermarket that I'm a movie star. She looks at me like, 'Who the hell are you?', and I'm left to explain I'm in the 'Scary Movie' films, then she'll tell me she doesn't like scary movies. My dad puts me in these awkward spots because he thinks I'm so well-known," she said, laughing, in a phone interview.

Faris is arguably most known for the cheesy "Scary Movie" franchise, the fourth version of which just opened. But the young starlet has had small but memorable turns in prestige films, too, including "Lost in Translation" (she played the ditzy actress who inanely babbles with Scarlett Johansson's photographer-husband) and "Brokeback Mountain" (the chatterbox Texas socialite whose quiet husband connects with Jake Gyllenhaal's Jack Twist).

Her first acting role was in Arthur Miller's "Danger: Memory" at age 9, which ran for three months at the Seattle Repertory Theatre — something Faris called a "great experience for me."

She played Scout in the Issaquah Village Theatre productions of "To Kill a Mockingbird," the title character in "Heidi" and Rebecca in "Our Town."

Faris made a frozen-yogurt commercial when she attended Edmonds-Woodway High School. Her big line in the commercial was "Not anymore!" when asked if she was eating yogurt, while shoveling it into her mouth.

"It was absolutely humiliating," she remembers of being in school while the ad aired. "As I'd walk down the halls, people would say, 'Not anymore!' They did a close-up of my face; it couldn't have been closer. I was 14, but looked 9. My teeth were all messed up; I had braces because I had a big gap between my teeth. ... You'd think being in a commercial would be kind of a thrill for a kid, but I was really a big nerd."

Faris found solace in drama club, where teacher Bruce Mindt was a big influence. "He was one of the few teachers who was very encouraging and believed in me and my drive to become an actress," she said. "In my experience, some drama teachers tend to be a little bit bitter, but not him. He was very enthusiastic and passionate. I still talk to him."

In turn, Mindt, who still teaches there, has high praise for Faris.

"As a student she was inquisitive and determined," Mindt said. "She demonstrated maturity with how she took her time; she continually came to rehearsal prepared with a clear idea of what her character was trying to achieve and she definitely showed that she had the ability to risk."

After graduating from high school in 1994, Faris attended the University of Washington and earned her undergraduate degree in English literature. She moved to London and appeared in an independent film, 1999's "Lover's Lane," where she met her husband of nearly two years, actor Ben Indra, 27. She gave Hollywood a shot and was cast in her breakthrough movie, 2000's "Scary Movie." It became Dimension Films' highest-grossing movie, earning more than $300 million worldwide.

"That's pretty amazing. I'm flabbergasted at its success," she said. "People want to go to the movies to have a good time. You can count on 90 minutes of just really fun popcorn humor."

The newest sequel spoofs "The Grudge," "The Village," "Saw," "War of the Worlds," "Million Dollar Baby" and Tom Cruise's couch-jumping escapade on "Oprah."

"I like that about the franchise; we can spoof whatever. We can take what's popular at the moment and slide it into a very complicated plot structure," she said tongue-in-cheek. "There aren't many comedic roles out there for women. ... I never realized how much fun I'm having."

Of her memorable "Brokeback Mountain" role as LaShawn Malone, the Texan who just can't shut up, Faris has fond memories.

"That movie was very special to me," Faris says. "I felt out of my comfort zone. I was nervous because when I'm offered a role as opposed to auditioning — it's like you haven't had your vision for the role approved. I was nervous Ang Lee wouldn't [approve], but he did; he responded well."

She continued, "For me, ['Brokeback Mountain'] is not so much an issue movie as it is a love story that's very well told. It's tragic for the men — and very tragic for the women."

Faris will also appear in this summer's "My Super Ex-Girlfriend" with Uma Thurman and Luke Wilson, which is about a heroine, G-Girl (Thurman), who is jealous of ex-boyfriend Matt's (Wilson) new flame, Hannah (Faris).

"She comes after us with a vengeance. The fight scenes are pretty intense. Uma's obviously very skilled at fighting. ... She's very intimidating and has a statuesque figure; I'd like to think I held my own."

Faris has returned to Edmonds-Woodway to speak to Mindt's class. She's jealous of the new "beautiful theater" and dressing room her alma mater has now, as opposed to the cafeteria she performed in.

"It's nice to see that the district put an emphasis on the theater program; it's usually overlooked," said Faris.

Of Faris' appearance, Mindt said, "Anna was very kind and gracious and just wanted to spend a minute talking with the students about acting and the business.

"Beyond turning out to being a successful actor, she has turned out to be a very nice person."

Kurt Anthony Krug is a freelance writer and occasional contributor to The Seattle Times: kurt513@core.com