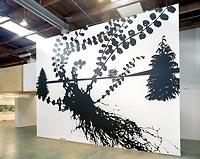 "Boys and Flowers," the title of the new exhibition at Western Bridge, hints at male artists using organic subject matter, or perhaps at artists tweaking stereotypes about masculine interests. (Or at pictures of boys and flowers.) And the show is about these things, but not completely.

According to Western Bridge director Eric Fredericksen, the title "Boys and Flowers," borrowed from a piece in the show, is simply a loose concept allowing the organization to "work with artists who'd been on our wish list for a while." The exhibition should be taken as a relaxed, but very strong mix of varied works, from large-scale installations, full of conceptual and visual layers, to small, gorgeous close-ups of flowers.

The idea for the show began with Kutlug Ataman's "The Four Seasons of Veronica Reed," a compelling video installation that surrounds you with audio and video footage of Reed, an Amaryllis bulb fanatic. Ataman's rich, claustrophobic images of Reed and her bulbs and blooms, along with Reed's endless, chirpy commentary, draw you into her obsessive world.

Ataman's installation co-anchors the show with two installations commissioned by Western Bridge. English artist Paul Morrison created "mesophyte" for the largest gallery, covering the white walls with graphic black images of flowers and trees. At first the work seems simply visually glorious, but then Morrison's tricks with scale and vantage point subtly shift the scene toward the fantastic and surreal.

Seattle artist Jeffry Mitchell also plays with the idea of visual discovery in his witty installation "The Tomb of Club Z." All you see at first is an exquisite white screen made of pressed paper and embellished with designs of the ABCs, flowers, and frolicking elephants and bunnies. Behind this lovely, innocent-seeming screen is a world of naughty voyeurism, encapsulated in a ceramic architectural model of Club Zodiac, a soon-to-be-closed bathhouse on Capitol Hill. The three-story model is shown without ceilings, but with many doors and walls, so that you are invited to peek and peer at the lustful activities — which include peeking and peering — of the clay figures within the rooms.

The themes of innocence, sensuality and watching are all present in Kirsten Stoltmann's video "Boys and Flowers," but the effect here is more dizzyingly pleasurable. Slow-motion sequences of skateboarding teenage boys, lovingly filmed with saturated color and plenty of close-ups, are interspersed with panning shots of flowers. The accompanying music is melodious and rhythmic, drenching you in a mellow appreciation of the joys of youth, beauty and movement.

Nature has long been used by artists as a way to explore ideas about perception — the way we physically process the external world. Vancouver artist Scott McFarland explores this idea as it relates specifically to photography — a medium that is often falsely assumed to operate objectively, in a factual, documentary way. McFarland's 14-foot-long photograph — a lush, vibrant scene from the Huntington Botanical Gardens in Southern California — seems straightforward enough. But knowing that he has digitally created this seamless image out of many shots makes you try to pick apart what you're really looking at, asking what's "real" in this highly realistic work.

The spaces in between these large works are filled with wonderful, smaller works culled from the collections of gallery owners William and Ruth True and their family and friends. The stunning photograph "Tulip" by Robert Mapplethorpe, James Lockwood's mysterious giclee print (Untitled), and Jeffry Mitchell's capricious collage "Rosy Peony #4" are worth the visit alone.

At the risk of abusing a metaphor, I suggest that you approach the show as if strolling through a garden. Wandering through the space, picking and choosing from the visual and conceptual delights, might help you avoid the frustration that comes from trying to decipher a tight thematic and logistical scheme. Some of the pieces — like "Make Believe," a proposal by Seattle architecture firm Universal Nonlinear Design to elevate Denny Park back to its original height — don't fit comfortably into the curatorial concept.

Logistically, there are no labels next to the works of art and the works are scattered everywhere — even in the apartment and lavender bathroom upstairs — making the guide to the works difficult to follow. But it's a stroll well worth taking. 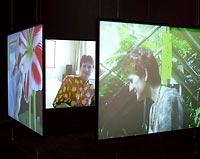 Kutlug Ataman's "The Four Seasons of Veronica Read" is a compelling video installation about the obsessive world of an Amaryllis bulb fanatic. (MARK WOODS)
Exhibit review