Everything from Tiki ornaments to wooden bowling lanes was sold at Tuesday's auction.
By Erik Lacitis
Seattle Times staff reporter

It wasn't just an auction. It was at times a bit like attending a wake. The Leilani Lanes bowling alley evokes those kinds of memories.

Yesterday, its entire contents — the three dozen wooden bowling lanes, the neon beer signs, the wooden Tiki statues that placed you smack into Polynesian kitsch — were being sold to the highest bidders.

Often, one could hear people at the auction talking about the changing Seattle. The Greenwood bowling alley, which opened in 1961, closed at midnight March 31, the property having been sold for $6.25 million for a development that will include 363 apartments.

More than 200 signed up in the lobby with the James G. Murphy Co., a local auctioneer. Some of those attending weren't expecting to buy anything. They just wanted to be there and once again say goodbye.

In bygone days, one of their first stops often was the famous fountain in the lobby, around which were displayed an array of the Tiki memorabilia — dolphins, and carved depictions of natives more familiar to lounges than anything from the South Seas.

A group of five kids was at the auction. All had worked at Leilani, earning $7.63 an hour to do everything from sweeping to going down the lanes and pushing pins that had fallen out of reach of the automatic pinsetter.

One of them was Ryan Maytash,16, who goes to Ballard High School and is on spring break. He was there with his dad, Dave Maytash, 49, who works with industrial electric meters.

Dave Maytash first brought his son to Leilani when Ryan was 6 months old. "I'd put him on his little rocker up on the counter," he said. "He'd sleep while I bowled."

In later years, the two would have breakfasts of bacon and eggs, and biscuits and gravy, on Saturday mornings at Leilani, before bowling.

"This has been my second home," Ryan said.

Pete Ekonomakis, who worked at Leilani since 1968, running the pro shop, watched the group of bidders go from the kitchen (an aluminum sauté pan, $12.50), to the restaurant (dining table, $15) to the lounge (jumbo martini glasses, $1.50 each).

Ekonomakis, looking around and recognizing many faces, understood the anger they felt at hearing the news of the alley's sale.

"They felt this was their place," he said. Even when the customers got older, he said, they still came by, to get something to eat or drink, play the pull tabs, maybe just sit and watch the bowling action.

By Ekonomakis' side was Sharon Guidri, who worked setting up kids' birthday parties at the alley, some 20 a week. She remembered how one couple, whose last name was "Lane," named their daughter "Leilani."

Kym Wells, 45, of Everett, who owns an arcade business and supplies arcade equipment to bars, paid $658 for one of the large Tiki statues. He said it will be one more addition to his home Tiki lounge, which already includes a fountain and thatched roof.

And Eric Langsted, 36, of Mukilteo, an office administrator, bought one of the wooden lanes for $200.

For a decade ending in 1999, Langsted worked the counter at Leilani. He met his wife, Monica Langsted, when she also worked there.

He was planning to install part of the $200 lane as a kitchen countertop, so that walking by it, he could remember the Leilani glory days.

On March 31, the Langsteds took their 5-year-old son, Evan, bowling at Leilani, and photographed him on that historic last day.

The Langsteds were there for the closing at midnight, when a bagpiper played "Amazing Grace."

Then, Langsted remembered, the couple and just about everyone present cried.

Katelyn Adams of Seattle, who worked at Leilani Lanes before it closed, goes through the auction catalog Tuesday to see which items she wanted to bid on. "This place has been a second home for me," Adams said. "I want to take a part of it home." (MIKE SIEGEL / THE SEATTLE TIMES)

Peter Ekonomakis, right, checks out some of the pin-reset devices before the Leilani Lanes auction Tuesday in Greenwood. He worked at the bowling alley for 25 years. He said even when customers got older, they still came by, to get something to eat or drink, play the pull tabs, maybe just sit and watch the bowling action. (MIKE SIEGEL / THE SEATTLE TIMES) 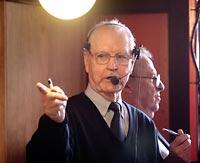