Solly used to work behind the counter but now keeps an eye on things from his upstairs office. (VIC CONDIOTTY / THE SEATTLE TIMES, 1980)
By Erik Lacitis
Seattle Times staff reporter

Fifty years of selling fish at the Pike Place Market gives Sol Amon the honor of having the longest tenure of any current vendor there. His is one of the most-recognized faces at the Market.

In his travels throughout the world, people have walked up to him in Paris, in Hong Kong, and exclaimed, "Aren't you ... ?"

Solly, as he prefers to be called, says he once was in New York City when Tom Brokaw walked up and said, "What are you doing here?" He says the former "NBC Nightly News" anchor is a regular customer in his travels to the Pacific Northwest.

Week in and week out, Solly's life has consisted of ringing up halibut steaks, salmon fillets, jumbo grilling scallops and some 90 other kinds of seafood at his Pure Food Fish Market.

At age 76, he could have retired a long time ago, gone to take it easy at his Mercer Island home, watched the sunsets with Tillie Amon, his wife of 53 years.

"I need the business more than it needs me," he says.

These days, after back surgery last year, Solly is mostly found in a cramped office a dozen metal steps above the fish market. He doesn't have the stamina for standing for a long time behind the counter.

But the fish business always has been in him.

His father, Jack Amon, emigrated here from Turkey, part of a small community of Sephardic Jews, and in 1911 began working in the fish markets.

Solly and his dad were partners in Pure Food Fish Market until his father retired.

At his office, Solly takes care of Internet orders, does paperwork and, always, is able to look through a small window at his fish market below. If he thinks some fish are not being displayed in the proper place, he makes sure that's taken care of.

Among his 15 employees is Harry Calvo, 58, who manages Pure Food Fish and who has worked for Solly for 36 years.

Calvo likes the camaraderie, he likes talking to longtime customers, he likes Solly.

He remembers what Solly said: That he would stay in the business as long as Calvo stayed.

The way Solly sees it, it's a matter of loyalty.

"I can leave anytime I want," he says. But then what would happen to Calvo and other longtime employees?

There is no one in the family to take over right now. Solly's two daughters are married and help with the bookkeeping, but they can't picture themselves out there handling fish.

Solly has hopes of his grandchildren taking over the business, but of the three, the oldest is only 15.

He remembers the day his first daughter, Eileen Kulman, 48, of Bellevue, was born.

It was a Saturday, also the biggest sales day for Pure Food Fish. Finally, Solly went to the hospital for an hour, saw his newborn child, and then went back to work.

These days, Solly shows up around 8:30 each morning. Calvo starts work at 3 in the morning to get everything ready.

He sits at a desk with stacks of shipping cardboard boxes lining the walls, not even noticing the noise from the generator that runs a machine that can produce 7,000 pounds of ice a day.

Sol Amon dons the apron of Pure Food Fish Market, which he has operated for 50 years at Pike Place Market. Amon, who goes by "Solly," has become an institution at the Market and, at 76, has no plans to retire. "I need the business more than it needs me," he says. (DEAN RUTZ / THE SEATTLE TIMES) 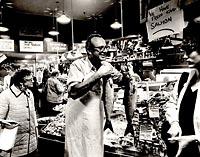 Sol Amon holds king salmon at Pure Food Fish Market, which he initially operated in partnership with his father. Amon's 50-year tenure at Pike Place Market has made him famous, and customers recognize him even when he's not selling fish. (VIC CONDIOTTY / THE SEATTLE TIMES, 1980)