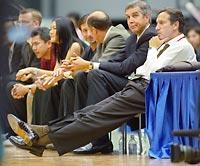 Starbucks chairman Howard Schultz, right, and Wally Walker take in a Sonics game in Tokyo in 2003. Three years earlier, the two men had sketched out a plan to buy the team. (DEAN RUTZ / THE SEATTLE TIMES)
By Jim Brunner
Seattle Times staff reporter

Ken Woolcott's family couldn't afford Sonics tickets when he was growing up, so he'd listen to the games on the radio, carefully recording the statistics of stars like Spencer Haywood and Slick Watts in a spiral notebook.

Pete Nordstrom had hoop dreams of his own. As a walk-on for the University of Washington junior-varsity squad in the 1980s, he "spent a lot of time getting dunked on by people like [UW basketball standouts] Detlef Schrempf and Christian Welp."

Both boys grew up to make millions: Woolcott at a San Diego pharmaceutical company; Nordstrom as a fourth-generation executive at his family's upscale clothing stores. They never lost their love of basketball, so when Starbucks chairman Howard Schultz went looking for partners five years ago to buy the team, they jumped at the chance.

Although Schultz generally acts as the public face of Sonics ownership, he has many partners, many of whom have not been publicly revealed. It took 58 people to put up the $200 million to buy the team in 2001. They had made their fortunes selling coffee, cellphones, car stereos and legal advice, and saw the Sonics as a different sort of investment — a civic icon that might also turn a profit.

It hasn't turned out as they'd hoped. The owners' partnership, The Basketball Club of Seattle, has lost nearly $60 million over the past five years, and local politicians so far have rebuffed owners' pleas for a $220 million KeyArena expansion. While they speak of their stake in the team as a kind of public service, the owners now say their patience is running out, and there are rumors the team already is for sale.

At a quarterly meeting today, the owners' nine-member board will consider the Sonics' future in Seattle. A public statement may be released after the meeting, though spokeswoman Valerie O'Neil said a final decision on the franchise's fate is unlikely.

In two years of debate over whether the Sonics deserve taxpayer aid, the team's ownership has remained somewhat mysterious. Though the owners have the most to gain or lose in the KeyArena debate, team officials, citing privacy, have usually declined to even name the owners. And public officials weighing the Sonics' request haven't asked.

Over the past several weeks, The Seattle Times has constructed the most complete roster to date of the investors, who also own the WNBA's Storm. Some were announced when they bought the team in 2001; others were identified in public records or interviews. Several were recently confirmed by the team for the first time after repeated inquiries by The Times. The team still will not identify about a dozen owners; some are family members of other owners.

With a combined wealth in the billions, the owners represent a cross section of Pacific Northwest money and influence. They include several of Schultz's lieutenants at Starbucks, cellphone tycoon John Stanton, University of Washington Regent Stan Barer, and former Microsoft chief financial officer Greg Maffei. The group also includes partners at two of Seattle's biggest law firms, the local inventors of the popular board games Pictionary and Cranium, and the man in charge of ending homelessness in King County.

It is a millionaires' club with solid political connections. Owners have contributed more than $2 million to state, federal and local campaigns since they bought the team. Barer is a well-known Democratic Party benefactor and hosted then-President Clinton at a fundraiser at his Seattle house in 1996. Stanton is a major Republican donor and adviser to Mike McGavick's Senate campaign.

Schultz, who declined through a spokeswoman to be interviewed for this story, cited the prestige of the owners during a February news conference in which he vented frustration with the lack of progress on a KeyArena deal in the Legislature.

"We have myself, we have the Nordstrom family, we have John Stanton from Western Wireless. We have Stan Barer. We have very senior people in the community who have built their business here, who have raised their family here, all of whom are, I think, stunned by the lack of respect that this group has been given," Schultz said.

How they came together

By November 2000, word got out that the Sonics were for sale. Seattle billboard magnate Barry Ackerley, who'd bought the team in 1983 for $22 million, needed cash to pay off business debts.

Schultz was interested. He was already a familiar sight at KeyArena in his courtside seats.

Wally Walker, then the team's general manager, also had ownership ambitions. A former Sonics player, he'd gone on to earn an MBA and work for investment firms.

As Walker recalls it, he and Schultz met for breakfast downtown, and sketched a back-of-the-napkin plan to buy the team. They thought it would be simple.

"We said, 'You call these 10 guys, and I have relationships with these 10.' We were absolutely naive about how difficult it was to raise the money. The economy wasn't doing very well. Stock markets had started their descent. That's why we ended up with 58 investors," Walker said.

Some invested on their own, others formed partnerships to split the cost. Each ownership "entity" had to come up with at least $5 million to buy a stake in the team, Walker said. The Sonics won't disclose precise ownership percentages, beyond saying that Schultz owns the single largest share.

The ownership group illustrates Seattle's interwoven corporate relationships — a network that links coffee to wireless phones to board games with just a few degrees of separation.

Take the local game inventors who invested in the Sonics under a partnership called We Got Game.

Edelstein and Kinzer have a regular weekend basketball game with Schultz, and Scene It was first sold at Sonics co-owner Nordstrom's stores.

And when Starbucks wanted to make wireless Internet access a hallmark of its cafes? The company struck a deal with T-Mobile, the company then run by Stanton. Sonics co-owner Alan Bender also was a T-Mobile executive.

Of course, the lawyers always get a piece of the action. So attorneys for two Seattle law firms that worked on the Sonics purchase also wound up investing in the team. They include eight current or former partners with Perkins Coie, who invested under the name Fast Break Partners, as well as G. Scott Greenburg, a partner with Preston Gates Ellis.

While Sonics owners are overwhelmingly local, Schultz and Walker also drew in acquaintances from farther away. William Goodwin, an influential investor from Virginia, owns a stake in the team thanks to his longtime friendship with Walker, who played college basketball for the University of Virginia. Another Sonics investor, Duncan MacNaughton, is a Hawaii businessman who cut a deal to bring Starbucks franchises to the islands in the mid-1990s.

Several owners downplay their investment. Bill Block, an attorney who heads The Committee to End Homelessness in King County, said he owns "one eyelet on Luke Ridnour's sneaker," referring to the team's current point guard.

There is no doubt the Sonics' owners, if they wanted, could pay for several KeyArenas.

Schultz's net worth has been estimated as at least $700 million by USA Today. But he may not be the wealthiest Sonics owner. Stanton, the former chief executive of Western Wireless, was estimated by Forbes magazine this year to have a net worth of $1 billion. Stanton and his wife, Theresa Gillespie, also a former Western Wireless executive, made more than $500 million off the sale of the company last year, according to SEC filings.

While they're savvy business executives, owners say they didn't get into the Sonics just for the money.

"Professional sports ownership is a tough thing to get into if you're only into it for business reasons," Nordstrom said. "You love the game, you love being part of it. I don't think the prime motivator is to squeeze every dollar we can make."

In that sense, they're no different from sports franchise owners across the country, who often buy into teams for emotional reasons.

"When was the last time somebody cheered for T-bill interest rates? But you cheer when your team is on the court, so there is a lot to be said for the psychic value of owning a sports team," said Marc Ganis, president of Sportscorp Ltd., a Chicago-based sports consulting firm.

On the other hand, people who can afford to invest in teams didn't get rich by being fools. "There is a difference between being civic-minded and philanthropy," Nordstrom said.

Not happy with deal

The Sonics operate under one of the least-lucrative deals in the NBA. Schultz has called the team's lease, which expires in 2010, "probably the worst economic arrangement of any professional sports team in the United States of America."

They only need look across town to find cause for envy. The Mariners and Seahawks get to keep all the profits from their taxpayer-subsidized stadiums while the Sonics must share cash from luxury suites and concessions with the city of Seattle. As a result, the Sonics say they can't turn a profit even if they fill every seat at KeyArena.

The owners' complaints do not sway critics who liken taxpayer subsidies for sports teams to welfare for the rich.

"It used to be there was a stigma attached to applying for food stamps when you didn't need them. I think the government ought to apply that same standard here," said Chris Van Dyk, the organizer of Citizens for More Important Things, a local group opposing the Sonics' request for public funding.

Some owners seem puzzled by such animosity. "It's essentially the business model around the entire country," said Kinzer, the real-estate consultant and part owner. "They're [professional sports teams] mostly owned by financially successful people, yet they're all in some ways subsidized by the communities they are in."

If the Seattle area won't follow that national model, agreeing to the KeyArena expansion and a better lease, the Sonics may find suitors elsewhere. Cities as close as Bellevue and as far as Oklahoma City are being talked about as possibilities.

"The free market tells us other communities, other municipalities are willing, and value NBA franchises," said Woolcott, the former pharmaceutical-company executive.

"Ultimately it's going to boil down to a very fundamental value judgment about how much does this community value pro basketball in our region."

At their meeting today, the owners will start to make their own judgment.