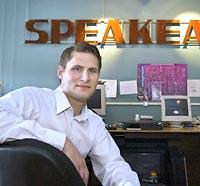 The founder of Seattle-based Internet service provider Speakeasy said Tuesday that he has reduced his role in the company to focus on a new venture called Ookla.

Mike Apgar will remain involved with Speakeasy as chairman but has stepped down from a position overseeing strategy and special projects. Speakeasy will be a 25 percent owner of Ookla, which launched earlier this week in Seattle as a provider of Web-based applications. It has four employees, all of whom work from home.

Initially, the company is spinning out two projects that began at Speakeasy. One is a file storage-and-distribution service, Filecloud, which allows users to store documents, videos and other files online and share them.

Filecloud also is casting itself as a center for computer-gaming files and is offering free access to game patches and video clips.

Apgar founded Speakeasy in 1994, originally as an Internet cafe, but three years later it began offering Internet service. In the past year, the company has shifted focus to cater to small- and medium-size businesses.

In an interview Tuesday, Apgar said the company is stable enough that he can leave to pursue new ideas.

"I was kind of hankering for a smaller company, an entrepreneurial environment," he said. "I came up with the idea to take a couple things that weren't in Speakeasy's core focus and bring them into this outside company."

He also is folding a side project, Get Local, into Ookla. Get Local, www.getlocal.com, aims to connect businesses and residents in Seattle's neighborhoods.

But that's just a start. Apgar has several ideas for projects he wants to develop quickly under the Ookla umbrella, all of which will fall under the category of Web-based tools for companies and consumers. He said he intends to keep the company small and nimble.

In addition to Speakeasy, the only other investors in Ookla are Apgar, his wife and his brother.

"I'm looking forward now to a smaller company again that I can have total control over," he said. "I'm not shy about that. I really want to take this far and make decisions quickly with a small team."

Ookla comes from a character in the 1980s television cartoon "Thundarr the Barbarian." But don't read too much into it: The name was suggested by a lead developer at Speakeasy who had owned the Web address for years.

"He suggested the name and I liked it just because it was so unique and memorable," he said.

Apgar said he told Speakeasy's board about the decision about six months ago. The board supported the move, in part because the two projects that spun out into Ookla were difficult ones for Speakeasy to exploit fully, said director Eric Zimits, a managing director at the San Francisco-based Granite Ventures.

"The idea that we can spin that out and have someone of Mike's caliber develop it into something else, it's going to be a real win-win for the company," he said.