A photo provided by the Everett Public Library shows Mukilteo's lighthouse in what's believed to be about 1930. (J.A. JULEEN)
By Christopher Schwarzen
Times Snohomish County bureau

Art Losvar remembers the large timber-laden ships coming into port at Mukilteo just before the Great Depression ran the local lumber companies out of business.

Beckoning to sailors in the darkness, affording them the security that they were traveling in the correct direction, was Light Station Mukilteo, operated at Elliott Point. Since 1906, its beam has reached out to sailors with its distinctive signal: two seconds on, three seconds off. It was marked on every regional navigational map of that time, and its beam could be seen on a clear night for 12 nautical miles.

For Losvar, it was a thrill to help the station's second keeper, E.A. Brooks, wind up the clockworks that rotated the prismatic Fresnel lens still in use today. Perhaps there was something of the sea in Losvar's blood, as his grandfather, Peter Christiansen, served as the station's first keeper.

Though ships today might rely more on radar, sonar and global-positioning-system devices, the lighthouse still offers a helpful beacon to all vessels in sight of its glow. It's among a scattering of working lighthouses that remain on the nation's coasts.

And this year, it's marking its centennial.

For residents who see the beacon as the city's icon — it's depicted on the city logo — they'd like to see it shine another 100 years. City officials and the Mukilteo Historical Society are working to make that happen.

But first, they'd like to celebrate. Events are planned throughout the year to highlight the lighthouse's century of almost-continuous service.

"Everybody was excited about it when they turned it on, and I think everybody's excited about it today," Losvar said. "It's a good thing as long as it's still there, and so far there's not much blocking its signal in any direction."

In 1905, the U.S. Lighthouse Service, an agency of the federal government, considered it a good investment to construct a lighthouse at Elliott Point. It wasn't so much to warn of dangerous coastline but to mark the way for numerous boats that slipped in and out of Mukilteo's port at all hours.

About a year later, and for no more than $27,000, the companies relying on sea transportation had their lighthouse.

The town turned out to watch the first flicker of light. For head lighthouse keeper Christiansen, it was quite a chore to keep the wick burning all night. With only a three-hour lamp placed inside the Fresnel lens to produce the signal, it was necessary to maintain a constant vigil.

Windy nights could burn the kerosene even faster, requiring changes more often. Cleaning was always a must, what with the heavy smoke residue the kerosene lamp left on the glass lens.

Brooks, the second lighthouse keeper, may have had life a little easier. In 1927, electricity from a generator on the first floor of the lighthouse replaced the kerosene lamp and produced a steadier glow.

By 1979, Mukilteo could no longer hold onto its lighthouse keepers, as the Coast Guard, now in charge of lighthouses, automated the signal. Today, a 1-inch-tall, 150-watt halogen bulb does the trick, still producing enough light to be visible from 12 miles off.

The lighthouse has seen just one period of darkness in its 100-year history, according to the Mukilteo Historical Society. World War II blackouts shut off the station's light as protective measures were imposed along the West Coast.

Mukilteo almost lost its operating lighthouse in the early 1990s, according to members of the historical society.

The Coast Guard, which had used the keepers' two residences for offices, was planning to leave and to shut down the lighthouse as well. An uproar from city residents ended such notions.

When the Coast Guard finally left in 1996, the Mukilteo Historical Society already had set up a gift shop in one of the keepers' residences and begun giving tours. Eventually, the Coast Guard handed over the property to the city, which is now responsible for the site. The Coast Guard still maintains the light.

Mukilteo now owns the former Mukilteo State Park, which sits behind the lighthouse property across a large parking lot, and the city has combined the two sites to form Mukilteo Lighthouse Park.

Mukilteo has developed a $7 million plan to improve the park, which would enhance an already-attractive tourist site, said Amy Williams, an assistant to the city administrator.

The plan, which would reconfigure parking and eliminate the lot separating the park's two parcels, is split into four phases:

• Phase one, to begin in fall 2007, would include constructing a promenade and loop path, parking spaces with a view of Puget Sound and a playground area, and doing shoreline restoration. Funding would come from the city's park-development fees and from the state.

• The second phase would encompass improvements in the lighthouse area, including new pathways and landscaping.

• Phase three calls for improvements to Front Street, a pedestrian staircase from Highway 525 and completion of a parking area in the southeast corner of the park.

• The final phase would complete the pathway system, add a pedestrian pier and create a central lawn and a restroom near the lighthouse.

All would be done in cooperation with the historical society and would partly coincide with the relocation of Mukilteo's ferry terminal, just northeast of the lighthouse, Williams said.

State ferry officials say work on a new terminal, at a former Air Force depot east of the existing pier, is scheduled for 2008, with an operational date in late 2010.

"We'd like to have it done tomorrow if we could, but only the first phase is currently funded," Williams said of the park plan. "We're looking at grant programs and other funding opportunities for the rest of the improvements."

Regardless of when the park improvements are made, visitors to the lighthouse are always in for a treat, said Ellen Koch, this year's historical-society president.

As children climb the 36 steps up the circular stairway to the top of the lighthouse, it's easy to slip back in time while looking out at Hat, Whidbey and Camano islands. For years to come, children will be able to imagine themselves as lighthouse keepers helping ships in the night, Koch said.

"This city wants its lighthouse to look its best because this lighthouse is the calling card of Mukilteo," she said.

Information from the Seattle Times archive is included in this report. Christopher Schwarzen: 425-783-0577 or cschwarzen@seattletimes.com

Sue and Rick Mitchell of Lynnwood examine the beacon atop the Mukilteo Lighthouse. (KEN LAMBERT / THE SEATTLE TIMES)

Opening the back of the Fresnel lens reveals the light's 150-watt halogen bulb. The lens is older than the 100-year-old lighthouse, which relied on kerosene before a switch to electricity in 1927. (KEN LAMBERT / THE SEATTLE TIMES) 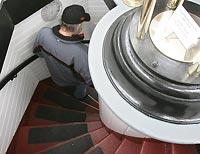 Rick Mitchell navigates the narrow stairs after visiting the beacon up top. Free weekend tours of the facility are available through September. (KEN LAMBERT / THE SEATTLE TIMES) 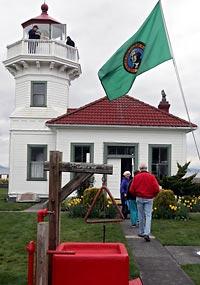 Fans stop by Mukilteo's lighthouse Saturday, the start of the visitors season. Centennial events are planned throughout this year. (KEN LAMBERT / THE SEATTLE TIMES) 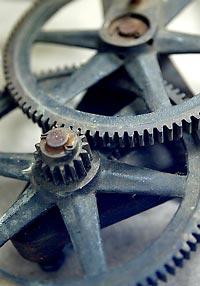 Gears that used to turn the beacon are on display inside the lighthouse. Mechanical clockworks had to be wound up to keep the light rotating. (KEN LAMBERT / THE SEATTLE TIMES)

To mark the lighthouse's 100th anniversary, several events are planned in coming months. Below is a partial list. Free weekend tours of the lighthouse are available through September. More information: 425-513-9602 or www.mukilteolighthouse.com.