Projects that have been waiting for the go-ahead to go taller include two condo towers near Pike Place Market and another condo tower close to another neon-lit Seattle icon: Elephant Car Wash.

Called a "milestone" and "turning point" by Councilman Peter Steinbrueck, the new zoning is expected to usher in a wave of residential towers in the next several years. It repeals height limits voters set on downtown buildings in the 1989 CAP Initiative, when residents feared runaway growth.

Now, in the hopes of bringing more residents downtown and curbing sprawl, buildings will be able to soar hundreds of feet beyond those limits if developers meet certain requirements, such as contributing to a fund for low- and moderate-income housing downtown.

Real-estate experts say conditions are ripe for a surge in downtown high-rises, driven largely by empty-nest baby boomers who want to live near cultural amenities.

"A lot of out-of-town developers are focused very deeply on Seattle and have not made moves yet because they're waiting for this zoning change," said Matthew Gardner, a local land-use consultant.

Several factors put Seattle on the brink of a boom, including relatively high incomes, heavy traffic and limited land supply.

"Add to that the trend of baby boomers wanting to move downtown, and it bodes well for increased density and residential development," Gardner added.

How high a building can go depends on location. Under current rules, the tallest building allowed downtown is 540 feet. Now there will be no limit.

Practically speaking, the change is unlikely to produce buildings as tall as the 76-story Bank of America Tower — now called Columbia Center — which predated CAP. The lots needed for such structures are scarce. More buildings of 40 to 50 stories are possible.

The most noticeable change to the skyline will likely occur just north of downtown, in the area known as Denny Triangle.

"Denny Triangle will no longer be parking lots primarily but will turn into a mixed-use, dense and walkable community envisioned by their neighborhood plan," said Kate Joncas, president of the Downtown Seattle Association.

But Joncas warned that requirements imposed by the council would cut into profits, prompting developers to build mostly luxury housing, rather than less-lucrative apartments and condos for moderate-income residents.

Led by Steinbrueck, who chairs the Urban Development and Planning Committee, the council increased some of the fees Mayor Greg Nickels proposed in his downtown zoning package last year.

The council and Nickels wanted residential developers who exceed current height limits to pay into a pool for affordable housing. The council approved a fee structure that charges more the higher a building goes.

That fee could help build 600 units over 20 years, doubling the amount in Nickels' proposal. A similar fee already charged to office towers could produce another 2,000 units, according to city planners.

Approved unanimously by the council, the package includes several features not in Nickels' plan. It requires developers to build energy-efficient high-rises. It mandates 8-foot-wide awnings on new buildings to keep pedestrians dry. And large office towers will have to install showers for bicycle commuters who work there.

Developers also would have to build more underground parking.

Council members also approved a resolution saying they want to create a new park in Belltown, although it's unclear where.

They also took steps to protect historic buildings and explore the possibility of building a public school downtown.

The new zoning rules take effect 30 days after the mayor signs the legislation.

Only one person spoke against the zoning package. Joyce Glasgow, a Capitol Hill resident, predicted the changes would lead to a "huge skyline" topped by million-dollar condos that would block views for others. 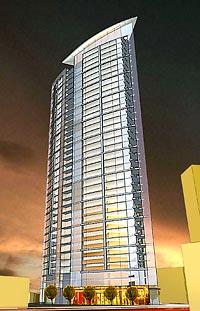 Rendering of a 340-foot-high condominium tower planned for 600 Wall St. It would be roughly 18 stories taller than current rules allow. (WEBER + THOMPSON /)

The Seattle skyline may change in coming years, as the City Council endorsed raising limits on building heights. The Denny Triangle area should see the most action, but more giants such as Columbia Center are highly unlikely to appear in the city. (JIM BATES / THE SEATTLE TIMES)