Paul Allen is known for his love of rock 'n' roll and the occasional rare appearance playing guitar with his band Grown Men. But it's a refrain from a Frank Sinatra song that popped into mind as I previewed "Double Take," a show selected from Allen's private art collection, opening to the public Saturday at Experience Music Project.

The question, in this case, is why — because there are so many other ways that make more sense. You can't argue with the paintings. Allen has great stuff, ranging here from a surreal 1625 canvas by Jan Brueghel (son of the famed Flemish master) to a knock-out 2004 bedroom scene by Eric Fischl. In between are a couple of Monets (including a lovely water lily canvas), a tiny but thrilling Picasso, a gorgeous Rothko, a striking de Kooning, classics by Jasper Johns and Roy Lichtenstein, along with assorted works by van Gogh, Seurat, Renoir, Gerhard Richter ... You get the picture. It's not every day in Seattle that we get to see a lineup of this caliber under one roof.

But you've got to wonder what motivated Allen to show it under the roller-coaster roof at Experience Music Project, which was not built to display fine art. It's commendable that Allen wants to share part of his collection with the public, and I hope he'll continue to seek ways to do that, but in "Double Take" the work has some huge handicaps to surmount.

As visitors arrive, they will first be herded into a video presentation (produced by Big Buddha Baba Productions of Santa Monica), that with a cheeky, almost flip tone and lots of special effects, delivers the basics of composition, perspective, color, surface and content. At one point, in a discussion of surface texture, a narrator blurts "Wow, looks like the moon," before punning "One small step for Monet."

The perky, gee-whiz style of the primer drove me nuts. Asked if viewers would be able to bypass the video and enter the art exhibition directly, EMP spokesman Christian-Philippe Quilici said "It may be an option."

The gallery that holds "Double Take" is a cavernous space that nearly swallows the show. Reconfigured by a New York design firm, the Rockwell Group, the room remains mostly black from floor to ceiling, except for the added beige linen-covered portable walls the pictures hang on. The asymmetrical space makes an awkward gallery with no natural light, punctuated by a couple of massive metallic pillars. The pillars obstruct views of the art and make navigating the exhibition tricky: You can get up close to that Manet cityscape of Venice, for example, but you can't step back. The lighting makes some paintings, particularly those with darker surfaces, difficult to appreciate.

The concept behind "Double Take," was devised by Paul Hayes Tucker, an art-history professor at the University of Massachusetts and authority on Impressionism. He decided to pair Impressionist and Post-Impressionist paintings with works from other time periods as a way of pointing out the formal relationships between the pictures. The exhibition, as laid out in Tucker's catalog essay, is assembled as an art-history lesson, a survey course geared to audiences who don't have much experience looking at paintings. If "Double Take" were a classroom art-history lesson, presented in the form of a slide show, it would probably be dynamite. The trouble is that paintings, like human beings, have their own characters and needs, far beyond the intellectual issues you can study in images reduced to transparencies and flashed side by side.

Tucker tried to deal with that problem by removing a number of pictures from their "traditional" frames and putting them in tight black or white box frames. This, he said in the recorded audio-guide, would help us see the painting "without the confines of history that frames often impose."

In theory, that makes sense. Take the pictures out of their period frames, put them on an even playing field, side by side, and let people see the threads of similarity that are the foundation of art. But Tucker didn't carry the idea across the board. Only some of the pictures were reframed, some in black boxes, others in white ones, with no breathing room between the frame and the edges of the picture. It's as though they've been forced into straitjackets. Tucker's point was to make the frames disappear. Instead the hodgepodge of frames in different styles and colors dominates the show, not to mention the individual pictures. What that heavy white box frame does to Rothko's glorious 1956 "Yellow Over Purple" is a travesty.

"Double Take" is also inconsistent about matching up pairs of pictures; in certain cases Tucker chooses three or even more images to play off each other. One grouping of four pictures, all cityscapes of Venice in period frames, stands nicely on its own. It's a wonderful stroll through a progression of painting styles, from the crispness of Canaletto's 1738 view of the famous city to the hazy dissolve of sunlight and mist in J.M.W. Turner's take on it in 1841; then on to the vitality of Manet (1874) and the shimmer of Monet (1908). Each artist inspired by the same place, each letting his temperament, his time and his imagination lead him to a different conclusion.

There's an adage that nobody really owns great art but simply helps take care of it for future generations. The question this exhibit raises for me is: How could Paul Allen better serve his amazing art collection? Here in Seattle, there are a number of examples, beginning with the Frye Art Museum. The Frye was built to house a private collection and is open free of charge to the public. Virginia and Bagley Wright have an elegant private gallery to show works from their collection, which will eventually be donated to Seattle Art Museum. Bill and Ruth True are likewise committed to sharing their artworks, in their own art-space Western Bridge and with public institutions.

Few collectors are privileged to live with works on par with those Allen has acquired. Yet I can't recall another exhibition where the art is so good and the art experience such a let-down. 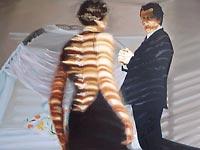 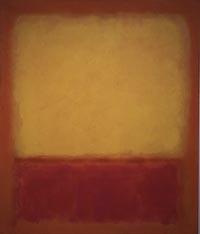 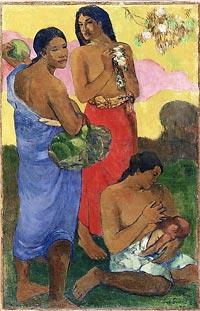 EMP/SFM members as well as members of Seattle