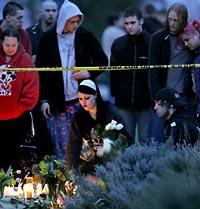 Brynna Entwistle adds flowers to a memorial to the victims. (THE SEATTLE TIMES)

In the aftermath of a mass shooting that took the lives of six Seattle area young people, including two girls ages 14 and 15, there is plenty of finger-wagging. In the mix is the city's all-ages dance ordinance, which must be thoroughly re-examined and re-tooled.

Four years ago, Mayor Greg Nickels and the City Council worked to ease earlier dance restrictions because they were thought to be hamstringing the music industry. The idea was to provide music and dance venues for teens and young adults. The new rules are too lax to protect teenagers. Teens 14 and 15 should not be socializing with people in their 20s and early 30s, as they were last Friday night and Saturday morning on Capitol Hill. An earlier law in effect until 2002 restricted teen dances to ages 15 to 20; teens under 15 would only be admitted with a parent.

The new law has no age floor. A 10-year-old can attend dances along with 30-year-olds. This is asking for trouble, although the obvious trouble anticipated is not homicide.

The earlier law required at least one-fourth of the total security force to be sworn law officers. Requirements for security-officer credentials were reduced by the new law. The old rule required dances to end at 2 a.m. The are no end times now.

The dance where victims gathered and met the shooter ended around 4 a.m. The shooter was then invited to a private party.

A reasonable closing time makes more sense. Few good things happen for teens after midnight. Dance clubs are places where many people go to socialize and have fun. Others go because they plan to victimize and prey on young people whose decision-making skills are limited, especially in wee hours at places where access to drugs and alcohol is not difficult.

The violence that occurred last weekend did not take place at the dance or rave. And, technically, a rave, for some bizarre reason, does not fall under the current all-age dance ordinance. But it should be included in a more-restrictive, new law.

The dance party served as a set-up for the next gathering, where teens ages 14 and 15 spent the early morning with older teens and young adults up to age 32, including the 28-year-old shooter.

America's gun laws are part of this tragedy. Any society that allows a demented man to load half a gun store into his truck has to rethink its nutty gun policies. Parents also play a huge role. A curfew of 3 a.m. for a teen is very similar to no curfew at all. You may trust your own child but why trust the people your child encounters at those hours?

The teen dance ordinance must be re-examined as our community takes a variety of necessary steps to better protect vulnerable teenagers and young adults.