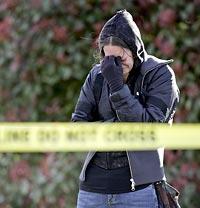 K.C. Bosq is overcome at the scene of the multiple murders on Capitol Hill. Bosq said her boyfriend had been at the house and that she did not know his whereabouts. (JOHN LOK / THE SEATTLE TIMES)
By Seattle Times Staff

After partying peacefully all night with young people he'd met at a nearby rave, the heavyset man left an east Capitol Hill home around 7 a.m. He returned minutes later, draped in ammunition belts and armed with a 12-gauge shotgun and a semiautomatic pistol.

His first victim was gunned down on the front steps, the second on the porch. Pandemonium broke out as partygoers dived out windows while others tried to hold the front door shut in the face of a fusillade of shotgun blasts.

He killed six young people Saturday morning before turning the shotgun on himself as a police officer confronted him. Two others were hospitalized with gunshot wounds.

Seattle Police Chief Gil Kerlikowske described the man as "quiet and humble" but knew little else about a mass killer whose crime is among the worst in Seattle history, eclipsed only by the 1983 Wah Mee Massacre that left 13 dead.

The killer remained an enigma Saturday night. The one message he left behind: the word "NOW" spray-painted on sidewalks and the steps of a home nearby.

"We have absolutely no idea of what the motive is," Kerlikowske said.

The killer was in his mid-20s, came to the area five years ago from out of state, and had had "very little" involvement with police, Kerlikowske said. The chief did not elaborate except to say his record was nonviolent. The shooter's identity was being withheld.

Kerlikowske said the victims ranged in age from their midteens to early 20s.

A witness said the man was "sloppy," about 6-foot-1 and dressed entirely in black. Witnesses said he had been invited to a party at the home after a large "zombie rave" Friday night at the Capitol Hill Arts Center. The dance had been billed "Better off Undead" and partygoers were given a discount on admission if they dressed up as ghouls and zombies.

Witnesses told police that there had been no altercation either at the rave or at the after-hours party at a small blue frame home in the 2100 block of East Republican Street. The chief said alcohol and marijuana were present in the house, but could not say whether the shooter or the victims were intoxicated.

The man left the home around 7 a.m., apparently to arm himself at his pickup parked a block away. Officers later found an assault rifle and several large-capacity ammunition magazines in the vehicle.

On his way back to the home, the man sprayed the word "NOW" in orange paint on the sidewalk and steps in front of several homes leading to the house party.

"We have no idea what that means or what significance it has," the chief said.

As many as 30 people were in the house when the man approached, draped in bandoliers of ammunition and armed with a handgun and a pistol-grip, 12-gauge shotgun — a weapon Kerlikowske pointedly said was "not for hunting purposes, but for hunting people."

Kerlikowske said the man forced his way into the home, firing randomly.

"He wasn't going after just one person because he was letting off all these rounds," said Garry Will, 20, who was inside the home with his 17-year-old girlfriend. "Everybody was cool and chill and then this guy showed up and started firing rounds out on the porch. He shot a guy and then came inside and started letting off rounds."

"[The shooter] came upstairs and tried to open the door," Will said. "He shot a round through the door and the bullet whizzed by my face."

Police on Saturday had not released identities of the victims. However, relatives and friends confirmed that two of those who were fatally shot by the gunman were Jeremy Martin, a 26-year-old musician and wine salesman, and Christopher Williamson, 21.

Residents of the east Capitol Hill neighborhood where the shooting took place woke to the roar of gunfire.

"It sounded like it was all around my house," said next-door neighbor Barbara Deasis. "I looked out the kitchen window and saw a body on the steps next door ... ."

William Lowe, who lives across the street, had just awakened when he heard two shotgun blasts, followed by two gunshots from a handgun and then two more shotgun blasts. Lowe said he looked through his peephole and saw an injured man stagger out of the house.

"He was obviously wounded and he was disoriented," Lowe said.

When the man opened fire, people poured from the house in search of a place to hide, said Jakob Kayser, 22, whose backyard abuts the rental home.

Kayser said two young men and a young woman, all appearing to be in their late teens or early 20s, pounded on his back door. They demanded to use his phone to call police.

They told Kayser that one of their friends was dead and another was bleeding heavily. After calling for help, the three took off, he said.

As police swarmed to the scene, uninjured partygoers were loaded into buses and taken to police headquarters to be interviewed.

Nancie Thorne, whose 15-year-old daughter, Suzanne, was in the house, learned about what happened when Suzanne's 18-year-old boyfriend called her Saturday morning.

"It's the worst phone call a mom can get," said Thorne, who went to the Capitol Hill home after getting the call.

Late in the day, a family spokeswoman declined to answer questions about what had happened to the girl.

Four young men and two women were killed by the gunman, the chief said. Five died at the scene and a sixth at Harborview Medical Center.

Two others suffered serious gunshot wounds and were at Harborview. Police have interviewed one man in the hospital and say he was coherent. A second has "life-threatening injuries," said Officer Sean Whitcomb.

Will, who hid in the bathroom, said the gunman headed back downstairs as sirens were heard in the distance. Kerlikowske said victims and partygoers were "running out of every window and door in the house."

Seattle police Officer Steve Leonard was on patrol in the area and heard the gunfire. It took him about a minute and a half to respond to the home, the chief said. Leonard found a wounded partygoer on the sidewalk, drew his weapon and placed himself between the home and the injured man, the chief said.

At that moment, the shooter came out the front door.

Lowe, the neighbor, said he had ventured out onto his porch when Leonard confronted the shooter.

"The officer said, 'Drop your ... ' and the guy put the shotgun to his mouth and pulled the trigger," he said.

The home is in a quiet, neat neighborhood on east Capitol Hill. The houses are well-kept and the yards clean and well-tended. It was rented by several young people who share a love of techno music, friends said.

The roommates included a chef, a baker, an engineer, a wine merchant and a performance artist, said Rahul Gairola, 31, who was at the home Saturday afternoon to try to find out what had happened to one of the roommates, a woman he had met at the University of Washington.

"Music brought them all together," said a friend, Aaron Hoyle.

The house was the scene of frequent late-night parties, neighbors said, but Kerlikowske said it wasn't considered a problem.

The "Better off Undead" party, a benefit dance featuring nine DJs, drew about 500 people to the Capitol Hill Arts Center on Friday night, said Annika Anderson, the party's promoter. Private security patted down those who attended, and the dance was peaceful fun, she said.

The dance and the house party where the shooting took place had no connection except that both drew from the tight-knit community of electronic music, said Anderson, a 24-year-old theater teacher who goes by DJ Jimni Cricket.

Several of the residents at the house where the shooting took place were DJs specializing in "Goa," a hippie subculture of electronic music. Anderson said she was too busy with the dance to drop in on friends at the house party.

"This is awful. It's tragic," Anderson said. "I wish to God there's something I could do to change it. When you do a concert, you do pat-downs. But a house party, you don't know what can happen."

Matthew Kwatinetz , the artistic director of the Capitol Hill Arts Center, said about 200 to 300 people were at the center at any time. People were coming and going and he said a crew of about 15 security guards searched people for drugs, alcohol and weapons.

A rave party, more often called a rave and sometimes called a free party, is typically an all-night dance where DJs and other performers play electronic dance music.

"It was very mellow, easy and friendly," Kwatinetz said. "There were no problems, not even a raised voice. It was one of the funnest events I've been to."

Saturday afternoon, a small group of people who had been inside the house stood smoking outside police headquarters in Seattle after interviews by detectives. Most declined to talk, saying they needed food and sleep before they could begin making sense of the tragedy.

A couple of them wore paper jumpsuits because they hadn't had time to dress before hurrying out of the house. One man had blood smeared along his neck; another had blood on the legs of his jeans.

"Welcome to the Columbine of Seattle," said one young woman who declined to give her name but said her boyfriend had been shot.

"He's on the operating table now," she said.

Workers in white from the Medical Examiner's Office process evidence outside the house where seven people, including the gunman, died early Saturday. (ALAN BERNER / THE SEATTLE TIMES) 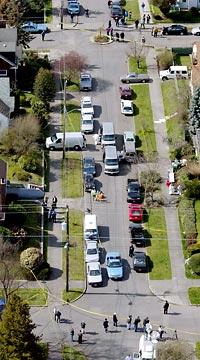 The view down East Republican Street, with the crime scene to the right, shows investigators, officers and onlookers surveying the shooting scene amid a crisscross of yellow police tape cordoning off the block. (ALAN BERNER / THE SEATTLE TIMES)

Neighbor William Lowe, who saw a victim come out of the house, walks past the scene of the shootings along the 2100 block of East Republican Street. Residents of the Capitol Hill neighborhood woke to the sound of gunfire. (GREG GILBERT / THE SEATTLE TIMES)