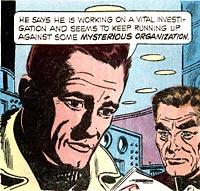 Comic book based on the TV series "The Man From U.N.C.L.E." (DETAIL FROM "THE MAN FROM U.N.C.L.E.")
By Mark Rahner
Seattle Times staff reporter

This month's new shows "Heist" and "Thief" aim to brace the crime genre with cool crooks, but they're bush-league next to "Hustle," a British import already airing on cable's American Movie Classics.

in "The Man from U.N.C.L.E.," stars as the ultra-smooth Albert Stroller, elder statesman to grifters who set up assorted rascals for intricate "long cons."

We grilled Vaughn, 73, from his Ridgefield, Conn., home about the exuberantly stylish series that vibes "Ocean's 11" by way of "Mission: Impossible" — as well as his "U.N.C.L.E." dossier and his penchant for "cat suits."

Q : Have you ever been conned?

Q: Your gang only fleeces people who deserve it.

A: Well, deserve it or could afford it. People who want to be involved with the kind of schemes that we do are usually people who are somewhat on the other side of the law to begin with, or they're very, very wealthy and can afford to lose whatever money they're investing in terms of a con of any kind. They know that they are part of the con. In other words, you can't cheat an honest man, they say.

Q: You've said that Albert is who Napoleon Solo might have become.

So I said, "Well, let me look at it this way: Suppose that Napoleon Solo, after he retired on his government pension, realized that he couldn't enjoy the wonderful life that he had before that, the casinos, the thrilling women and wonderful cars and travel throughout the world and so on.

"What could he do that ... could make him possibly a happy person again in terms of money and travel and all that stuff?" I said, "Well, of course he could be a con man."

A: (Laughs.) They did not mention it. They all mentioned "Teenage Cave Man," which is perfectly all right with me, because I always find it very funny. It's kind of like Jerry Lewis and the French. A lot of people like "Teenage Cave Man" — for what reason, I don't know.

Q: You're the last of "The Magnificent 7," which is out on a special-edition DVD. What was the filming experience like?

A: It was very enjoyable, but the general feeling among the cast, with the exception of (Yul) Brynner, because we didn't talk that much with him, was that we were going to be in a real bomb here, because there was no script. They would literally stick pages of onion skins under our door at night and that's what we would shoot the next day. They made it up as we went along.

Q: What was your impression of Steve McQueen?

A: Well, I got to know Steve very well during the time that we were down there (in Mexico). We were there for three months and his room was directly next to mine. We had a connecting door, and Charlie Bronson was on the other side with his connecting door.

Q: The noises you must have heard ...

A: (Laughs.) Yeah. And I remained friendly with Steve all up through up to very close to his death. We did two other pictures together, "Bullit" and "The Towering Inferno." He worked, I think, when he was 19 on a ship and there was a lot of asbestos on the ship, and he convinced himself in the last couple months of his life or last year of his life that he had acquired some kind of asbestos poisoning, and that was causing him to have very problematic lungs and various other interior problems physically. He of course was able to discount somehow the 10,000 joints he smoked and 10,000 regular cigarettes.

A: I believe it is coming out this year. The first year was shot in black-and-white. It was one of the reasons it didn't sell quickly as a DVD item.

Q: Will you be doing interviews and commentary?

A: Yes, absolutely! It's amazing that people come up to me all over the world, no matter where I travel and remember the show very fondly — much more so that I ever thought when I was doing it, that it had that kind of cachet that would intrigue the entire world.

Q: What was your first sign that "U.N.C.L.E." was such a phenomenon?

A: Well, I was kind of aware of it, but I became very aware of it the first time I traveled to London. The plane got in about midnight and Heathrow Airport was filled with young girls, and I had no idea what they were there for, but I learned very quickly that they were there to meet me — or to see me.

And I was absolutely dumbfounded. Matter of fact, I have a sequence of pictures where in the first one you see me coming down the stairs from the plane ... and I'm dressed very well, my tie is tight, I had a lovely coat on, and so on.

And there are other pictures along the way where you see girls jumping at me, and the last picture is of me getting into a limousine where my head is cut, my hair is in my eyes, my tie is over my shoulder. And that's when I knew I was in a hit.

A: I did "The Protectors" in '71 and '72 and '73. I lived in London the entire time with my then-girlfriend, now wife, so we started our years together in the most lavish way possible.

Q: How huge is "Hustle" in England?

A: Very huge. ... I got out of a taxi to get into my flat where I was living. I gave the taxi driver a fiver, he took it, put it up in front of his face, looked toward the sun and said, "Is this any good, mate?" I knew the show was going to be a hit.

Q: How do you spend your free time at home in the States?

A: I'm in the process of finishing my memoir, my autobiography. It'll be out this Christmas. It's called "A Fortunate Life — Robert Vaughn Reminisces."

Q: Your favorite attire is sweats, which is somewhere between Albert and the cave man.

A: Yes, it is definitely between Albert and the cave man. I wouldn't use the word "sweats." I'd use "jump suits." We have pretty good quality running suits or track suits in New York and that's what I'm wearing as we speak right now. They're kind of satiny.

It's what Churchill used to wear. He called it a cat suit. It's a one-piece thing that zippers up to your neck from your crotch and you just step in it and step out of it. It's very comfortable, and I wear that with — well, they call them in England, they call them trainers. I call them Nikes.

Q: You're just a piece of bling and a reefer away from being one stylin' pimp!

A: Yes, well I still have all my wardrobe from "Pootie Tang." I break it out at Halloween all the time. 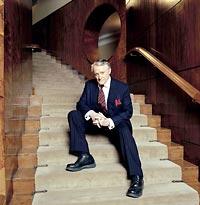