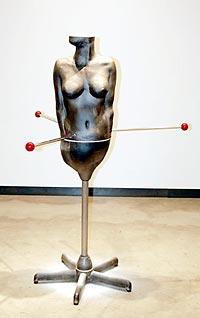 Two exhibits explore religious themes at a time when religious conflicts have become very politicized. The artists go beyond dogma and provide unique and personal interpretations.

At Seattle's Howard House, a white pile of powder has spread at the base of "Wife," Lauren Grossman's figurative sculpture. Footprints are left on it as people move around while turning the levers that grind rough salt crystals. Flecks of the stuff might have gotten underneath the soles of shoes, carried off outside the gallery and into the street. If so the salt has served its purpose, spreading and dissipating into life.

The piece captures the pitch-perfect tone of Grossman's exhibit. "Wife" derives from the story of Lot's wife, who turned into a pillar of salt because she looked back on her city while it was being destroyed. Like Eve, she gets punished for her curiosity.

Grossman picks up the mantle of this curiosity and takes it to a practical, if humorous end. Salt, after all, is a commodity — why not fulfill its social use by inviting spectators to share in the grind.

Though the exhibit makes abundant references to the Bible, the intent is to celebrate form. Figures of birds and lambs shaped from biblical text are literally the Word made flesh, but in a way that remains open to interpretation, presented as they are with Grossman's wit and inventiveness.

References to machinery continue in these pieces. A tug activates a whistle on one of the birds, gears and pulleys spin a pair of lambs. As in "Wife," they provide a sense of the absurd to temper the somberness of their religious origin.

In "Ecce Agnus," a pedestal underneath a torso contains three wheels turned in such a way that they can only move in an endless circle. The restriction echoes the truism in a number of religions and myths that spiritual movement is not linear but a transcendent cycle. This movement may also be said about art and provides the driving force that makes Grossman's work such a success.

At the Kirkland Arts Center, the upward slant of the ladder in Jon Gierlich's "Falling Away" and the incline of the plank in Gail Grinnell's "Scrap" make all the difference in a show about transformation.

The pieces are part of "Altared," a group exhibit curated by Donna Lindeman Porter and Lois Harbaugh. Inspired by the proliferation of roadside altars they saw on a trip to India, the curators invited artists to create their own interpretations of the altar theme.

It must have been cathartic, compelling many of the artists to create work that deviates from their usual styles to dig into old and new griefs, respond to events in the world and explore mythical realms. An abundance of symbols and effects are put to use: statues, bones, found objects, clippings, photographs, detritus, mementos.

Few of the pieces are religious in the conventional sense. Instead of encouraging worship, these altars mourn, rage, poke fun, contemplate.

Fewer still look into the question of the philosophy behind altars as thresholds and portals between this world and the next.

Pieces such as Don Myhre's "Devotion or Denial," an altar shape composed of crosscut pieces of wood whose grains are aligned to resemble a vagina, close in on themselves.

In contrast, Grinnell's plank has been worked — dug into, sanded, drawn on — but after all that, the incline suggests a final rest, and moving on.

And in Gierlich's piece — inspired by the Palestinian conflict — if heaven does exist, it might open up like these panels: translucent, multi-faceted, breathtakingly plain. 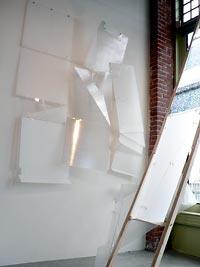