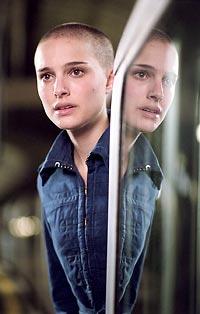 And you thought "Good Night, and Good Luck" was overtly political.

It's safe to say they probably won't be passing the popcorn for "V for Vendetta" aboard Air Force One. The latest comic-to-screen adaptation is such a provocative statement that you'd never guess it came from the boneheads behind the last two "Matrix" movies. If suicide-bomber flick (and Oscar nominee) "Paradise Now" caused a stir, let the arguments begin for "V": Where's the line that separates a terrorist from a righteous rebel? And is it just the powers-that-be who define those terms?

When a young London woman named Evey (Natalie Portman) is about to be raped by three police thugs at night and after curfew, a masked vigilante dispatches them with some fancy knife-work and saves her — then takes her to a rooftop to watch the Old Bailey courthouse detonate as "The 1812 Overture" plays.

Batman this ain't. "V" (Hugo Weaving, aka "The Matrix's" Agent Smith), wears a smiling Guy Fawkes mask. As the movie conveniently explains for Americans who don't know history, Fawkes was the guy who got caught trying to blow Parliament to kingdom come on Nov. 5, 1605 — Guy Fawkes Day. While Fawkes wanted to end the persecution of Catholics, V wants to finish the job and stop the persecution of gays, Muslims, people who want to speak freely without being "black-bagged" by government thugs, and everyone who, as the movie puts it, has traded order and peace for obedient consent.

"V for Vendetta," with Natalie Portman, Hugo Weaving, Stephen Rea and John Hurt. Directed by James McTeigue from a script by the Wachowski brothers, based on the graphic novel illustrated by David Lloyd. 132 minutes. "R" for strong violence and some language. Several theaters.

To rally citizens, V walks into the state-run TV station with a DVD to broadcast, and explosives strapped to his chest. You can start to see how people might have been a little touchy about this movie, whose release was delayed following the London bombings last summer. (The studio denied that was the reason.) Anyhow, after Evey returns his favor and stops him from getting shot, she wakes up in his secret lair, a fugitive from police, not to mention lawyers from "Phantom of the Opera" who may note the similar scenario.

There, they bond over the bummer of life in 2020: Government trucks do random audio sweeps. After "collateral" and "rendition" took on sinister meanings, " 'different' became dangerous." A "national security project" whose "true goal was power," and a religious regime with "no regard for the political process" led to government ruled by a Big Brother-like High Chancellor (John Hurt, who, by the way, played Winston Smith in "1984").

"I want everyone to remember why they need us!" the Chancellor shouts to his henchmen from a huge screen. Namely, convince them that they're continuously (and falsely) on the brink of chaos.

Comics genius Alan Moore wrote the story more than 20 years ago as a swipe at Thatcher-era England and set it in 1997. It's been updated.

And improved. This is the best adaptation to date of Moore's work, but that's not saying much. He stopped putting his name on or accepting filthy Hollywood lucre for films because of the awful "League of Extraordinary Gentlemen" (2003) and the tolerable "From Hell" (2001), which bore scant resemblance to its source.

"V" won't win the Subtlety in Film Award, but fans of '70s movies especially will recognize that it's hardly out of line with the tradition of speculative fiction during times of strife. The look and action are nifty enough to outweigh a little awkward pacing. Portman, despite evidence from the last "Star Wars" trilogy, can act. And it'll give all those gas-bags on talk radio something to argue about for weeks. 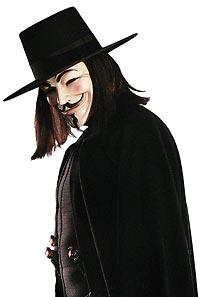 Hugo Weaving is V, the man in the Guy Fawkes mask who has a violent agenda for those in power in 2020 London. (WARNER BROS. PICTURES :)