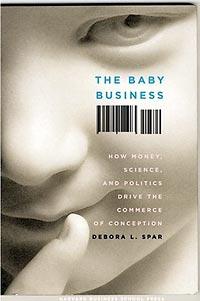 Infertility in America has become a string of titillating anecdotes, one long episode of "Oprah": "The surrogate took our baby." "Our baby has three mothers: Which is the real one?" "I used my dead son's frozen sperm to make a grandchild." Heartwarming, heartbreaking — these stories are all heart. We are so busy emoting that we never stop for a moment to think: What on Earth is going on here?

Fortunately, the very sharp-eyed, clear-headed and unsentimental Debora L. Spar is not so easily distracted by these inconceivable tales. She has chiseled through the encrusted anecdotes, hardened her heart against the saccharine language of "miracle babies" and "angels," cast a skeptical eye at the doctors trying to cloak all infertility in medical necessity and recognized what no one involved in infertility wants to acknowledge (or wants their customers to know): that it is a business. In fact, it is more than a business: It is an industry. It is the fertility-industrial complex, and its product is babies.

"The Baby Business" is as smart and sensible a book as you could hope to find about such a charged subject. She leads readers step by step through the fertility industry; from the relative simplicity of sperm donation; to the greater complexity of egg donation and surrogacy; to the cutting-edge medicine of in vitro fertilization (IVF) and Pre-Implantation Genetic Diagnosis; to the oldest infertility treatment of them all, adoption.

The principal point of "The Baby Business" is that making babies these days doesn't always involve the old-fashioned method. There are 8 million infertile women in the United States alone, and they are spending around $3 billion a year to try to conceive. There is not a market for babies — propriety restrains all but the most desperate and demented from actually buying children — but there is a market for everything else: sperm ($275 a vial), eggs (up to $50,000 apiece), nine months' use of a womb ($20,000), the creation of an embryo ($12,000 per cycle).

The fertility-industrial complex is a stunning array of businesses — practically a microcosm of the global economy. It includes the manufacturing of fertility hormones, harvesting of renewable natural resources (sperm and egg collection), international trade (foreign adoptions), expert services (IVF and other high-tech medicine) and even rental real estate (surrogate mothers) and long-term storage (embryo banks).

What is perhaps most interesting about "The Baby Business" is what it's not obsessed with. Spar doesn't fixate on ethics. She writes about cloning but doesn't spin utopian or dystopian scenarios involving cloned and enhanced superkids. Her concerns are much more mundane. Fertility treatments are troubling not because they could lead to a genetic elite or clone armies or other horrors, but because people are getting ripped off. Not enough people are getting fertility treatments, and those who do are paying too much.

Spar asks why our infertility markets don't work as well as they should. The first and most important problem is that the customers — usually infertile women — are too desperate. "The clients' demand for the 'product' is exceedingly strong. They are willing to try anything — repeated rounds of hormones, multiple surgeries, pregnancy right after cancer — and they are essentially unwilling to give up." The result is that the normal restraints on a market are absent. Women will drop $100,000 on round after round of failed IVF treatments. Their doctors, who profit from every new attempt, are put in an awkward position, one financially rewarding but ethically unsound.

The second major problem with the fertility market, Spar says, is that no one who works in it wants to acknowledge it exists. The brokers who recruit egg donors and surrogates tend to portray themselves and the women they recruit as good Samaritans. Fertility doctors duck behind the shield of Hippocrates. They deny that what they are doing is commercial: They insist they are just trying their latest new, risky treatment to help their suffering patients, and don't point out that each of these new techniques makes them a fortune.

This pretense of noncommercial activity makes infertility very opaque for customers: They don't know whether they ought to be paying what they are paying, or if they are getting a good service, because the usual market checks — information, competition, transparency — are absent.

And finally, Spar writes, the American approach to infertility has left it particularly chaotic. Almost every other developed nation regulates fertility treatments more systematically than the United States does; some, such as Israel, have extensive state subsidies for certain treatments, while others, such as Germany, ban practices that are common here, such as surrogacy or anonymous sperm donation. The American left has not wanted to regulate fertility because it intrudes on women's reproductive choices, which disturbs pro-choicers. The American right has not wanted to regulate fertility because it appears to be a functioning and free market. The result is a Wild West.

The result, Spar says, is an ugly chaos. People make contracts that can't be legally enforced. They travel across the country to states that permit practices that their state might ban. Those who live in states where insurers have to cover infertility avail themselves of the latest techniques to get babies, while those elsewhere bankrupt themselves for much worse treatment. Would-be parents contract with one woman for an egg and another for a womb, leaving the law baffled about which of the three mothers is actually the legal one.

This baby business can't be eliminated, but it could work better. Spar, with the pragmatic streak that runs through the book, rejects various foreign models that would never work here. In many European nations, a massive state apparatus decides who can get which kind of treatment. Americans would bristle at such government control of their reproductive rights. What American fertility needs instead, Spar concludes, is a modicum of regulation: a system of property rights, more consistency from state to state about insurance and laws, and more transparency. The result would be lower prices and more customers. "The Baby Business" looks forward to an America where fertility treatments are less miraculous and more ordinary, less Oprah and more Wal-Mart.

David Plotz is deputy editor of

Slate and author of "The Genius Factory: The Curious History of the Nobel Prize Sperm Bank."