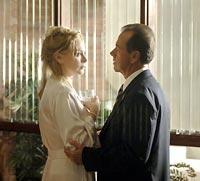 "He said to me, 'Finally, Mom, you're doing something really cool' — that was the clincher [in taking the role]," Smart said of her son, Connor, 16.

They watched Season 4 of "24," which stars Kiefer Sutherland as Jack Bauer, who races against the clock to foil the schemes of terrorists. Each season occurs over the period of one day.

"We were instantly hooked," said Smart. "He's been to the set and loves it. He's even brought some of his friends. ... I had to swear them to secrecy. I told them I could either be killed or out of a job or both. So far, they've kept mum."

Smart, 54, was raised in Seattle and graduated from the University of Washington. She acted in the Seattle Repertory Theatre before going on to make a splash in 1986 as Charlene Frazier on "Designing Women." She played Charlene for five years, and met her husband, Richard Gilliland, Connor's dad, on the show.

Now, she's returned to episodic TV with a vengeance. Known for its deft plot twists, "24" (9 p.m. Mondays on KCPQ) features characters that can change on a dime.

"It goes against your instincts as an actor," Smart said. "You want to be specific about your character. However, things change, relationships change very quickly. You have to be cautious about committing to certain things, because you can find out a few episodes later that you were lying, but you didn't know you were lying [at the time]. You never know."

Does she know if she'll even survive the season?

"You're assuming that I know about future episodes — I really don't," she said. "You're going in knowing that you can last two weeks or a whole season. Gregory Itzin [who plays President Charles Logan] was originally supposed to be in three episodes, but look what that's turned into."

Smart's Martha Logan is a far cry from "24's" previous first lady, the conniving Sherry Palmer (Penny Johnson Jerald). Martha, a conspiracy theorist who has spent time in a mental institution, is loosely based on Martha Mitchell, the wife of Nixon-era Attorney General John Mitchell, whom critics dismissed as delusional during the Watergate scandal.

"In her first scene, she has such a great introduction — she dunks her head in a sink," recalled Smart. "[The producers] told me to play the first lady as a loose cannon. She's a little impulsive, but her heart's in the right place."

Of her onscreen husband, she says, "Gregory's such a great guy and a wonderful actor. He arrives on the set wearing a denim jacket and blue jeans. He also has tattoos and pierced ears. Then he gets in his trailer and once he comes out, he's President Charles Logan," she said. "We sing Broadway show tunes between takes because we're both frustrated musical-comedy stars."

One of the things Smart likes about her role on "24" — uncertain though it may be — is that it's an established show with a strong following. "I don't feel the responsibility for making the show work," she said. "There's no pressure."

Smart says she still misses Seattle. "It's a great place to grow up," she said. "It has a fabulous downtown, where you have all the culture: tons of live theater, a world-famous opera company, a world-famous ballet company, comedy clubs.

"People are very friendly in Seattle. We're in close proximity to Canada and Canadians are some of the friendliest people I've met — they even joke about it — maybe that's where [Seattle residents] got that influence."

Smart was recently a guest speaker at an Alzheimer's fund-raiser at the Fairmont Olympic Hotel and spoke to drama students at the UW. "It was fun walking around campus. ... It's a great place to go to school."

"She was a really, really interesting character to play," Smart said. "On one hand, I was incredibly sympathetic toward her. On the other hand, there was no doubt that she was guilty. She was so tragic in the sense that the minute she was born, she was doomed. ... She said she killed the first man in self-defense. After that, she found excuses to kill men, provoking situations. It was tragic from all angles."

Over the past decade, Smart has been seen in films like "Garden State" and "I [Heart]Huckabees." She was nominated for a Tony for the Broadway farce "The Man Who Came To Dinner." She also won two Emmys for her guest turn as Lana on "Frasier."

In her free time she has been a tireless activist for finding a cure for Alzheimer's disease. Her father, Douglas, died of the illness, prompting Smart to take action. (Her mother, Kathleen, is still alive.)

This summer, Smart stars as Michelle, a prominent poker player, in the film "Lucky You," opposite Robert Duvall.

"I learned how to play Texas Hold 'Em — that's a new hobby of mine," said Smart. "I got paid for three weeks to sit at a table and play poker with Robert Duvall and Eric Bana — what could be better?"

Kurt Anthony Krug is a freelance writer and occasional contributor to The Seattle Times: kurt513@core.com

Jean Smart, left, and Karla Zamudio in "24." Smart says the show's producers "told me to play the first lady as a loose cannon. She's a little impulsive, but her heart's in the right place." ( JAIMIE TRUBLOOD / FOX)