Floyd ducked into a photo booth with her partner, Kathleen, a few years ago. She playfully flashed her cleavage to the automatic camera. (BETTY UDESEN / THE SEATTLE TIMES)
By Florangela Davila
Seattle Times staff reporter

When cancer struck the second time, Jackie Floyd looked to the future and envisioned her body in one of two ways: curvaceous with mastectomy scars; or reconstructed with breasts.

Truth be told, she had been proud of her breasts, flaunting them on the beach; flashing them inside one of those $1 photo booths. Once, years ago, as Floyd sprinted for a bus her halter top succumbed to gravity and out they flew. She laughs now at the memory. "They gave me great amusement."

When cancer struck the second time, this time with such vengeance it sent her into a rage, she chose to have her cancerous breast, along with the healthy one, removed. And while she had never had issues with her body — as a black woman in her mid-40s she had long learned that it would be she, not fashion magazines, who would define "beauty" — Floyd initially envisioned full-reconstructive surgery.

The idea of surgery hung on as Floyd packed up an RV and headed south from her home in Tukwila to Dash Point State Park. A week of saltwater vistas and moss-laden trails to help her catch her breath.

And that's when she saw it, out on one of her hikes: a huge evergreen that had been heaved from its roots.

"And I thought we could set this tree back on this stump. And it could be there. But that's kind of unnatural," she says.

"I thought about my breasts. I listened to my core and I asked: What do you want to see? That's what really brought me to the tattoo journey."

Talk to anyone who's faced-off cancer and hear myriad ways of claiming hope. Then it's your turn to watch surgical videos; to step into stores that sell prostheses. What would you do?

"I would think there are as many different ways to move through cancer as there are women," Floyd says.

She says this as she lies prostrate, just like that Dash Point evergreen that triggered her journey here. She's atop a table at Madame Lazonga's tattoo studio. The tattoo machine's buzzing. Floyd's arms cradle her head. Her feet, as they're prone to do when suspended, squirm.

When she saw that tree at Dash Point and how it had birthed new life as a log, she suddenly pictured another choice.

"I wanted to know that I had survived. I wanted to wake up in the morning and look in the mirror and know I had honored my journey."

She had no idea, though, if it was possible and if so, what it would look or even feel like since she had never been tattooed before. She visited a shop on Capitol Hill and paged through notebooks full of designs. When a young guy heard her say "mastectomy tattoo" he looked stunned. When a young woman heard the sincerity in her voice she gave Floyd the names of two female artists.

She met Vyvyn Lazonga in her Pike Place Market studio. Shoji screens and crystals; jazz music; a ceiling the color of curry. She believed.

She learned how a few other cancer warriors had also come to Lazonga for their own tattoos. To help paint a picture, she gathered up some items, telling tokens of her truths: a Nina Simone CD; a book about plants and, "Their Eyes Were Watching God"; photos of grandchildren Kobae and Jordyn; another of her with partner Kathleen.

She took a Polaroid of her breasts and tucked it away at home for later.

As she went in for her mastectomy surgery, asking the doctor for a pair of scars as symmetrical and flat as possible, she pictured herself here in the studio, Lazonga etching something vibrant on her chest.

"The loss and the renewal needed to be in the same space. I wanted an image of what I was going to do.

"With every life-threatening illness you think you've lost complete control. So how do you gain that control? This was the one that I found that was most nurturing for me."

At Lazonga's studio, she lay behind that shoji screen, underneath a blue paper blanket, for several hours at a time. Out came a monarch. "The sign of a healthy ecosystem." Cascading vines. Morning glories.

"It's a flower and a weed and it's hard as hell to get rid of," Floyd says.

It took some 15 hours to complete the image that waltzes from belly to shoulder, that's usually well-hidden to the world except when she's at home.

Where the pair of grandchildren know all about her journey.

And they ask: Grandma, can we see your flowers? 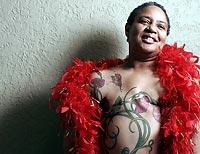 Jackie Floyd opted to have a custom tattoo instead of reconstructive surgery following her mastectomy. Friends know that she wears her boa when she is especially happy. (BETTY UDESEN / THE SEATTLE TIMES)

Three-year-old Jordyn traces the outline of one of grandma's morning glories. (BETTY UDESEN / THE SEATTLE TIMES)

"Oooh, that's me!" says Jackie Floyd as she looks at the progression of her tattoo. Artist Vyvyn Lazonga uses various types and sizes of needles to create different effects. 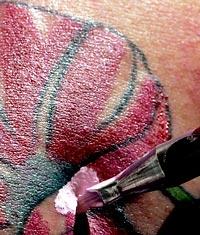