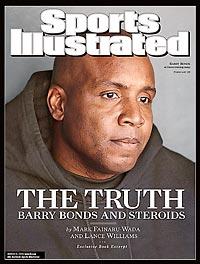 Let's start with the obvious: Barry Bonds is finished, capital "F," rhymes with diminished, which is how history will now regard him, to the ultimate extent.

His reputation is destroyed as definitively as any superstar in memory, his past irrevocably tarnished, his present turned into a living nightmare of recrimination, his future reduced to a series of equally distasteful choices.

Perhaps literally finished, in terms of his career. The newly released exposé by San Francisco Chronicle reporters Mark Fainaru-Wada and Lance Williams — the Woodward and Bernstein of the steroids scandal — is so thoroughly damning, and so scrupulously documented, that's it's hard to comprehend how Bonds could even proceed with the upcoming season, knowing the ridicule and scorn that lies ahead as he tracks Hank Aaron's career home-run record.

If Bonds thinks the world is against him now (and clearly he does), he hasn't seen anything yet. Not now that the dark, dirty secrets of his too-good-to-be-true late-career surge have been revealed in the new book by Fainaru-Wada and Williams, "Game of Shadows," excerpted this week in Sports Illustrated.

The excerpt is staggering in detailing the extent of Bonds' alleged steroid abuse, linking him not just to deca-durabolin and winstrol, two powerful steroids often used by bodybuilders, but also to the designer steroids known informally as "the cream" and "the clear," as well as insulin and human growth hormone.

The book depicts Bonds, after being introduced to steroids in 1998 by trainer Greg Anderson, asserting increasing control over his drug regimen. They write:

"He could feel the drop of energy that came when he was cycling off the performance enhancers and was mindful of the distance of his home runs; when his power started to decline he would tell Anderson to start him on another drug cycle, according to a source familiar with Bonds. Anderson kept the calendar that tracked his cycles. If he told Bonds he didn't need a cycle, Bonds would just tell him, "I'll do it myself."

The book is also staggering in the seemingly irrefutable evidence the authors have amassed to back up their allegations — more than a thousand pages of documents reviewed by the authors, including transcripts of grand jury testimony and an enormous catalog of material relating to the BALCO investigation; memos, secret recordings, taped phone messages, and more than 200 interviews. Just for starters.

This time, Bonds is not going to be able to explain it away by saying he thought he was using flaxseed oil, as he attempted to do, with epic disingenuousness, when confronted by the BALCO grand jury in December 2003. He can't huff, as he does with growing frequency, about everyone being out to get him. He can't victimize himself out of this one.

No, the term "dead to rights" comes to mind. As many suspected, but the fair-minded refrained from using against him barring stronger evidence, it's all proven fraudulent in this damning piece of investigative journalism. Diminished to the point of irrelevance: The spectacular seasons from 1998 to 2004 that, at an age virtually every other player began their decline, usurped the very best of Babe Ruth; the 73 home runs in 2001 that gave Bonds ownership of what might be the most coveted title in all of sports — single-season home-run record holder.

Even if Bonds continues, stubbornly, his march on Aaron's record — a possibility that has to make commissioner Bud Selig cringe — he's finished in every other arena.

Any remnants of support, even among the blindly faithful in San Francisco, is likely gone (though perhaps we shouldn't ever underestimate the ability of sports fans to rationalize their heroes' shortcomings).

Surely, whatever legitimacy Bonds was clinging to is destroyed for good. Quite likely, his Hall of Fame hopes are destroyed as well. Never mind the common refrain from voters that "he was a Hall of Fame player before he started using steroids."

This book documents such a massive program of cheating — beyond anything associated with Mark McGwire, who is known only to have used a substance, androstenedione, that was legally purchased over the counter in 1998 — that it is impossible to imagine casting a vote for him with a clear conscience.

Now Selig, it would seem, has no choice but to launch a long-overdue investigation into Bonds' activities of the last seven years. Surely, with Aaron's hallowed record looming within range of Bonds, he must act quickly and decisively.

It shouldn't be difficult for the commissioner to get started. All he has to do is read "Game of Shadows."