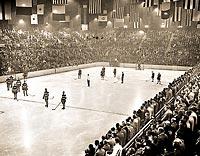 The Seattle Eskimos, a member of the Pacific Coast Hockey League, played in what was then known as the Arena in 1929. Other Seattle hockey teams also played at the arena. (THE SEATTLE TIMES, 1929)
By Bob Young
Seattle Times staff reporter

Elvis played there. Led Zeppelin and Britney Spears, too, along with hockey teams, chess champions and Hamlet.

For decades, Seattle Center's Mercer Arena served as an all-purpose venue, hosting hundreds of high-school graduations, the city's first professional women's basketball team, even Microsoft. In a good year, the equivalent of Seattle's population passed through its heavy metal doors.

But Mercer Arena, a 78-year-old workhorse, has sat dark and empty for almost three years, its future uncertain. It needs an estimated $20 million or more in seismic and safety repairs, making it unlikely that Seattle's once-popular rec room will ever return.

The arena is yet another question mark in the city's ongoing evaluation of aging Seattle Center. Along with the debate over a $220 million expansion of KeyArena, the city must decide what to do with Memorial Stadium, Center House and the Fun Forest.

Seattle Center staff has considered all kinds of uses for it: a cinema complex, health club, even tearing it down for parking or open space.

Only two options seem viable: The Seattle Opera wants it for office, storage and rehearsal space, while the world's largest concert promoter sees it as a great 5,000-seat venue.

Constructed in 1927, the building was part of a $1 million Civic Center. Saloon owner James Osborne helped underwrite the project. What started as an ice rink became the Arena, and an adjacent auditorium — dubbed "the House of Suds" because of Osborne's contribution — became the opera house.

The building became Seattle Center Arena in the 1960s. And when Seattle Center Coliseum was remodeled and christened as KeyArena in 1995, the old arena got another new name, Mercer Arena.

By the 1990s, the Arena at Fourth Avenue North and Mercer Street was used an average of 183 days a year. Financially, though, it didn't quite break even, costing about $140,000 a year to operate.

Faced with mounting maintenance issues at Seattle Center, City Hall had a choice to make in 1999. It could fix the worn-out Opera House, using a new property-tax levy, or rehab Mercer Arena. The City Council picked the Opera House, now known as McCaw Hall. Mercer Arena would become a temporary home for the opera and Pacific Northwest Ballet during renovation work.

The city spent $6 million upgrading the arena for use by the opera, but the work triggered the need to bring the building up to costly building codes, requiring a new foundation, roof and support columns, as well as plumbing and wiring upgrades.

Instead, Seattle Center dealt with the problem by negotiating with the fire and planning departments for a temporary permit for the opera and ballet.

Back when the city was debating its options, City Councilman Nick Licata had argued the levy should rehabilitate Mercer Arena instead of the Opera House. But Licata's idea wasn't supported by then-Mayor Paul Schell or the council.

"Their argument was that Mercer [Arena] wasn't critical, while upgrading the Opera House was," Licata said. It was clear to city leaders — though probably not to voters — that by agreeing to overhaul the Opera House they "managed the demise of Mercer Arena."

Bringing the arena back to life will take more than just money. It requires a tenant compatible with Seattle Center's other facilities.

Apparently, Live Nation, a giant in the world of concert promoters, may not fit the bill.

In 2003, city officials considered a partnership with Live Nation, then known as Clear Channel. Under one city proposal, taxpayers would put $6 million more into arena building upgrades, while Clear Channel would chip in $7 million. Naming rights would be sold. The city would issue bonds to cover millions more for the makeover and the debt. Concert revenue would be split with Clear Channel.

But Anderson said negotiations never got far. For starters, the financing model was similar to one used for KeyArena — which has proved to be a drain on the city's budget.

Clear Channel also sought a minimum of 80 concert nights a year. That would add too much neighborhood traffic on nights when concerts overlapped with opera or basketball, Anderson said.

The deal also would likely spark protests, according to city documents, from established theaters and entertainment venues, such as the Paramount and the Crocodile Cafe. "They will argue unfair publicly subsidized competition and that they will lose business at an already precarious time for them," a city report stated. Additionally, a revitalized Mercer Arena would compete for concerts with KeyArena.

The mayor's office still views the Clear Channel proposal as too commercial. "I don't think it's in keeping with the rest of the Seattle Center grounds," said Ceis, the deputy mayor.

Lee Smith, who runs Live Nation's Pacific Northwest operations, said his company remains keen on Mercer Arena. "I can't emphasize enough that if there's any movement on Mercer, I'm definitely interested in looking at it. We like that size. Mercer would be a great footprint for that."

Seattle Center staff has studied eight options for Mercer Arena and decided all but one were too costly or incompatible with the Center's personality.

The option recommended by Anderson calls for turning it over to the Seattle Opera, which performs next door. The opera's offices, rehearsal space and stage sets are now spread among buildings in the South Lake Union area and Renton.

"There's a tremendous savings if we're not trucking those things," said Speight Jenkins, the opera's general director. "It certainly is an ideal location for us."

Seattle Opera owns almost a full block of property on Mercer Street, across from McCaw Hall. It could develop that land for a new headquarters, but it would still need to move its sets and equipment across a busy street.

Under Anderson's proposal, the opera would finance required improvements to Mercer Arena, sign a long-term lease and give the city the land across from the opera hall.

The city would be free of the arena's redevelopment costs, it would help a key tenant and it would gain a valuable lot.

"The city would then have a property it could sell for commercial use such as a hotel," Anderson said.

Jenkins said the proposal is attractive. "The ball is really in the city's court."

A decision on the arena's future could come later this year, after a Seattle Center task force recommends what's best for the financial stability of the 74-acre campus and the City Council has its say.

Councilman Licata laments the possible loss of the arena as a gathering place accessible to working-class families and wonders if "we're seeing a trend of pricing out average folks from Seattle Center."

In response, Anderson, who is stepping down from her job overseeing the Center after 18 years, stresses the high cost of bringing Mercer Arena back to life as a public building.

"People like it because they saw one of their first rock shows or had their graduation there. But it's not going to be that building ever again. It's closed because it can't be that again."

Seattle Center employees Beau Fong and Mike Moon look over the seating at Mercer Arena, a city-owned venue at Seattle Center. Numerous seats have been removed and used in the Center House Theatre. (STEVE RINGMAN / THE SEATTLE TIMES)

Mercer Arena has sat dormant since the Seattle Opera used it as a temporary home three years ago. The Seattle Opera could take over the property again under a proposal recommended by Seattle Center Director Virginia Anderson. (STEVE RINGMAN / THE SEATTLE TIMES)