Every now and then, Oscar pulls off a surprise ending.

"Brokeback Mountain," Ang Lee's drama about two cowboys in love, appeared to have the momentum as the Academy Award ceremony approached the final award last night. Lee had just won for best director, speaking movingly about making a film "about the greatness of love itself," and "Brokeback" had also won for its screenplay and score.

Paul Haggis' film, a sprawling ensemble tale of racial tension in contemporary Los Angeles, was released to theaters back in May — an eternity, by usual Oscar standards. But the film's distributor, Lionsgate, campaigned aggressively for the award, sending out more than 130,000 screener copies of the film and creating that all-important Oscar buzz.

It's not too unusual to have a best picture/best director split — it happened three years ago, when "Chicago" won best picture over Roman Polanski's "The Pianist," and six years ago, with "Gladiator" taking the top award over Steven Soderbergh's "Traffic." But "Brokeback," winner of numerous pre-Oscar awards, looked unstoppable this year, and the "Crash" crew seemed genuinely shocked at their win.

Producer Cathy Schulman praised the other nominees, all small-scale films with serious subjects. "You have made this year one of the most breathtaking and stunning maverick years in American cinema," she said at the podium.

Appropriately, this was a year in which awards were spread out, with "Crash" and "Brokeback Mountain" winning three each. ("Crash" also won for original screenplay and editing.) And each acting award came from a different film, each representing that film's solo win.

The expected favorites won best actor and actress, both for playing real people. Philip Seymour Hoffman, winning for his portrayal of writer Truman Capote in "Capote," used the award envelope to shade his eyes as he peered into the bright auditorium, looking for his mother, whom he singled out for thanks. Reese Witherspoon, who played singer June Carter in "Walk the Line," also acknowledged her parents, and gracefully noted a signature phrase of her character's: "I'm just trying to matter."

George Clooney, winning for best supporting actor for "Syriana," wisecracked upon arriving on the stage, "All right, so I'm not winning director." (He was nominated in that category, for "Good Night, and Good Luck.") In his brief speech, he praised his fellow nominees and noted Hollywood's progressive tradition. "I'm proud to be part of this community," he said.

Best supporting actress went to Rachel Weisz, for "The Constant Gardener." Morgan Freeman, presenting the award, grinned broadly — the two worked together back in 1996, in the thriller "Chain Reaction." Weisz also acknowledged the political content of her film, set in a troubled region of Kenya. The filmmakers, she said, "really paid tribute to the people who are willing to risk their own lives to fight injustice. And they're greater men and women than I."

A design team with Northwest roots, previously winners for "Chicago," won again this year for "Memoirs of a Geisha." John Myhre, a Seattle native and graduate of Nathan Hale High School, won for best art direction (with Gretchen Rau); Colleen Atwood, of Eastern Washington, was the winner for costume design. "Geisha" also scored the cinematography award for Dion Beebe, who was also a member of the "Chicago" team.

A few winners lightened the proceedings by bringing props to the podium. Nick Park and Steve Box accepted their award for best animated feature for "Wallace & Gromit: The Curse of the Were-Rabbit" wearing whimsically striped bow ties with their tuxedos — and whipped out tiny matching ties for their Oscars. The filmmakers of "March of the Penguins," winning for best documentary feature, carried stuffed penguins throughout the evening. "Looking out on these tuxedos tonight, it's like seeing the movie again," noted producer Yves Darondeau.

Jon Stewart, hosting for the first time, seemed at ease and landed a few effective one-liners. "Good Night, and Good Luck," he said, wasn't just the title of an Oscar-nominated film but was "the way George Clooney ends all his dates." After a montage of issue movies, he intoned in basso tones, "And none of these issues were ever a problem again." He mostly avoided political humor, though he did note that Björk, she of the famous swan dress, wasn't present this year because "she was trying on her Oscar dress, and Dick Cheney shot her."

Among the year's innovations was the first hip-hop song to be performed at the Oscars. Three 6 Mafia delightedly claimed the best song award for "It's Hard Out Here for a Pimp" from "Hustle & Flow" (which, truth be told, wasn't quite as catchy when accompanied by Bill Conti's orchestra and accessorized by a troupe of semi-interpretive dancers).

Also new was the practice of playing music throughout the acceptance speeches, which seemed a tad rude. If the Academy wants to honor these people, it should have the grace to keep quiet for a few seconds so they can thank their mothers (which seemingly every winner did).

A few presenters stood out, most notably Ben Stiller in a green unitard (you had to be there), Steve Carell in Goth makeup (ditto), and Jennifer Garner, who fetchingly tripped over her skirt on the way to the podium, then ad-libbed quickly, "I do my own stunts."

And Lily Tomlin and Meryl Streep, presenting an honorary award to director Robert Altman, created a two-woman performance art piece, their dialogue tripping and weaving and overlapping in delightful homage to Altman's signature style. Somebody give these women a podium next year. 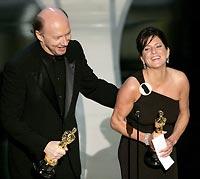 "Crash" producers Paul Haggis and Cathy Schulman seemed as shocked as everyone else when they won the best film Oscar. (MARK J. TERRILL / AP) 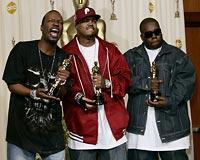 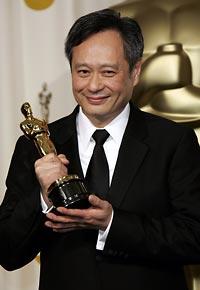