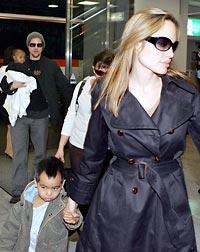 Who cares about "Brangelina," the reportedly salacious relationship of Brad Pitt and Angelina Jolie? And who needs to know about Lindsay Lohan's weight fluctuations or Michael Jackson's facial transformations?

"I think almost everyone dreams of having fabulous lives with millions of dollars," said Jen Prall, 24, of York, Pa., who subscribes to People magazine and frequents celebrity-themed blogs. "So it's a way of living vicariously through them."

"Celebrity gossip has become like the blob in that [1958] Steve McQueen movie: It spreads everywhere it can," said Matthew Felling, media director of the Washington-based Center for Media and Public Affairs, a research group. " 'Entertainment Tonight' begat 'Access Hollywood.' TV people saw these two shows could succeed and created an entire channel for it," E! Entertainment Television.

Hall's Reports of Stamford, Conn., which tracks magazine content, counts more pages devoted in recent years to entertainment and celebrity news, in titles as various as Us Weekly and National Geographic.

Survival of the informed

"For most of our history, humans lived in relatively small groups," McAndrew said. Those who used their social skills to gather information — whether to recruit allies or attract a mate — succeeded in the community. Often, uncovering secrets proved useful.

"We're kind of programmed to want dirt on other people," McAndrew said. "We can use it to our advantage," even if it's to assure ourselves about how well-adjusted our lives are by comparison.

Meanwhile, psychologists say, learning so much about the famous can lead to a genuine concern for them and may feed a desire to know more.

Grace Dawson, 23, of Stanchfield, Minn., takes an interest in the divorce proceedings of singers Jessica Simpson and Nick Lachey, who allowed cameras in their California home for their MTV reality show, "Newlyweds: Nick & Jessica."

"We feel like this is our relationship too, because we saw so much of it," Dawson said.

Who reads this stuff?

Lynn McCutcheon, co-author of "Celebrity Worshippers: Inside the Minds of Stargazers" and assistant professor of psychology at DeVry University in Orlando, Fla., has examined fans of the famous. Various studies, he says, have found that people who score high for star worship tend not to be as smart as those who score lower.

"A lot of them — well, I'll use a phrase my younger daughter used when talking about this," he said. " 'Dad, a lot of those people need to get a life.' That's a bit of an overgeneralization, but true."

But even those who don't care are bombarded.

"The tabloids line the grocery-store checkout aisles; most news outlets [broadcast] entertainment news ... and even Internet pop-ups and ads often reference celebrity gossip," said John McGrath, 28, of Boston. "It's pretty much impossible to get away."