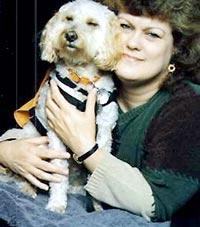 Jodi Anicello and Chewie were together for 10 years. (COURTESY OF JODI ANICELLO)
By Jerry Large
Seattle Times staff columnist

When Jodi Anicello's dog died last December, she lost not only a friend, but part of her ability to interact with the world. Her dog, Chewie, did the work that Anicello's ears can't.

Anicello was born deaf. With hearing aids, she can make out a door slamming or a person yelling, but not the sounds that make up everyday life for most of us. Chewie would tell her when the microwave dinged, or the doorbell rang. He'd tell her the dryer finished its cycle and jump on her to let her know the alarm clock was going off.

For more than 10 years, he broadened her access to the world. She can't replace him as a friend, but she is anxious for a new helper.

Life didn't get easier after Chewie died. Two weeks ago, Anicello's mother died. She and Anicello's father have been divorced for many years, but they lived together recently so they could help each other deal with growing physical problems.

Anicello lives in Bothell but has been spending much of her time in Burien caring for her 83-year-old father, who is now blind. Dealing with all of this is harder without a hearing dog.

Anicello came up with a plan — a fundraiser, so the organization that trained Chewie could get her a new companion more quickly.

She wrote me saying there were a dozen people on the list ahead of her, and if she could raise money to get dogs for them, she'd be next in line.

But it doesn't work quite that way.

Chewie came from Dogs For the Deaf, an Oregon organization that trains dogs for people who need them. They are already finding and training dogs as fast as they can.

Beth Hay, client services coordinator for DFD, told me that finding suitable dogs is a challenge. They have to be careful about the dogs they pick.

DFD finds dogs in shelters and humane societies in Oregon and Northern California. That has the added benefit of giving dogs a new life.

They look for energetic, confident dogs who are motivated by toys and treats because they will be trained by positive reinforcement. They have to be the right age and not too big or too small.

Even then, she said, "Only about 30 percent of dogs brought back here complete the training successfully."

It takes four to six months to train a dog, and people who qualify to receive one typically wait a year, sometimes less.

A fundraiser wouldn't speed up the process, but it is true that donations pay for the training. Clients pay only a $25 application fee, and if they get a dog, another $100 that is refunded if they complete the first year successfully.

Hay also said people who've had dogs before, like Anicello, are a priority because they're grieving their loss and because they've become reliant on a dog. The main thing, though, is matching the right dog to a person.

Chewie, a cocker spaniel/poodle mix, was definitely the right dog for Anicello. He not only alerted her to sounds, but introduced her to new people who were attracted to him.

He was a social animal and would get excited whenever she took his orange vest off its hook, because he knew they were going out. He especially liked going with her to Leilani Lanes, the Greenwood Avenue bowling alley where she has worked for the past three years doing a variety of tasks.

When Chewie got too tired to walk, she'd lay him on her coat on the cart she pushed around when she was restocking the vending machines. He'd lift his head to point toward the source of sounds Anicello should be aware of.

Sunday afternoon, she is staging a memorial service for Chewie at Leilani Lanes because it was one of his favorite places, and she still plans to ask for donations to Dogs For the Deaf at the event.

"Chewy completed me," she said.

You can e-mail Anicello to find out about her event: jodidog@tmail.com.

His column runs Thursdays and Sundays and is found at www.seattletimes.com/jerrylarge.