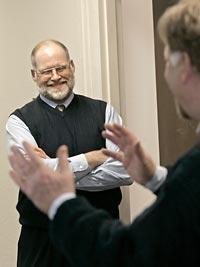 Latesha Gonzalez, 23, works about 60 hours a week and every month writes a check for her student loans — but she's paying for an education she says was a waste of time.

She dropped out of Crown College in Tacoma after learning that her credits there aren't accepted at traditional colleges and universities. She says admissions agents at the for-profit, private school lied to her when she enrolled and told her it would be "no problem" to transfer to Gonzaga University, where she wanted to study criminal psychology.

Crown College administrators deny they mislead prospective students, but a Pierce County Superior Court jury found that the college violated the Consumer Protection Act by failing to tell Gonzalez that her credits wouldn't transfer. As a result of her lawsuit, the jury awarded her $2,000 last month, and a judge has the discretion to increase that amount at a hearing today. Meanwhile, another six students have filed a separate lawsuit against Crown, also claiming they were fooled into believing their credits would transfer to traditional, academic colleges. The Crown students aren't alone; other schools in this state and around the country have been sued over credit transfers.

The cases highlight the problems students face in distinguishing among an increasing variety of colleges and courses, and the problems educators face in drawing a line between vocational and academic study.

The cases also bring to light something else: Crown enjoys the same exemption from rigorous state oversight as large public schools because Crown is based in Washington and has been in business for more than 15 years.

While most public and private colleges are not-for-profit, there are an increasing number of for-profit institutions like Crown, the University of Phoenix and DeVry University, many of which advertise heavily in broadcast and print media. About 9 percent of college students in the United States now attend one, according to Eduventures, a market-research company. The schools offer convenient, job-specific training and are often cheaper and easier to get into.

Wabel is not the only one with concerns. Many members of Congress say that schools should provide a rationale for why they accept or decline credits from other schools. But many universities oppose the idea, arguing that it could compromise their academic autonomy.

But students who enroll in colleges like Crown and expect to transfer can run into problems. Some of the difficulties reflect the fragmented system of college oversight.

Most traditional, public and private colleges and universities are accredited by a regional body, often considered the gold standard (here, it's the Northwest Commission on Colleges and Universities). But Crown is accredited with the national Accrediting Commission of Career Schools and Colleges of Technology, which typically awards credentials to vocational schools.

That works fine for students wanting a job-specific qualification, sometimes called a "terminal" degree because it can't be used toward anything else. But those students wanting to parlay their study into a higher degree can find other institutions unwilling to recognize their work.

George Mills, vice president for enrollment at the University of Puget Sound, likened transfers of college credits to an international currency exchange. The schools depend on independent accreditors to determine the value of credits. Regionally accredited community-college credits transfer easily to regionally accredited colleges like UPS, Mills said.

"Given that Crown is not regionally accredited, we would not take the work in transfer," he said.

University of Washington Director of Admissions Philip Ballinger said the UW doesn't take them either, as a general rule, though he and Mills say students could petition to have class credits accepted individually.

Wabel said no school can guarantee that every credit will transfer and that it's the students' responsibility to check into that before they enroll at any school. His message of "student beware" is echoed by everyone from the UW to the state's Higher Education Coordinating Board (HEC).

But the legal and compliance action against Crown comes after years of student complaints to the HEC Board were turned away.

The board, which oversees 52 institutions, told Crown students it has no jurisdiction. That's because a grandfather clause exempts many colleges from stricter watchdog laws that came into effect in the early- to mid-1990s.

Mike Ball, an associate director with the board, said many well-established schools like the UW are exempt but that Crown is perhaps the only small school of its kind with such an exemption.

Those schools overseen by the HEC Board must show they have qualified administrators and faculty, adequate financial resources, good policies and procedures and even a support program for students, Ball said.

He said the state Legislature is considering some changes to the rules. Until then, Crown students who are dissatisfied have the option of complaining to the state Attorney General's Office or taking independent legal action.

He said Crown's exemption will remain in effect as long as the college retains its national accreditation.

But that is now under question. In September, Crown was placed on probation by the accrediting commission.

Commission Executive Director Elise Scanlon said there are "compliance concerns" but that her agency doesn't routinely discuss the details of probation.

The college comes up for a review in May, she said, when the commission will either remove the probation notice or take further action.

In the two Crown lawsuits, the plaintiffs' lawyers say Crown admissions agents lied so prospective students would enroll and boost the school's revenue — a conflict of interest, the lawyers said, that's inherent at for-profit schools.

"I know that they're deceiving students about whether their credits will transfer," said David Elder, a former instructor at Crown who testified in the Gonzalez trial. "Getting the students' money was more important than getting the education."

Every student who enrolls at Crown must sign a statement that says he or she understands that the credits might not transfer, except to City University or University of Phoenix — regionally accredited schools with whom Crown has an agreement.

Gonzalez initialed the statement, but said she took the word of a Crown admissions agent who said most of her credits would transfer and that other Crown students had gone on to Gonzaga.

"Who's going to think that somebody who's supposed to help you get further in life is going to lie to you?" Gonzalez said.

She owes about $3,800 in student loans. She lives in Federal Way and works as a caregiver at an adult family home so she can afford to enroll in a community college this spring.

"I'm not going to let this discourage me, but I'm upset," Gonzalez said.

Gonzalez's victory is encouraging to the six plaintiffs in the second lawsuit.

One of them, Joanne Black of Everett, enrolled at Crown in a paralegal course after she lost her job as an airplane-hardware inspector for a Boeing supplier.

She was a top student at Crown, but no one would hire her when she started applying for jobs, she said. She met students from other paralegal programs, but they were discussing things she'd never heard of.

Finally, she said, a hiring manager pulled her aside and told her, "I'm sorry, you just do not have the knowledge you need to be a paralegal."

So she ended up retaking her paralegal training at Edmonds Community College.

"We are not wrong"

In his deposition in the Gonzalez case, Wabel said he bought Crown School of Hair Design in 1990 in Everett as a "good business venture." He had a background in sales and had worked as an admissions officer in a vocational college. He turned Crown into a training school for correctional officers.

A year later, Wabel moved the school to Tacoma and gradually added to the curriculum.

Most of the students log in from home and take classes in a video-gamelike virtual reality called the "cloudroom."

It's hard to keep Wabel in his seat when he starts talking about the lawsuits. He is furious and believes that a few disgruntled students are trying to extort the college. He says Gonzalez lied about what the admissions officer told her.

"It did not happen," Wabel said. "We are not wrong, and it sets a precedent for the entire industry. Anybody can make up a story, but what is in writing?"

He's proud of his college and says it provides an opportunity for low-income students who want to be able to compete in the marketplace but need the flexibility of online learning. Wabel said 70 percent of his 250 students are women with at least one child.

"We are just a private little college doing the best darn job we humanly can," he said.

Another six students have filed a lawsuit against Crown College in Tacoma over credit transfers.

Enrollment: Of about 250 total students, 70 to 80 percent take classes online.

Accreditation: Crown College is on probation from the national Accrediting Commission of Career Schools and Colleges of Technology (ACCSCT), which accredits postsecondary career schools. Most traditional colleges and universities are regionally accredited by one of six regional accrediting bodies. The Northwest Commission on Colleges and Universities, based in Redmond, covers Washington, Oregon, Idaho, Alaska, Montana, Nevada and Utah.