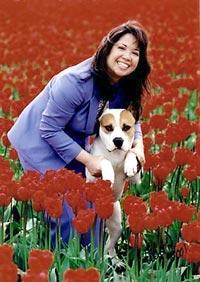 In early January, Sarah Smith went walking in her leafy North Seattle neighborhood. Not far from her house, she saw two of her neighbor's pit bulls running loose. Before she could do anything the dogs rushed her, attacking her small terrier.

"I was screaming. I was out of my mind," says Smith, who asked that her real name not be used for fear of retaliation by the dogs' owner. "I was tangled in my leash, and I closed my eyes because I didn't want to see my dog ripped up."

The dog's owner and neighbors helped break up the attack. It wasn't until Smith got home that she discovered bloody puncture wounds in her own arm.

While she and her dog are on the mend physically, Smith is still emotionally shaky.

"I am afraid of pit bulls now," she says, "but I see this as an owner problem."

Still, anything involving pit bulls has a way of taking on a political life of its own, fueled by news accounts of attacks and public disagreement that spills into town halls and Internet forums.

In the debate over banning, the questions persist: Are these dogs vicious by nature or victims of irresponsible owners and breeders? Or is their strained place among us, as some have argued, a combination of genetics and circumstance?

The recent history of the pit bulls has been tough. After decades as an all-American favorite (from Stubby the World War I hero to Pete in "Our Gang"), the pit bull was embraced for its more pugnacious qualities.

It happens all the time: A strong dog becomes widely popular for its ability to intimidate. In the past several decades, Dobermans, Akitas, Rottweilers, German shepherds and even shaggy St. Bernards developed short-term reputations as a public menace.

Unfortunately, unlike fads of the past, the pit-bull craze has endured for nearly three decades, putting enormous stress on the various breeds that are called pit bulls and keeping them constantly in the headlines.Adding to the cost of popularity is the pit bulls' tendency to attract owners drawn not by its historic family-dog role but by its reputation as the premier fighting dog.

"It's the dog of choice for drug dealers and young males 12 to 23," says Don Jordan, executive director of the Seattle Animal Shelter.

At best, these owners are too young to take responsibility for such a demanding breed. At worst, they campaign them in dog fights and abandon losers. They often leave their dogs tethered in the backyard, neglect and abuse them and fail to socialize them — all of which can contribute to aggressiveness.

While American pit bulls have historically done well in temperament testing (see table), current circumstances may be taking a toll.

"When we first got pit bulls in, they were always friendly. They were always nice dogs," says Diane Jessup, a former animal-control officer in Olympia. Jessup has raised many pit bulls and written several books about them. "I will say now, in the last five years, 50 percent of the dogs are fearful, fear-biters with horribly unsound temperaments."

The number of pit bulls coming into Seattle Animal Shelter continues to increase — from 362 in 2001 to 559 in 2004. Given their reputations, these dogs are difficult to place. More than 1,000 were euthanized during this same period.

Sampson was among many dogs used as a stud in a home-breeding operation in Bremerton. When his owners were arrested on drug charges, it was a month before animal control learned that 20 pit bulls had been abandoned on the property. By the time officials arrived, 10 dogs were dead and five were so sick they had to be euthanized. Sampson was among the five who survived on trash in the house.

The experience did not ruin Sampson. "He's really mild-mannered and kind of a coward," says Chapman. "He breaks up cat fights. He's kind of like a peacekeeper."

That gentleness, as well as a certain goofy charm, are overlooked aspects of the pit-bull personality, say owners, and among the traits that endear them to these breeds.

Elvie Arnobit, a sales representative from Redmond, didn't know much about pit bulls' darker reputation when she fell in love with an American pit-bull puppy named Marauder-Ivie League's Harvard — Harvey, for short.

With soulful eyes and a sweet disposition, she says, "I had to have him."

At 70 pounds, a white-and-red fawn coat and a giant dog tag that proclaims "Lick Monster," Harvey perches human-style on a chair next to Arnobit as she scrolls through a slideshow: Harvey dressed as a king, as a poodle and in a tuxedo with a cigar in his mouth. As she describes his silliness, Harvey offers her his leash — repeatedly.

Under Arnobit's constant care, Harvey became a United Kennel Club confirmation champion, with an agility title, therapy-dog certification, an obedience title and his own Web site, kingharvey.com. He high-fives for treats, punches the automatic door openers at handicapped entrances and he's a favorite at Paws-Abilities, a dog-training facility in Tukwila.

Still, a docile dog is not the breed ideal. According to the United Kennel Club, which registers American pit-bull terriers, the dog should embody the virtues of a warrior: "strength, indomitable courage and gentleness with loved ones."

Pit bulls descend from bulldog-terrier mixes that were first bred in Elizabethan England. They were known as the Butcher's Dog because they controlled cattle by biting and holding the nose of wayward cows heading for the market.

This evolved into a sport where bulls were tormented by the dogs in contests of strength. When "bull-baiting" was outlawed in the early 1800s, these contests were moved to clandestine pits between dogs. Today, fighting is illegal in all 50 states, but is still widespread.

"It's not sensible to get an animal bred for bringing a 2,000-pound bull to its knees and say I'm going to treat this like a soft-mouth Labrador," says Jessup, the former animal-control officer. She blames novice owners, as much as actual criminals, for bringing the breed into disrepute. "It's a capable animal, and it's got to be treated as such."

For some, the issues of owner responsibility and the dog's stellar qualities don't complete the picture.

Kory Nelson avoids the debate over whether pit bulls are more aggressive than other dogs. As an assistant city attorney for Denver, Nelson has successfully defended repeated challenges to the city's 16-year-old pit-bull ban, one of the oldest big-city bans in the country.

He concedes that there is no definitive proof that pit bulls bite or attack more often than other dogs or even that they are fundamentally more aggressive.

Statistics about fatal bite attacks, though widely reported in stories about pit bulls, are generally considered unreliable or incomplete.

Instead, Nelson has successfully argued that pit-bull attacks are more severe and more likely to be fatal than other dog attacks because pit bulls bite into deep muscles, and hold and shake, ripping tissue. The dogs are also less likely to retreat in a fight and can strike without warning.

Nelson uses this analogy: Other breeds are to firecrackers as pit bulls are to hand grenades.

"They may have the same equal chances of going off accidentally," he says. "But we can agree that a hand grenade would cause more damage should that event take place."

Some Washington communities agree. Buckley (Pierce County), Enumclaw and Yakima have banned pit bulls. At least eight other Washington jurisdictions have pit-bull-specific restrictions including a special registration, spaying or neutering, muzzles in public, and sometimes owners are required to post a bond.

In this environment, responsible pit-bull owners find themselves in the hot seat. One owner with children said she'd been called an unfit mother for having the dogs. Others are used to seeing pedestrians cross the street to avoid them.

"As an owner you realize you can never make a mistake. Regardless of the situation, it's always going to be your dog's fault," says Jamie Samans, a spokesman for the Pit Bull Project.

When it comes to pit bulls, he says, "there is no room for error."

Lisa Wogan is a Seattle-based freelance writer: vietato@msn.com. Got a comment? Write to talktous@seattletimes.com.