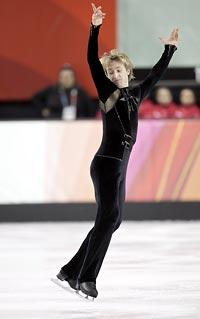 TURIN, Italy — The Olympic men's figure skating started at 7:05 p.m. at the Palevela. It pretty much ended less than three minutes later.

That's when Evgeni Plushenko thrust his arms in the air, putting a punctuation mark on another bit of poetic near-perfection.

The only thing wrong with the 23-year-old Russian's short program was that it was so short.

He never looks tired. He never looks frazzled. Aside from a dubious haircut that looks like it belongs in a '72 Camaro, he never looks much less than perfect. You could call him a machine, but nothing inanimate ever moved with the grace and power of the three-time world and five-time European champion.

His spectacular opening, a quad toe loop/triple toe loop combo, wasn't quite up to snuff, he said later: "I had to fight for this quad to the very end."

But everything that came after it was.

His triple axel, befitting the Olympics, is swifter, higher and stronger than that of any other man alive. His circular step sequence, rather than serving as the typical, lollygag-and-catch-your-breath part of a program, is an all-out attack on physics. It is as if gravity offends him.

It's breathtaking. And the judges are fond of it, too.

Plushenko's short-program tally of 90.66 gave him a safe lead over the nearest pretender, America's Johnny Weir, an affable guy in a swan suit and one red glove who scored 80.00 points in a program he said was nowhere near his best work.

"If he falls three times, maybe, maybe somebody sneaks by him by a point or so," the ever-quotable 21-year-old U.S. champion said. "I know how difficult it will be to beat Plushenko."

Nobody expects it. Which is a good thing, because the Russian left no doubt Tuesday that his nation's long grip on the men's figure skating world isn't about to slip.

The 1988 Calgary Games were the last time anyone other than a Russian got close to the men's figure-skating gold. When Brian Boitano did it that year, just one Olympics after Scott Hamilton's gold in Sarajevo, could anyone guess it'd be 18 years, and counting, of Russian dominance?

And no other word describes it. It's difficult to describe in words what it means to be a full level above the field in athletic competition. But even the skating layman knows it when he sees it.

Plushenko, for his part, acts the part of dominator just as well off the ice as on it.

While America's champion, Weir, is effusive with the media, rightfully soaking up his moment in the sun during his first Olympics, Plushenko seems to be walking around in his own alternate universe, skating programs in his head no one else can even draw on paper.

He's Mozart in black tights. You can picture him tossing a proposed routine back at his choreographer and sneering in Russian: "Too many notes!"

After his program, he walked through the media mixed zone, stopped in front of a TV camera and took a single question. One. Then he not only skipped right past hundreds of reporters waiting to jot down any stray utterance, but literally turned his back on them as he went by.

It's tough to blame him. What is there to say? Plushenko's talking is done on the ice, and when he skates, everyone else on the skating roster stops to watch the master.

Having finished second to countryman Alexei Yagudin in Salt Lake City, Plushenko has won everything on ice except an Olympic gold medal. While his competitors flit around the rink, hoping to catch the judges' eyes by flaunting gimmicky music, plumage and other frills, Plushenko skates in black, to Puccini's "Tosca," with the steely gaze of an assassin.

There's no doubt a troublesome hamstring requiring surgery after the 2005 world championships is healed, and that the world title he relinquished in the process was simply on loan to Switzerland's Stephane Lambiel, who stood third after the short program here.

Plushenko's free skate on Thursday — he skates first in a final group containing Weir and Lambiel — is likely to be one of the signature moments of the Olympics. Not just this one — any one, if it's on the same level as his short program.

Set the Tivos. Cancel that flight. Summon the children.

Evgeni Plushenko is that good. He's that on. And that special.