The Bucks spend quiet time talking or just holding hands. Others at the nursing home call them "the lovebirds."
By Sonia Krishnan
Seattle Times Eastside bureau

Twice a day, Carl Buck lumbers with a walker from his apartment to an Issaquah nursing home across the street. Age has taken most of his eyesight. He strains to listen for passing cars.

He makes the trip every day to see the woman he loves. And every day, she waits to feel his palm around her hand.

Carl, 84, and Joan Buck, 74, have been married for 21 years, but disease forced them to live apart beginning four years ago. Joan's multiple sclerosis had progressed to the point where Carl could no longer care for her.

So each morning he arrives at Providence Marianwood and greets his wife with a kiss. "You're so beautiful," he says. She wears a pink sweater and pearls. Her blue eyes twinkle.

They hold hands as Carl whispers stories to her or takes her outside for fresh air. He goes home for lunch and a nap, then, steady as a heartbeat, returns in the afternoon to spend the rest of the day with her.

"When you love someone and marry them, you marry them for life," Carl says. "It isn't hard to be patient. That's how it's supposed to be."

Supposed to be, but rarely is.

Carl knows this. He devoted most of his young life to his job, often working long hours as an up-and-coming engineer at Boeing. Then his first wife died when he was 39. The regret, he said, haunted him for 25 years.

If God gave him one more shot at love, he would know what to do. He would seize it forever.

Carl was 63. He had been thinking a lot about Joan Braseth, a neighbor who used to live two doors down from him in West Seattle. He remembered the pretty blond woman and mother of 10 who always carried a baby on her hip. He'd heard that her husband had died, so, on a whim, he dialed her number.

She invited him over for dinner that day and they were married six months later in July. The bride wore a blue dress. Three of Joan's sons lifted her wheelchair up to the altar.

Carl understood that her health was deteriorating.

"I knew it would be difficult," he says. "But I just plain wanted her."

He retired to take care of her full time. For 16 years, they lived together in West Seattle and spent their days listening to opera, watching old movies, going to church, visiting with some of their combined 14 children and talking about politics, families, old friends. He grew to admire her strength, he said, and her refusal to let the disease infest her spirit.

Around the nursing home, the couple are known as "the lovebirds." The two hold hands like teenagers and stare into each other's eyes. He leans in to tell her a joke and she smiles. Whenever Carl says 'I love you,' Joan pulls out a little stone. Inscribed are the words 'I love you more.'

"If only my husband were like that," one nursing staffer said as she passed the couple in the hall.

Others marvel at their bond. "It's not pleasant, what Joan's going through with MS," said Carol Gardener, a recreational therapist at Marianwood. "But she feels like she got a prize. And so does he."

Joan cannot walk anymore, and her speech comes through labored breaths. Her memory can fade, then return with ferocious clarity. She remembers being a young mother, and every time she went home after delivering a baby at the hospital, the nurses would say, "See you next year!"

"Oh, she's just so remarkable," Carl says, as he feeds her lunch, gently wiping away stray bits from her mouth.

When the meal finishes, he wheels her into the lounge. He used to read to her, but macular degeneration took his vision, leaving him to see only out of the corners of his eyes. The time drifts by as they sit, arms touching, fingers intertwined. A cool breeze floats through an open window.

After she falls asleep, he will leave with his red-and-black walker, and eat his meal alone. Later, he will come back, then return home again at dinnertime. When he reaches his apartment, he will call Joan's answering machine. "Honey, I love you and I'll see you tomorrow," he'll say. The message is always the same.

But that time hasn't come yet. For now, he nestles his head on her pillow. And softly, ever so softly, he begins to sing, a song that only she can hear.

Carl Buck secures a blanket around his wife, Joan, as they enjoy some fresh air outside the Issaquah nursing home where she moved when her multiple sclerosis progressed beyond Carl's ability to care for her. He visits twice daily, walking from his nearby apartment. (ELLEN M. BANNER / THE SEATTLE TIMES) 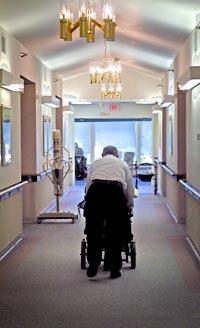 Carl Buck pushes Joan's wheelchair toward the sunroom at Providence Marianwood. His devotion has remained strong as his wife's health has declined. "Oh, she's just so remarkable," he says. (ELLEN M. BANNER / THE SEATTLE TIMES)