The "Noiseguy" pauses, just for a moment, before he begins. The audience is waiting.

He better be funny.

Storytelling — at least the way Charlie Williams does it — looks a lot like stand-up comedy. He's got only a few seconds to read the crowd and gauge what it'll respond to.

Children can be tough. They won't hide their feelings or clap politely if he bores them. And boredom would be death.

Williams, 38, earns a living getting children fired up about stories. He bases his trade on the funny-sounding literary device called onomatopoeia — the use of words whose sounds reinforce their meaning, such as "boom!" Or "splash!"

During a performance, he'll contort his lips, twist his tongue and gyrate his vocal chords to illustrate the sounds in tales such as "Jack and the Beanstalk."

"What should we use to chop down the beanstalk?" he'll ask the children. "A saw!" they say.

Williams tackles taboo subjects such as bathroom noises with humor, aplomb and tact. His new picture book, called "Flush: An Ode to Toilets," is about a little boy who encounters the strange world of flushes — from high-tank toilets that go "Ker-sluggle sloosh!" to high-tech commodes that say "SQUIRSH! Thank you."

Williams' modest appearance belies the crackling energy he imports to an audience. He dresses in a simple bowling shirt and slacks. He keeps his curly hair short and sports sneakers on his feet.

But in front of the young students and their parents at East Ridge Elementary School in Woodinville last week, he bubbles with animation. He pulls out his microphone with a flourish. Holds it to his mouth. And out tumbles the story of the Lewis and Clark expedition.

As the overhead lights dim, simple cartoon drawings, sketched by Williams, are projected on-screen. His voice alternates rhythm, cadence and tone. He sprinkles the expedition story with comedic anachronisms. At one point, Lewis and Clark use their cellphones and lock their river boat with a keyless-entry remote.

The children laugh and soak up the words and sounds like thirsty sponges, hardly aware he's actually teaching them something.

To Williams, that's precisely the point.

"We're so test-obsessed," he says later. "Everything has to have 'educational content.' But there are some books and stories that are just fun. Fun is educational."

He performs at libraries throughout King County and around the country. Next month he'll entertain kids at the Whirligig festival at Seattle Center.

Williams chuckles when he thinks about the turn his life has taken.

"It's so funny I'm doing all these things for libraries because I can't tell you how many times I got kicked out of them when I was young," he says.

He used to be the shy kid in school, the one who used to sit in the back of the class and chirp bird calls to get a rise out of his teacher and a laugh from the students.

Sound soon became his medium. He learned to masterfully imitate the pitches and tenor of everyday life, such as rainfall, vacuum cleaners and whistling wind.

The noises helped him out of his shell, he said.

After high school, he tried the comedy-club circuit, where he met his future wife, Melody, but he grew weary of the demanding lifestyle. They moved to Wyoming in the early 1990s, and Williams got a job in a library.

He was the typical story-time teller in the beginning, he said, sitting and reading straight from the book.

But he became unnerved by the children's listless movements and the adults chatting in the background.

"I thought, 'I gotta make this more interesting.' "

So he threw in some noises. Added some jokes and modern touches. The mixture worked.

He quit his librarian job eight years ago, moved to Issaquah, and created the Noiseguy persona to be the kind of story-time reader kids dream about.

Now, when he ends a reading, he sends the children off with some words of advice.

"Use sounds in your stories," he says. "And be noisy!" 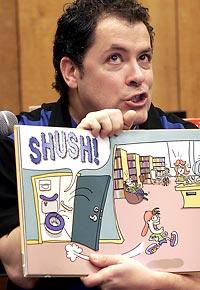 "Noiseguy" Charlie Williams makes the final toilet-flushing sound effect as he concludes the reading of his book, "Flush: An Ode to Toilets." (TOM REESE / THE SEATTLE TIMES)