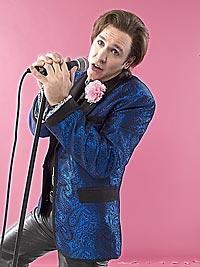 A naive New Jersey musician hopes to win the girl he loves by cashing in on the 1980s insider-trading action. On Wall Street, a mini-mob of yuppie traders in shark-gray suits greet him like a cult possessed. "Wanta be somebody?" they sing to the new acolyte. "It's all about the green!"

"All About the Green" opens Act 2 of the new musical "The Wedding Singer" with an inspired oomph. With its feverish line dances, insistent rock pulse and shrewd run-down of '80s values and trends ("Reaganomics, quid pro quo/G.O.P is SRO"), "All About the Green" is a delirious lampoon of greed-gone-amok.

The song is also a high point of "The Wedding Singer," a big, gaudy, eager-to-please but uneven new musical, now having its world premiere at Seattle's 5th Avenue Theatre.

The much-anticipated, $10 million-plus tuner — slated to open on Broadway in April after a tryout here — has some winning musical segments, likable performers and a stream of '80s quips, gags, fads and foibles.

What the musical lacks is some showstopping star power. Also, the pop-culture-heavy script seems designed for those who know the difference between Bon Jovi and Van Halen, Pac-Man and Ferris Bueller.

At 2 ½ hours it toils vigorously but sometimes at cross-purposes, trying to mesh a sweetly goofy love story and a cruder comic grab bag.

On the title alone, "The Wedding Singer" will attract fans. But it's been developed by the producing team that set a higher bar for new pop musicals with the Tony Award-winning "Hairspray," which also started at the 5th Avenue. And "Wedding" hasn't yet met that standard.

Based on the popular 1990s Adam Sandler movie of the same title, with a book co-written by Tim Herlihy (who also wrote the film's screenplay), "Wedding" sticks closer to its source. Robbie (the likable Stephen Lynch) is the good-natured Jersey wedding singer who befriends then falls for a disarmingly innocent waitress, Julia (played in great voice but rather blandly by Laura Benanti).

We know instantly they're made for each other, not the nastier types they've taken up with: Laura's boyfriend, Glen, a smugly despicable bond trader (a spot-on turn by Richard H. Blake), and Robbie's fickle fiancée, Linda (Felicia Finley).

The original score, with lyrics by Chad Beguelin (who co-wrote the book with Herlihy) and music by Matthew Sklar, is heavy on electric guitars, synthesizers and '80s spoofery. It kicks off weakly, with a frenetic opener, "It's Your Wedding Day." And most of the ballads feel generic.

When the music and Rob Ashford's choreography rev up, though, there are real gems. In the hard-driving "Casualty of Love," Robbie leads a "geeks unite" rock-out at a wedding. "Single," a male tavern lament, recalls the smooth soul of the Commodores. And "Today You Are a Man" is a hilariously loopy bar mitzvah tune for Robbie's Boy George-wannabe bandmate (wonderful Kevin Cahoon).

A flesh-baring "Flash Dance"-style number for Finley's calisthenic Linda is a crowd-pleaser but one of the coarser strokes. More broadly appealing: the sweetly goofy, satirical touches, like a surreal scene in a Vegas wedding chapel full of celebrity impersonators and two endearingly zany tunes Sandler sang in the movie.

As for the '80s visual garnishes, they are all there — in the superb lighting scheme by Brian MacDevitt, Scott Pask's scenic design of suburban New Jersey skylines and garish wedding chapels, and the '80s-trendy costumes by Gregory Gale, who apparently has raided the basement closets of both Madonna and Lionel Ritchie.

"The Wedding Singer" Tuesdays-Sundays through Feb. 19,