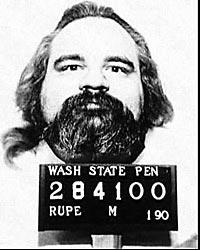 File photo of Mitchell Rupe, who was convicted for killing two women during a 1981 bank robbery. (AP)
By NICHOLAS K. GERANIOS
The Associated Press

Mitchell Rupe, a former death row inmate once found too obese to hang, died at the Washington State Penitentiary in Walla Walla today following a long illness, a prison spokeswoman said. He was 51.

Lori Scamahorn said Rupe died shortly after noon at the prison hospital. He had been there since Jan. 3 in the final stages of liver disease.

Rupe shot Olympia bank tellers Twila Capron and Candace Hemmig to death at point-blank range during a 1981 robbery that netted about $4,000.

Juries twice sentenced him to death, but higher courts overturned the sentences for various reasons. In 1994, a federal judge upheld his conviction but agreed with Rupe's contention that at more than 400 pounds, he was too heavy to hang because of the risk of decapitation. Rupe argued that hanging would constitute cruel and unusual punishment.

At the time, Washington's only manner of execution was hanging. The main method now is lethal injection, though a condemned inmate can opt for hanging.

Relatives of the victims attended numerous court hearings over the years, hoping to see Rupe executed. Prosecutors tried for the death penalty a third time in 2000, an effort that cost more than $1 million, but the Thurston County jury deadlocked 11-1 in favor - just shy of the unanimous vote required for capital punishment. He got a life sentence by default.

Frank Brown, the Walla Walla County coroner, estimated that Rupe weighed between 260 and 270 pounds at the time of his death. Brown will perform an autopsy Wednesday, and the body will ultimately be released to Rupe's family.

Brown said there were no immediate signs of foul play.

"I think there's a certain amount of closure that it's over and that he's having to explain his behavior to a much higher court than he's ever appeared in," Klingbeil, 70, said from her home in Woodway north of Seattle. "He's going to have some tough time explaining his deeds on this Earth."

She said family members visit Capron's grave in nearby Tumwater every week. Payne turns 74 on Wednesday and said news that Rupe had died was "the best birthday present anyone could ever have given me."

"I know it sounds horrible. But if he ever once said he was sorry or if he had ever shown any remorse instead of sitting there gloating, maybe I'd feel different," Payne said.

"Mitch, when I represented him, was always a gentleman, a very intelligent man," Hunko said. "He regretted what he did that got him in trouble."

Rupe weighed more than 425 pounds — that's the highest the scale went — when the federal judge ruled he was too heavy to hang, Hunko said.

But that was not his normal weight, Hunko said. Rupe's myriad physical problems had caused fluid to build up in his body and dramatically increased his weight, the attorney said.

Doctors in Walla Walla performed emergency surgery that allowed him to shed 150 pounds of fluid within a few weeks, Hunko said. He eventually weighed about 275 pounds, 25 less than when he entered prison, Hunko said.

As a result of the Rupe case, the Legislature in 1996 changed the state's primary method of execution from hanging to lethal injection, Hunko said. 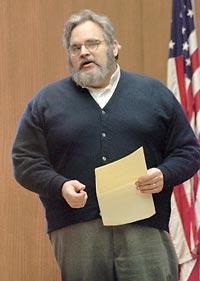 In this 2000 file photo, Mitchell Rupe reads a statement to jurors at the conclusion of his third death-penalty hearing in Olympia. (LOUIE BALUKOFF / AP)