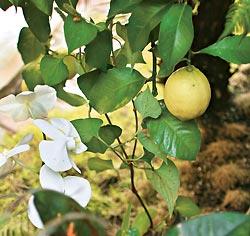 A Lisbon lemon and a white orchid show the practical and aesthetic benefits of a tropical garden. (MIKE SIEGEL / THE SEATTLE TIMES)
By Dean Stahl

LEMON BLOSSOMS scent the air, papaya leaves rustle in the wind and bananas hang in bunches in Patrick and Sandi Repetowski's West Seattle garden. A tropical motif can look out of place at this latitude, but this garden is all of a piece: the landscape in relationship to the house, its proximity to saltwater, even the gardeners themselves, who are genuinely nuts about the tropics.

Judges for Pacific Northwest Gardens: A Competition for Home Gardeners determined it a winning combination last August. The Repetowskis have been awarded the grand prize: a trip for two to London and admission to the May 2006 Chelsea Flower Show, including five nights' lodging. The Seattle Times Pacific Northwest magazine and the Northwest Flower & Garden Show, in cooperation with the Arboretum Foundation, sponsor the competition, which drew 141 entrants.

Among the judges' comments: "This garden is especially strong in relation to the house. A brave garden, with high-end materials in difficult spaces, done in a quality way and without the owners deviating from their vision."

The Repetowskis' entryway garden faces west and offers unobstructed views of Puget Sound and Bainbridge Island. The site is challenging, however; the sloping bank, with a stucco retaining wall and a sidewalk just below, catches glare off Puget Sound in summer and wind with salt spray in winter. Plants in this position tough it out. They include sago palms, fan and Chinese windmill palms, banana plants, princess flower (Tibouchina), phormiums, cordylines and a swath of silver-leafed cardoons. Two Mediterranean olive trees mark the front-porch entry. Red-flowering oleanders soften a veranda wall, which links house and garden.

How the winners
were chosen »

French doors in the living room open wide to a brick terrace behind the house. From there, paths loop through a dense but coherent jungle to five seating areas, each in a private glade with comfortable furniture. The space is perhaps only 40 feet deep, but it is crafted to seem expansive. Neighbors' houses are disguised by foliage, and the back bank is cloaked with perennials, trees and shrubs of varying heights. As a result, the lot contour is obscured, while distant treetops remain visible.

"One thing I've learned is that there are no straight lines in nature and no uniformity, per se," Patrick says, explaining his trickery. "Let nature do as much as possible; let it feel unplanned. It reinforces the feeling of serenity."

In the back garden, the couple planted sable palms, kangaroo apples and strawberry guavas, as well as hydrangeas and rhododendrons where those forms and textures are appropriate. An especially attractive rose of Sharon (Hibiscus syriacus) near the house adds exotic beauty when flowering. Some of the many New Zealand tree ferns have been in the ground seven or eight years.

You are never far from a brugmansia in this garden, either in a pot or planted out. "They are far and away my favorite plant," Patrick says. He mail-ordered his first batch a dozen years ago, and has since experimented with 15 or 20 varieties. They prove root-hardy in this location, where it rarely dips into the 20s in winter, and he protects them as needed. He has given away hundreds of plants grown from cuttings.

When the couple bought their rambler in 1985, the 50-by-100-foot lot had the familiar sloping bank of grass in front and a back garden of lawn and shrubs. The back lot is abutted by a steep bank, which made for an abrupt bookend. In short, there was little interplay between house and garden, and not much enticement to linger outdoors.

Over time, they remodeled the house into the Hawaii-style place it is today, with a stucco exterior, covered veranda open to the breezes, and furnishings that add to the South Seas ambience. The crucial element, the glue, is the garden.

The Repetowskis' passion for things tropical may seem faddish, but Patrick was born to wear Hawaiian shirts. "I always loved the Trader Vic's look," he says. The couple even went to a Polynesian restaurant in Seattle on their first date, in 1974. They were married a year later and vacationed in Hawaii the year after that. By their second trip to the islands, which included touring a garden show, they were both swept away by the tropical mystique.

Patrick, a sales director for Boeing Commercial Airplanes, earned a degree in construction engineering. He later took classes in landscape architecture at the University of Washington, and has since applied his knack for design and building to projects around garden and house. For example, he added extensive used-brick and slate pathways and patios throughout the garden, and built a waterfall feature of lava rock by the back slope.

The couple work as a team to refine and maintain the garden. Sandi offers overall aesthetic guidance, as well as hands-on effort, while Patrick is the more passionate plant person. Sandi, a senior vice president for ConAm Management, finds the garden an ideal place to decompress.

Years ago, Patrick relied on pesticides and weed killers but learned quickly that they wouldn't work in this garden. "If I used pesticides one year, the next year the bad bugs came back worse than ever because the good bugs were gone," he says. "I tried using a mild weed killer, but the brugmansia could detect a whiff of it across the yard. It would split along the nodes, cause deformities and other problems. So, I stopped using it."

Major cleanup occurs in spring and fall. But in between, if you look closely, says Patrick, "you'll see weeds." Plenty of them. "I take care of that in the fall cleanup," he says, insisting "we're not slaves to the garden."

And that, as Patrick knows, is the island way. 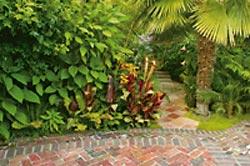 Well-designed pathways are good for plants. For example, an estimated 970 people walked through this garden during the 2005 West Seattle Garden Tour, with minimal wear and tear on the greenery. (MIKE SIEGEL / THE SEATTLE TIMES)

The front garden is a few yards from Puget Sound. Palms, bananas, cardoons, cordylines, phormiums and a brace of Mediterranean olive trees at the top of the stairs have proved their toughness. (MIKE SIEGEL / THE SEATTLE TIMES) 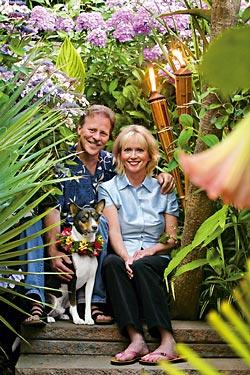 Grand-prize winners Patrick and Sandi Repetowski, with their basenji, Tazi, are framed by hydrangeas, flaming torches and, in the foreground, a brugmansia bloom. "I'm not a fanatical gardener," Patrick says. "This style of gardening is so forgiving &#8212; texture on texture." (MIKE SIEGEL / THE SEATTLE TIMES) 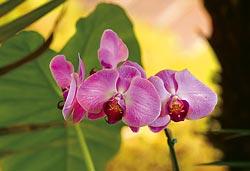 Container plantings include orchids and other tender species. (MIKE SIEGEL / THE SEATTLE TIMES) 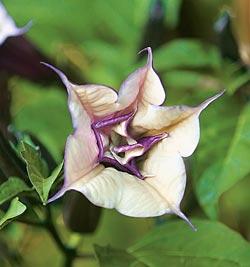 A dash of color from Datura metel 'Cornucopaea' is welcome amid green patterns. (MIKE SIEGEL / THE SEATTLE TIMES) 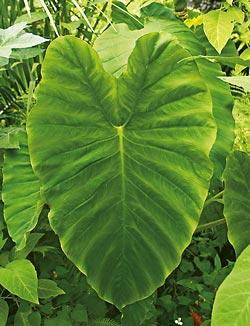 Taro suggests Hawaii, with its lushness and fecundity; its soft leaves contrast with nearby spiky palm fronds. (MIKE SIEGEL / THE SEATTLE TIMES) 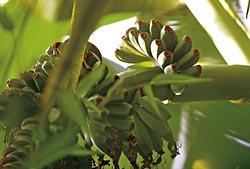 The Repetowskis leave banana plants in the ground year-round. "If it is going to be very cold, I wrap the trunks with cheap blankets and cord and don't worry about the green tops," Patrick says. (MIKE SIEGEL / THE SEATTLE TIMES) 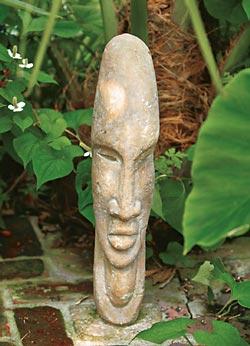 A tropical garden cries out for a tiki figure, even at latitude 47. (MIKE SIEGEL / THE SEATTLE TIMES) 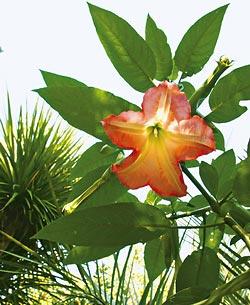 The Repetowskis are enamored of brugmansia, which perfumes the house on summer evenings. (MIKE SIEGEL / THE SEATTLE TIMES) 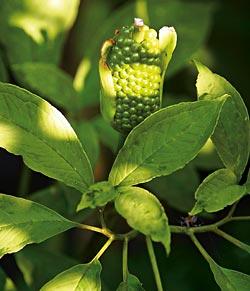 A tropical-themed garden offers surprise, mystery and the opportunity to grow unusual plants, including this amorphophallus, from the arum family. (MIKE SIEGEL / THE SEATTLE TIMES) 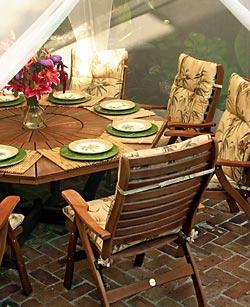 The Repetowskis entertain frequently in summer. Here, the table is set outdoors under a gauzy canopy on one of five back-garden terraces. (MIKE SIEGEL / THE SEATTLE TIMES)