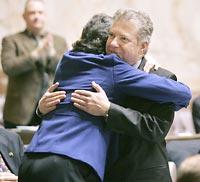 OLYMPIA — Nearly everything state Rep. Ed Murray has done in public life this past decade, from running for office to chairing the House Transportation committee, was aimed at one thing — passing a gay-rights bill.

Murray, a 50-year-old legislator from Capitol Hill, acknowledges that with some hesitation. He takes pains not to be viewed as "just a gay lawmaker" or to be considered a single-issue politician.

He was a lead player in passing the $8.5 billion transportation tax package last session and sponsored legislation that adopted some of California's tough limits on automobile emissions, issues he cares deeply about.

Yet, "in the back of my mind, everything I've done, I've done with this in mind," he said about the Legislature's historic passage of gay-rights legislation on Friday. Gov. Christine Gregoire says she'll sign the bill into law on Tuesday.

Murray set out to become a powerful member of the Legislature who had to be taken seriously, a moderate Democrat who could work with Republicans and business.

"If I were just a gay legislator, if people just viewed me as that, the bill would not be out of the House today," he said.

In the end, getting the gay-rights bill passed took a lot longer than he expected. The legislation banning discrimination against gays and lesbians squeaked out of the Senate by a 25-23 vote on Friday, almost 30 years after it was introduced.

Murray has worked on the bill, first as a lobbyist and then as a lawmaker, since the early 1990s. In that time, his hair has grayed and his skills as an orator, negotiator and politician have matured.

In the minds of both supporters and opponents, there's no doubt who got the measure passed.

"I believe the majority of the responsibility is at his [Murray's] feet. He's the one that's been driving this issue," said House Deputy Republican Leader Mike Armstrong, R-Wenatchee, who voted against the bill. "I view him as a legislator who is tenacious."

Getting the gay-rights bill to the governor's desk turned into a kind of elaborate chess game, with Murray contemplating every move, from the committee he wanted to lead down to the type of testimony gay-rights supporters would give.

"Ed drills down into the details and nuances of issues way deeper than most of us have tolerance for," said Sen. Erik Poulsen, D-Seattle, a friend of Murray's who has worked with him in the Legislature since 1995.

"I think that's because he feels like he has to do more than most people to establish respect and credibility. In the process, it just became a habit of how he deals with issues."

Murray first got involved with the gay-rights measure as president of the Privacy Fund, a statewide gay and lesbian lobbying group, when state Sen. Cal Anderson sponsored the bill.

Anderson died in 1995 of complications from AIDS, after urging Murray to take over the fight in the Legislature. Murray was appointed to a House seat that same year and was elected in 1996.

The first years were rough.

"Very few people treated him like a regular guy," Poulsen said. "They didn't joke around with him. People didn't know what to say because he was the 'openly gay' legislator. It took a long time, especially for the men in Olympia, to treat Ed like a regular guy."

From the start, Murray wanted to change the way people viewed him. He knew that one route was to move up in the party power structure.

Republicans controlled the House when Murray was appointed to his seat. But in 1999, Democrats and Republicans tied for control. Murray made a pitch to House Democratic leadership to become a committee co-chairman.

"I wanted to be viewed as a power," he said.

It made a difference.

Before he became co-chair of the Capitol Budget Committee, he had 12 sponsors for the legislation. "The year I became co-chair, I had 65 sponsors. So power matters, and knowing how to use it in a bipartisan way matters," he said.

Murray also set out to defuse the overheated rhetoric that characterized the gay-rights debate. Over the years, people testifying at hearings were allowed to launch into verbal attacks, describing gays and lesbians as sick and depraved.

An opportunity came on the House floor in 1997 during a debate about a bill banning same-sex marriage. Murray blasted Republicans for the way they ran hearings on the measure.

"Lesbians and gays in these hearings were linked with pedophilia and child molestation," Murray said on the floor. "The sponsor of this bill ... on the radio said gays and lesbians are diseased and criminal and have a short life span. In the Senate a member said that gays and lesbians were responsible for low SAT scores.

House Majority Leader Lynn Kessler, D-Hoquiam, remembers the speech. "It was a wake-up call," she said.

Verbal attacks against gays and lesbians haven't disappeared, but the vitriol has calmed. When the gay-rights bill passed the House Jan. 20, only two tame, relatively short speeches were made, by a Democrat and a Republican.

Outside the Legislature, Murray worked to help build a gay and lesbian lobby after it fell apart in the late 1990s. Murray said that after the gay-rights Initiative I-677 was rejected by voters in 1997, "the gay and lesbian political structure basically imploded and went away."

He cajoled people to build an organization to lobby the bill in Olympia, and even helped raise money.

Bill Dubay, a longtime gay-rights activist in Seattle, said Murray asked him to get involved. "He'd say, 'You're one of the people in the state that others will listen to. You can help pull something together.' That was Ed calling and coaxing."

As the years went by, Murray saw his strategy taking hold. The tone of the debate mellowed and he became an influential member of the Democratic caucus. In addition, society as a whole became more accepting of gays and lesbians.

The gay-rights measure sailed out of the House with record votes, and the gap in the Senate became smaller and smaller.

Murray kept the pressure on, working to nail down the final few votes he needed, especially from Republicans.

He asked the gay and lesbian lobby to hire lobbyists with experience working with business to get Republican support. Specifically, he asked for female lobbyists starting last year.

"For whatever reason, we've noticed that most straight male legislators are more comfortable talking to women," he said.

And Gregoire joined the fray this year and last, meeting with Sen. Marilyn Rasmussen, a conservative Democrat from Eatonville whose vote on the bill was uncertain. Rasmussen agreed to support the measure if the bill was amended to say that it did not create a precedent for gay marriage and did not endorse any "belief, practice, behavior, or orientation."

Murray met with other senators he wasn't sure of and asked for their support. This is where having power pays off.

When it came down to the vote on Friday, both Republicans and Democrats in the Senate knew the bill was going to pass. Yet Murray sat on the sidelines with his longtime partner, Michael Shiosaki, seemingly as nervous as ever, watching intently as each vote was cast.

After the vote, he gave Shiosaki a long hug.

Murray said it's a different world for him now.

"It's one of those rare things that probably only happens once in your life," he said. "It's going to be a weight off my shoulders."

The state Senate passed a gay civil-rights bill by a 25-23 vote Friday. The House quickly passed Senate amendments to House Bill 2661, by a 61-37 vote, and sent the measure to Gov. Christine Gregoire, who will sign it into law on Tuesday.

What it means: Gays and lesbians are added to the protections of the state anti-discrimination laws, covering housing, employment and insurance. The state Human Rights Commission will enforce the measure, as it does complaints involving age, race, gender and disability.