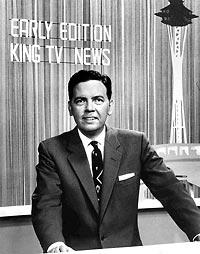 Charles Herring is seen on the set of KING-TV News in 1962. The first live broadcast aired on the station on Sept. 10, 1951. (COURTESY HERRING FAMILY)
By Tan Vinh
Seattle Times staff reporter

On an early September evening in 1951, Charles H. Herring Jr. stepped in front of a camera and into history, becoming Seattle's first live-television news broadcaster.

He changed the landscape of this radio- and newspaper-dependent city, colleagues and historians said. He brought Seattle breaking news and live coverage of historic events. He became part of the family dinner-hour ritual.

Mr. Herring died Monday at Swedish Medical Center after a long bout with cancer. He was 83.

Mr. Herring, who worked at Channel 5 for 16 years, was the first live-news anchor north of Los Angeles and west of Minneapolis, said Feliks Banel, a news historian for Seattle's Museum of History & Industry (MOHAI).

His coverage of the 1962 Seattle's World's Fair was the nation's first live broadcast via satellite to Europe, according to KING-TV News.

Through Mr. Herring, a riveted public had a front-row seat for the historic test flight of the Boeing 707 prototype in 1954, the riot in the state penitentiary at Walla Walla in 1955 and the McClellan Committee hearing into the affairs of the controversial Teamsters union leader Dave Beck in Washington, D.C.

With his authoritative voice and dapper suits, Mr. Herring projected a sense of confidence during the nightly 15-minute broadcast.

The first live broadcast aired on Sept. 10, 1951, MOHAI said, and among his top stories, according to a Seattle Times article, was a forest fire that spread across thousands of acres in Forks, Clallam County.

"In the early 1950s, KING-TV was the only television station on the air. Anyone with a television set got the news from Charles Herring," Banel said.

The U.S. Navy sent Mr. Herring to fight in the Pacific. When he returned two years later, he took a newscasting job at a Seattle radio station before becoming Channel 5's first news director and anchor in 1951.

A former mom-and-pop store on Queen Anne Hill that had an uneven floor served as his newsroom. "His desk was propped up with something so that his pencils wouldn't roll off onto the floor as he was trying to edit his news script," Banel said.

He would type his script — he was the fastest two-finger typist you will ever see, his family said — then hop into his car to the studio in South Lake Union, sometimes arriving minutes before airtime.

Every day was a race to the studio because he was chasing news, said his son, Charlie Herring of Seattle.

By the time his son was in middle school, he realized his father was a big deal because at restaurants, diners would always stop Mr. Herring to get his autograph.

Mr. Herring, who once read the news on air with a smoking pipe in his hand, left Channel 5 in 1967, and with his wife, the late Mary Bemus, purchased KAPY-AM in Port Angeles. The couple ran the radio station until 1978. He then worked for Boeing as a video producer until retiring in 1987.

He lived on Glen Acres Golf course in Seattle, near the first hole, for about the past 20 years.

Besides his son, Mr. Herring is survived by his brother, Jerry Herring, of Sonora, Calif.; a sister, Carlee Lorenz, of Rolling Hills, Calif.; daughters Mary Susan Pitlick of Seattle, Pam Beil of Fox Island and Jenny Herring of Edmonds; and six grandchildren.