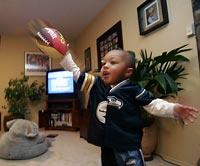 After 3 ½ years of marriage, Shawn and TamiRae Bell may have to split up. At least for a day.

She's a born-and-bred Seahawks supporter, who as a child on Beacon Hill watched the concrete poured for the Kingdome, the Hawks' first home.

"I'm so pro-Pittsburgh I can't think about any other team," said Shawn, 38, a Renton car salesman who'll spend Super Bowl Sunday with some 200 other members of the "Black & Gold Express" at the group's headquarters, the Hooters near Tacoma Mall.

"I don't know if I want to be around that," TamiRae said. The teacher, 38, is weighing whether to watch the game with friends instead.

Steelers fans and Pittsburgh transplants are a small minority in Western Washington, but their kinship is strong, as is their affection, for the four-time Super Bowl champs.

"I think anyone who grew up in Pittsburgh has a hard time being loyal to anyone other than the Steelers," said Jim Russell, a marketing consultant and Pittsburgh native who moved to Seattle in 1981.

One reason for that fierce loyalty, Russell said, is that the heroes from the Steelers dynasty of the 1970s remain larger-than-life figures. Hall of Fame wide receiver Lynn Swann, for example, is running for Pennsylvania governor.

But equally important is a bond forged by hard times, said Russell, 57.

"Pittsburgh has gone through such unmitigated misery in almost every respect, starting with the steel-mill collapse in the mid-1970s ... when it went down, it went down hard."

For Russell, this Super Bowl is a "dream matchup between my two home teams. ... I'd be happy if the Seahawks won, but I'd be happier if the Steelers win."

Brad Inserra, 49, has no such ambivalence. The owner of Brad's Swingside Cafe in Fremont has been wearing his Steelers sweat shirt and hat in recent days, despite taking some minor guff from a Seahawks fan.

A native of Monongahela, about 25 miles south of Pittsburgh, Inserra has decorated his restaurant in black-and-white photos from Pittsburgh from the 1930s through the 1960s. He watches Steelers games with a small group of Pennsylvania transplants who foster a superstition that eating hot peppers helps the team to victory.

Seattle fans aren't as rabid about their football team, says Inserra, 49, attributing that to the variety of things to appreciate about living here, including innovative companies, beautiful scenery and great local wines.

"When I was growing up in Monongahela, it was a filthy place," he said. "The air was polluted; the water was polluted; the winters were long and depressing. There was only one reason to live, and it was the Steelers." His prediction: Steelers, 23-20.

"I can't even turn on the news this week. It's just Seahawks this and Seahawks that. I've stopped listening to the radio and watching local TV," said La Forest, a Home Depot manager trainee in Spanaway.

La Forest will watch the game in an $80 Steelers jersey he ordered with his name across the back.

"Now is the time that Pittsburghers huddle together," he said. "It doesn't matter what race or class, we're all together as Steeler fans."

La Forest said loyalty is a two-way street in Pittsburgh, a deep connection between the team and town. While Seahawks fans have struggled through ownership changes and the attempts of absentee owner Ken Behring to move the team to California, the Steelers are owned by the same local family that gave birth to the franchise in the 1930s.

Scott MacWilliams, 33, a group-home supervisor in Seattle, would be rooting for the Seahawks in any other matchup, "but the Steelers are always going to be No. 1 with me."

MacWilliams grew up in Pittsburgh, captivated by the Super Bowl teams. For the past week, he's traded friendly barbs with co-workers and predicts the Steelers will win a close game, 27-21.

"I'll watch it in my living room where I can scream and yell and be as loud as I want," he said. "I don't think I want to take on the Seattle bar scene."

At the Sideline Sports Bar in Bellevue, a regular haunt of Steelers fans, managers are expecting a Super Bowl crowd with a strong contingent for each team, and they are setting up a tent to double the restaurant's 150-person capacity.

"We've never seen anything like this," assistant manager Steve Hunt said. "The Steelers fans have been coming here for years, and now we're seeing Seahawks fans coming out of the woodwork." He hopes the two groups co-exist peacefully on game day, and says managers are still discussing security arrangements.

One Pittsburgh transplant who will be happy with any Super Bowl outcome is Sandy Levy, a Swedish Medical Center physician. "I'm a huge fan of both teams, so I win either way," said Levy, 55.

From a chronological perspective, Levy has a bigger investment in Seattle. He was 18 when he left Pittsburgh and has lived here 28 years. And despite his professed neutrality, his remarks hint at a westward leaning.

"I got an e-mail from my sister in Pittsburgh," he said. "She confided that she's afraid the Seahawks are going to win, and I found myself feeling pretty good about that."

A co-worker of Levy's at Swedish, nursing supervisor Rita Gibbons, 50, is another Pennsylvania native with dual loyalties. On game day, she'll be waving her gold Pittsburgh "terrible towel" and a white Seahawks towel.

Most of Gibbons' nine brothers and sisters still live in Pennsylvania and are avid Steelers fans. "Really, I think it's the Seahawks' turn, because this would be their first," she said.

"Of course, my relatives don't feel that way."

Fans can help send the team off to Detroit.

Parking and rally are free.

Fans can get cheer cards and rally towels. 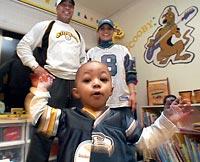 Shawn Bell, left rear, is a lifelong Steelers fan, but his wife, TamiRae, is a Seahawks supporter. Their 2-year-old son, Tylen, bridges the gap with a Seahawk-Steelers jersey sewed by his mother. (THOMAS JAMES HURST / THE SEATTLE TIMES)