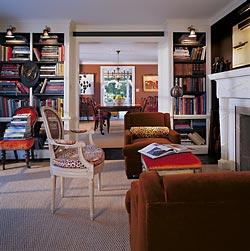 The original living room of the house has been turned into a library with custom bookcases and sconce lighting. Clifford Bunch's remodel emphasizes the interconnection of the three rooms leading into the rear terrace. (BENJAMIN BENSCHNEIDER / THE SEATTLE TIMES)
By Lawrence Kreisman

AT THE TURN of the last century, Germans had a word for it — gesamtkunstwerk — total work of art. It referred to interiors that shared a design vocabulary and, consequently, provided its users with a sense of ensemble throughout. It was not simply the custom furniture but also the colors of walls, the patterns of fabrics and the choice of finish materials that made it all work. Designers took up the challenge of bringing harmony into homes that, for any number of reasons, had become a hodgepodge of periods, styles and construction methods.

Seattle interior designer Clifford Bunch has taken a similar all-encompassing approach in remodeling the Washington Park home he shares with David Pritchard, although he admits to enjoying the serendipity of filling the house with bits and pieces that span many generations.

Bunch, who studied design in London, loved the 1938 brick house from afar for a long time. It reminded him of English Regency homes he'd admired in Britain.

By the time they bought the house in 1999, it had undergone a series of remodels under several owners and had become a museum of different styles. Bunch approached the remodel with an eye toward returning harmony to the interiors and the terraces. He remembers, "Our first challenge was making it make sense; the second challenge was to add congruency in the moldings and patterns." Ultimately, they decided to take the interiors down to the studs, save the fireplaces, do major upgrades, and bring back traditional wall and floor treatments.

Bunch liked the progression of interconnecting rooms that tied them visually to each other and to the garden beyond. But single doors separated some of these spaces; he sought to open them up to reinforce their relationships.

Because former owners had added a larger living room at the south end of the house, there were essentially two living rooms framing a dining room. Bunch took this opportunity to turn the original living room into a library by adding custom bookcases with trim and moldings that are carried through adjoining rooms.

Prestige Custom Builders Inc. was the contractor. Because Prestige specializes in remodel and restoration projects, the contractor understood Bunch's interest in bringing back traditional architectural details and was equally committed to doing them correctly.

Pritchard watched in admiration. "This is Cliff's design and work. We always talked about it, and Cliff looked for feedback regularly. But what he was coming up with was just the right thing."

Moving into the larger home gave the couple the opportunity for well-considered furniture purchases. "When we moved in," Bunch recalls, "everything we had fit into one room. So we have purchased slowly as we found things."

His interest in English furniture led him to two respected local dealers, Stuteville Antiques and Walker-Poinsett Antiques. He also found pieces at London auction houses. The house is also home to comfortable upholstered sofas and chairs, 1970s-era Lucite lamps and contemporary paintings. Bunch explains: "One of the things about the English house that really appeals to me is the evolution of time periods. It is more eclectic than people think it is."

Bunch speaks about the value of education for designers and their clients. "Many people don't know what they want. It's so crucial to know what you want . . . To have a process of education and to understand the vocabulary are keys to doing interiors correctly." 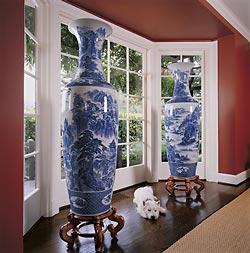 In the dining-room bay are monumental late-19th-century Chinese blue and white vases that were bought in Hong Kong. (BENJAMIN BENSCHNEIDER / THE SEATTLE TIMES) 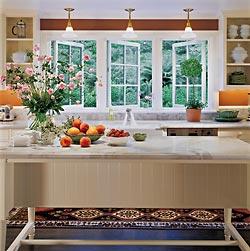 The new kitchen has painted cabinetry with the look of traditional furniture. Bunch chose Calcutta Gold marble for the countertops because it suggests the patina of old stone. (BENJAMIN BENSCHNEIDER / THE SEATTLE TIMES) 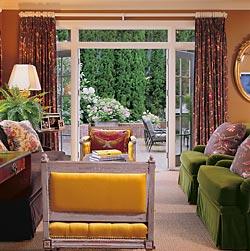 The living room has seen the least change. The large amount of wall space devoted to windows and French doors gives it the feel of a conservatory. Two French chairs upholstered in gold fabric share space with comfortable contemporary seating. (BENJAMIN BENSCHNEIDER / THE SEATTLE TIMES) 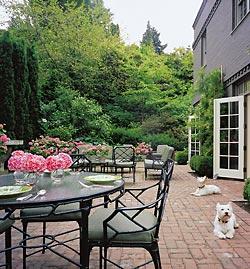 Lawn was replaced with paving in the rear terrace. Italian cypress screen the south edge of the property. Tim Moshier of Cambium did the landscaping to make this space a comfortable extension of the house. The reproduction of a 1906 Frank Lloyd Wright fountain, far left, comes from Nichols Bros. Stoneworks, a Snohomish company. (BENJAMIN BENSCHNEIDER / THE SEATTLE TIMES) 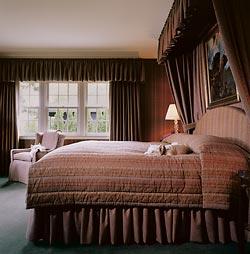 The focal point of the master bedroom is a "half tester" bed. Bunch chose a patterned fabric that covers the walls and also the bedding. The chair is a garage-sale find, newly reupholstered. Terriers Angus and Gavin are comfortable in their surroundings. (BENJAMIN BENSCHNEIDER / THE SEATTLE TIMES)
Success lies in the decision-making

In planning a remodel, David Pritchard says, "People underestimate the decisions that need to be made. Having a designer involved in the process from the beginning can save time and money and get more of what you are looking for."

Interior designer Clifford Bunch tries to help clients discover what they are looking for, asking: How do they live? How do they use their space?

The key to a successful project, he says, is having a decision-maker on site: "Someone has to be in charge of the decisions, the large ones and the little tiny things. If you are defaulting to the builder, then you just better have a good builder."