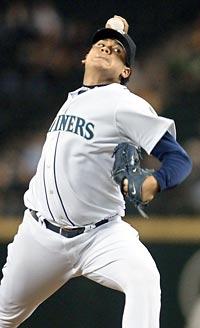 Felix Hernandez was impressive in his rookie season, but the Mariners want to keep his innings under control. (JIM BATES / THE SEATTLE TIMES)
By Bob Finnigan
Seattle Times staff reporter

Gil Meche agreed to a one-year, $3.7 million contract, but the most interesting news from the Mariners' annual spring-training luncheon Thursday was about Felix Hernandez.

Seattle team president Chuck Armstrong announced that Hernandez will not pitch for Venezuela in the World Baseball Classic. That had been speculated for some time, but there was another nugget of news about the 19-year-old pitcher.

Hernandez likely will be the No. 5 starter.

"We've been thinking of having Felix as the fifth starter, to start the season," Mike Hargrove said. "That's the easiest place for us to monitor his work."

The manager said he would keep a close eye on both Hernandez's pitch counts and innings.

This was the basis for the club's successful appeal to the WBC technical committee that Hernandez not pitch for his native country in the March international tournament.

"Felix will not pitch for Venezuela," said Chuck Armstrong, confirming what had been speculated for some time. "We felt it best that given his youth and inexperience that it would be far better for him to be with our club in spring training."

There was also speculation that Hernandez would not be unhappy with the ruling, which relieves pressure at home. One industry source said Venezuelan president Hugo Chavez made a personal call to the youngster to ask him to pitch for his native country.

"Talent like his only comes along every so often," Hargrove said. "We have to protect him."

Hargrove referred to one of Hernandez's dozen starts for Seattle last season after being called up on Aug. 4. In a game at Minnesota on Aug. 20, Hernandez threw 114 pitches.

"Whatever it was," Hargrove said, "I was real nervous having him go that far."

Jamie Moyer is likely to start on April 3 against Anaheim in the season opener.

"Jamie's the prime candidate, and beyond that you really don't necessarily want two left-handers going back-to-back," Hargrove said. "So, our No. 2 starter would probably be a right-hander."

Hargrove hinted the second half of the 2005 season would help determine who would start the second game — probably Joel Pineiro or Meche.

Neither did exceptionally well. But Pineiro did well in seven of his 11 starts in August and September, while Meche staggered after injuring his right knee in mid-August and returning as a reliever for the last two weeks.

Newcomer Jarrod Washburn, a left-hander, will likely start on April 5 against his old club in the opening-series finale.

Meche, whose new contract includes $225,000 in incentives for reaching 190 to 220 innings, apparently will start April 6, the first of a four-game series against Oakland.

If Felix does wind up as the fifth starter, he would make his 2006 debut on April against the Athletics.

Other familiar names on the list are Scott Atchison and Jeff Harris, who pitched for the Mariners last year and wound up off the 40-man roster, and utilityman Greg Dobbs, also on the 2005 club and now off the roster.

Right-hander Jeff Heaverlo will be back in the big-league camp after being on the minor-league side last spring, joined by fellow Northwesterners Matt Tuiasosopo and Lindsay Gulin.

Video coordinator Carl Hamilton was recognized by the Pro Baseball Video Coordinators Association, an award that will be named for him.

Groundskeeper Bob Christofferson won the Harry . C. Gill Award from the Sports Turf Managers Association., the first from major-league baseball to win since George Toma of the Kansas City Royals in 1992.

In December, Randy Adamack, vice president for communications, was given the Robert O. Fishel Award for excellence in public relations.