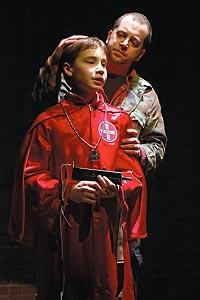 "That play brought me to Seattle," he notes. Now, 18 years after its debut at ACT Theatre here, "God's Country" likely will be the last Dietz work staged in Seattle before the author relocates to Austin.

"The University of Texas created a new playwriting and screenwriting faculty position and approached me about it," says the Queen Anne dweller. "But a big selling point of the job is that we can keep our house here and spend summers in Seattle."

Dietz, his writer wife Allison Gregory (whose "Peter and the Wolf" is running at Seattle Children's Theatre) and their children Ruby and (the newly adopted) Abraham will move to Texas in August.

Until then, Dietz is working on a new script for ACT, but he's also found time to consult with director Sheila Daniels on "God's Country" at CHAC.

The courtroom docudrama, about the Idaho white supremacy group The Order's role in the 1984 murder in Denver of liberal Jewish talk-radio host Alan Berg, is the best-known and most-performed of Dietz's many published plays.

Yet while meeting with Daniels, Dietz decided, "A lot of things that were important to me as a playwright in 1988 could do with some cutting here and there."

Despite the new cuts, "God's Country" remains much the same, and "frighteningly relevant" — especially the stark portrait of The Order, which planned the June 18, 1984, murder of Berg. (Though no Order members were convicted of murder, several were convicted of violating Berg's civil rights.)

Drawn to the subject because he listened to Berg's radio show while growing up in Denver, Dietz culled much of the dialogue from court transcripts.

"You couldn't update the play today, because you couldn't keep up with all the similar incidents that have happened since," Dietz states. "A fundamental bible of The Order was a racist book called 'The Turner Diaries' — which was also found on the front seat of (convicted Oklahoma City bomber) Timothy McVeigh's getaway car."

Dietz has directed "God's Country" himself, but trusts Daniels to put her own stamp on it. "Sheila's doing things with it I've never seen done, and with an amazing group of actors. So I'm getting to watch someone else wrestle with the issues and dynamics of the play. And that's been thrilling."