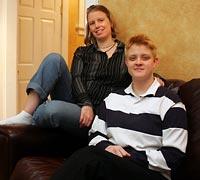 Alicia Lewis, left, and Kj Anderson filed a complaint under Tacoma's anti-discrimination law after they were denied a YMCA family membership for themselves and their two children. (JIM BATES / THE SEATTLE TIMES)
By Lornet Turnbull
Seattle Times staff reporter

When they moved to Tacoma from Provo, Utah, four years ago and applied for a family membership at a neighborhood YMCA, Alicia Lewis and her family didn't expect a problem.

After all, Tacoma felt a world away from the conservative community where she and her partner had felt compelled to keep their sexual identity a secret, but where they were able to buy a family membership to the Y for themselves and their two children.

In a rare victory for people claiming discrimination based on sexual orientation, Lewis successfully challenged the Y's policy under a civil-rights ordinance that took effect in Tacoma four years ago.

Similar to anti-discrimination measures that exist in Seattle and elsewhere in the state, the ordinance does what the much-debated House Bill 2661 would do statewide: protect gays, heterosexuals, bisexuals and transgendered people from discrimination in areas of employment, housing, finance and public accommodation.

The statewide measure would allow people, for the first time, to sue in state court, where damages could be more lucrative.

The House has passed the bill, and the Senate could vote on it as early as today.

Sixteen states have similar laws in place, but efforts to pass a law in Washington have failed every time since the first attempt 29 years ago.

Critics question whether such a law is really needed, while supporters say it's long past due.

"It would send a message that Washington is a state that believes in fairness," Lewis said.

The Rev. Joseph Fuiten, pastor of Cedar Park Assembly of God Church in Bothell, called HB 2661 a "slimy slope" that would rob the state of its ability to fight against gay marriage.

• Sexual-orientation cases have represented only a small fraction of discrimination allegations. In Seattle, for example, they made up just 6 percent of all cases filed between 2000 and 2005.

• Such cases are tough to prove and are almost never successful.

• While most are filed by gays and lesbians, some complaints — in Seattle, about 18 in the past decade — were filed by heterosexual men, who said they were harassed, fired or not hired because they were straight.

• Like other discrimination allegations, most involving sexual orientation are employment-based. Fewer relate to housing and fewer still involve discrimination in public accommodations, as did the case Lewis filed against the YMCA of Tacoma-Pierce County.

In preparing her complaint, Lewis found at least one unmarried heterosexual couple who had been allowed family membership at the facility.

"We felt the policy was being applied unevenly," she said.

Even before the city completed its investigation, the YMCA reached an agreement with Lewis' family and with two gay men who had also been denied a family membership.

Under a settlement agreement brokered by Tacoma's Human Rights & Human Services Department, the Y agreed to change its policy to allow household membership of two adults and their dependents.

It also refunded the two families the extra money they had paid for individual, rather than family, memberships.

Bob Ecklund, CEO and president of the YMCA of Tacoma-Pierce County, said the Y's earlier definition of who qualified as a family was based on historic practice, not sexual orientation.

"It was a way to be fair and consistent," he said.

But seldom are such cases that simple, investigators agree.

Rarely is discrimination as clear-cut as it was in the Tacoma Y case, where a written policy clearly excluded same-sex couples.

Among the 14 complaints filed in Tacoma since that city added sexual orientation to its anti-discrimination ordinance four years ago, the two against the Y were the only ones that went in the complainants' favor. Three of the 14 are still pending.

That so few complaints are upheld "doesn't mean discrimination didn't occur," said John Briehl, executive director of Tacoma's human-rights department. "The burden of proof is very high. And the onus is on the charging party to prove he or she was harmed."

In the five years she has been enforcement manager in the Seattle Office for Civil Rights, Angela Dawson-Milton said she recalls only a single sexual-orientation case that ended in a complainant's favor.

That case involved a 40-year-old heterosexual waiter at a Seattle restaurant who said he was suspended and later fired because a new general manager was replacing older straight waiters with young gay men.

The restaurant was ordered to pay the waiter $5,000.

Civil-rights investigators say that, unlike race and sex-discrimination cases, there's little case law to guide sexual-orientation complaints, and no federal or Washington state law to turn to.

And it can be tricky, too, to prove that someone was treated unfairly because he or she is gay.

Investigators say they look for disparate treatment — that is, how others who aren't gay were treated under the same circumstances. But in order to determine that, they first need to know who within a particular workplace is and isn't gay.

Often, Dawson-Milton says, employers say they can't answer that because they don't know. And unless investigators can prove that an employer did know, a case almost always ends there.

"That problem became apparent as soon as we started getting our first few cases," said Goodwin Trent, who was an investigator with the state's Human Rights Commission for seven years before joining Tacoma's human-rights department three years ago.

"There's still a large social stigma attached to homosexuality. There are people who are still closeted at work, even though they may be open in their private lives."

Fuiten, pastor of the church in Bothell, said backers of the law have not made a convincing case that gays are being discriminated against — and thus that the law is needed.

"The homosexual side is good at talking about hate and hate crimes and discrimination, but they have not presented any evidence of pervasive hardship," Fuiten said. "What is the problem we're trying to solve here?"

It can be difficult to get a handle on.

In jurisdictions without anti-discrimination ordinances, examples of discrimination may exist but can't be documented, gay-rights supporters point out.

And Jamie Pedersen, a Seattle attorney and member of Lambda Legal, a gay-rights legal organization, said in places where anti-gay discrimination ordinances do exist, the measures themselves can be deterrents to discrimination.

Dawson-Milton said the knowledge that any complaint could be publicized may discourage some people from filing one.

Pedersen believes a state law would open up a new avenue to those who believe they've been harmed: the ability to sue in state court where recovery could include not just compensatory damages, but punitive damages.

"All the relief is available under state and federal statutes," Pedersen said. "The commissions are fine, but they don't have the tools in their arsenal to provide help to those who have been harmed. So the local ordinances end up being symbolic."

The House has approved House Bill 2661, and the Senate could vote on it as early as today. It would expand the state's existing anti-discrimination law to include sexual orientation as a basis for prohibiting discrimination in employment, places of public accommodation, finance and housing.

Who would be covered: Essentially everyone.

Exemptions: Nonprofit religious organizations would be exempt from the law's provisions, as would employers with fewer than eight employees.

Who would administer it: The State Human Rights Commission.