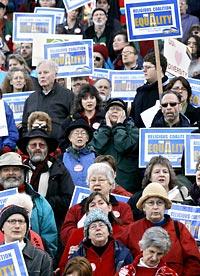 Hundreds of people rallied on the Capitol steps in Olympia on Monday in support of a statewide gay civil-rights bill. It was part of daylong lobbying and prayers for House Bill 2661. (GREG GILBERT / THE SEATTLE TIMES)
By Janet I. Tu
Seattle Times staff reporter

OLYMPIA — Bearing signs representing their religious faiths and their legislative district numbers, hundreds of people filled the steps of the Capitol on Monday at a rally in support of a statewide gay civil-rights bill.

The rally, organized by Religious Coalition for Equality and Equal Rights Washington, was part of daylong lobbying and prayers in support of House Bill 2661, which would ban discrimination based on sexual orientation in areas such as housing and employment.

Advocates have tried to get the Legislature to pass the bill for decades, and it failed by one vote in the Senate last year. It may pass this year. Last Friday, the House approved the measure, sending it to the Senate, where Sen. Bill Finkbeiner, R-Kirkland, who voted against it last year, announced earlier this month that he would vote in favor. The bill had its first Senate hearing Monday.

Regardless of the Senate vote, "we will never, never, never give up," said Rep. Ed Murray, D-Seattle, a longtime sponsor of the bill who spoke at the rally, along with Gov. Christine Gregoire, Sen. Lisa Brown, D-Spokane, and Rep. Fred Jarrett, R-Mercer Island.

Murray also told the crowd — which organizers estimated at 2,000 — that they were there "because we are people of faith and we believe faith is a voice for unity versus division,... for love versus bigotry."

Some local religious leaders — Christian, Jewish and Muslim — also spoke in support of gay marriage, an issue pending before the state Supreme Court.

"I think it's critical for people to understand that people of faith are not necessarily narrow; that faith should be broadening and should be making connections across our differences, rather than widening those differences," said Donna Schumann, 51, a library computer specialist and a Quaker with the Olympia Friends Meeting.

People in the crowd carried signs with religious affiliations such as "Catholics for Justice" and "Suquamish United Church of Christ."

The Rev. Monica Corsaro, an ecumenical campus minister at the University of Washington and a leader of Religious Coalition for Equality, told the crowd the coalition would hold a rally next year, too, regardless of whether the bill passes, because "the other side" also would continue to fight.

Indeed, Pastor Ken Hutcherson of Redmond's Antioch Bible Church has said he would start a boycott against Microsoft and other corporations that support the bill.

The Washington State Catholic Conference, the lobbying arm of the state's three Catholic dioceses, opposes the bill, as it has in the past. The bill's definition of sexual orientation is too broad and would create a protected class of citizens that would make it easier for the court to allow gay marriage, said Sister Sharon Park, the conference's executive director.

Pastor Joseph Fuiten, who also opposes the bill, said his evangelical lobbying group, the Faith and Freedom Network, would be taking out large newspaper ads in legislative districts where there are potentially swing senators.

But even Fuiten said he thinks the bill will pass this year, so he's now focusing on the next big battle. "We're really going to have to mount a campaign for the same-sex marriage issue," he said.