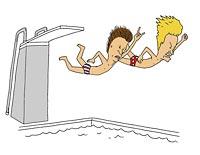 At least that's what Beavis or Butt-Head would say. They hate reading.

And yet it also sort of rules — depending on how you feel about the work of Mike Judge. The mogul of the moronic has three new DVD collections on store shelves and a feature film on the way: "Beavis and Butt-Head Volume 1 — The Mike Judge Collection" (Paramount, $39.98), long-anticipated after an earlier set was abruptly canceled; a special edition of his 1999 cult hit, "Office Space" (Fox, R, $19.98); the fifth season of his long-running cartoon "King of the Hill" (Fox, $39.98); and "Idiocracy," due this fall.

This isn't the Algonquin Round Table. Not even the end table. We had a meeting of the butts — that is, minds, with Judge, 43, by phone from his Austin, Texas, home. Judge's voice sounds slightly like Butt-Head's, making his pronunciation of such things as "Connie Chung" distracting.

Three new DVDs. You're on fire! Uh, is that a sore subject? (MTV cut pyromaniac Beavis' "Fire!" references after some critics scapegoated them for the deaths of two kids who set fire to their trailer.)

(Laughs.) Yeah, I got sensitive about that fire thing. No, that seems to have passed.

That was always obviously an ugly thing that I thought "Beavis and Butt-Head" — that I know they had nothing to do with. But it's always tough with the press. You don't want to seem like you don't care, but then when ... yeah, that was, I don't know, that whole thing ...

The censored material is restored on the DVD. What are you glad is back in?

I'm glad to see Beavis say, "Let's burn something." I gave it to you in a complete sentence there. I think now maybe we've matured as a nation and maybe we can not be afraid of a cartoon.

Compared to "South Park" and "Drawn Together" — which made my jaw drop — your cartoon seems so tame.

Yeah, I still look back and I think, how did it happen that this show got accused of all this stuff by the main network newscasters, you know, like Connie Chung? In order to get MTV, you have to be responsible enough to pay your cable bill; you have to order it. To be able to do all that and say, "I can't turn it off when my kids are watching it," it's ridiculous.

It's easy to forget how huge a phenomenon the show became in the early '90s. What was the biggest sign of that?

I was walking with my daughter in a park. When the show was on, we'd moved up to New York for a year and a half, and I just overheard somebody quoting the show. Someone said, "Yeah, you need to wash your dog, give your dog a bath." And the other guy said (in Beavis' voice), "Washing the dog, washing the dog!"

I thought it might have been getting name-checked in Senate hearings in 1993.

That was the other one. (Laughs.) Fritz Hollings, I think it was — "Buffcoat and Beaver," whatever it's called. That was a good one.

If it's not "Uh, huh-huh-huh," it's something about "Office Space." A few times it's been, "I quit my job because of your movie." I've heard that more than once, actually.

People walk into their office like Ron Livingston's character and get canned for it?

Yeah, "I didn't get promoted, I got fired." Another reason to sue me.

The scene where they want to promote him is kind of based on — I had an engineering job that I quit after, like, three weeks, and it just made them all want to promote me and give me stock options. It sort of worked for me. Well, loosely. The guy's like, "Well, let me have you talk to our VP." And then I went into his office, and he really wanted to have a heart-to-heart, like, "Why don't you like working here?" And so I just really opened up and I said, "You know, I walk in here and I just can't stand it. I'm sorry." I said, "I don't relate to anybody here." And the guy just kind of started saying, "Well, what if we gave you stock options? What if we gave you a reason that you wanted come in?"

My office has a class called "Situational Self-Leadership." How would the "Office Space" guys respond to that?

When I was writing "Office Space," a lot of it was based on my own experience, but I just wanted some office buzzwords and kind of like what you're saying, "situational" whatever — those kind of phrases. And I went into the bookstore thinking, OK, I wonder if I can find one of those business motivational crap books. And I found this one book that was just full of — it was called "Applied Strategic Planning," or something like that. It was written by three PhDs, and it was an entire book about pretty much nothing. It was just, you know, "the stages of a plan" and "planning a plan." It's like learning Klingon or something.

Why do you suppose "Office Space" wasn't a hit at first?

But who knows? Maybe it's something that plays better on DVD than it does in a theater.

Beavis and Butt-Head's neighbor Mr. Anderson sounds as if he's related to Hank Hill from "King of the Hill."

Well, originally I was going to have Hank be his son. I was kind of thinking we'd tie it into "Beavis and Butt-Head" as a sort of spinoff or something, but Fox said no.

What's inherently funny to you about propane and propane accessories?

When I was a musician, I played with this guy, Doyle Bramhall. We played around Texas a lot and we'd drive down to Houston, and the guitar player and myself were always just kind of talking about bubbas. Not necessarily rednecks, just regular guys. And we started this thing where there's always propane around. Because when you live out in the country, you don't have the gas utility, so you get propane. You just see a propane place and there's always this big fenced-in yard and a little building there and just tons of propane tanks. And when I was first working on the pilot, I opened up the phone book, because I was going "Propane, what should I call the place?" and I saw this ad for some propane place and it said, "Propane and propane accessories." So I just liked the sound of that.

I got the idea back when I was working on the "Beavis and Butt-Head" movie in '95, and it occurred to me that most science fiction shows the future being more civilized and more intelligent.

And here we were getting towards the year 2001, and instead it's like the "Jerry Springer Show" and all this stuff. So I thought it would be a funny idea to just take that progression 500 years or 1,000 years into the future. I also was thinking about evolution and how now it just favors people like guys who knock up a bunch of girls, irresponsible people who don't wear a rubber, all that kind of stuff.

It's validating Kurt Vonnegut more than anybody else. We're going extinct.

You said that in kind of a Butt-Head way. That sounded good.

So it's basically one of those guy-gets-frozen-and-thawed-out-in-the-future movies, but it's Luke Wilson, who's just kind of a dumb-ass today, and then in 500 years he's the smartest guy in the world because everyone's gotten dumb.

Mike Judge, the guy behind "Beavis and Butt-Head," "Office Space," "Idiocracy" and "King of the Hill," has several new DVDs out. (20TH CENTURY FOX) 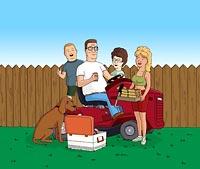