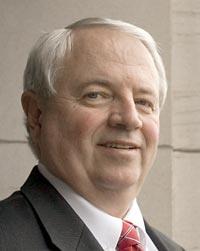 OLYMPIA — The lawmaker tapped to speak for Senate Republicans opposing gay-rights legislation is an affable, soft-spoken man who believes gays will go to hell unless they change their ways.

"I just read the Bible for what it says. It basically says that homosexuality is an abomination," said Dan Swecker, a 58-year-old veteran lawmaker from the rural town of Rochester, Thurston County.

He wants gays to know they can be saved. "Somehow that message has to get out. Because if people don't realize that it's a sin or there's not an opportunity for redemption, then we're going to lose them."

Swecker doesn't speak for all Republicans on the subject. Several House Republicans have voted for the bill in the past. And Republican Sen. Bill Finkbeiner of Kirkland says he will support the measure this session, noting recently that "our Legislature should in no way contradict the message that people can decide who they are going to love."

Yet Senate Republican leaders have anointed Swecker as their main spokesman when it comes to gay rights.

"I make a point to use who I think is the best person in our caucus to be our spokesperson," said Senate Republican Leader Mike Hewitt, R-Walla Walla.

Hewitt said there are differing views about the gay-rights bill in his caucus. Some oppose the bill based on strong personal beliefs and many feel the state should not tell businesses and landlords "what they can and cannot do," he said.

"There are several different factions," Hewitt said, "but we all ultimately believe the same thing in the end."

Rep. Ed Murray, D-Seattle, a gay lawmaker and longtime sponsor of the bill, considers it significant that Senate Republicans chose Swecker as the lead spokesman.

"I think it reflects the influence of the religious right on making public policy in the Republican Senate caucus," he said.

Murray said he likes Swecker and has worked well with him on other issues. But, he said, "it's incredibly arrogant for him to decide who is a sinner and who is not a sinner."

Swecker certainly is not alone in his views. At a House hearing about the bill Tuesday, people lined up to tell lawmakers about their belief that homosexuality is a sin. And the Rev. Ken Hutcherson, pastor of Antioch Bible Church of Redmond, has said he plans to call for a boycott of Microsoft, Hewlett-Packard and other businesses that openly support the bill.

Gay-rights legislation prohibiting discrimination based on sexual orientation has passed the House several times over the years but not the Senate. The measure died by one vote in the Senate last year. The legislation is expected to pass the House again this week.

Democrats consider this session to be perhaps their best chance ever of passing the bill because Finkbeiner, who voted against the measure last year, promised his support. He's the first Senate Republican to break ranks.

Still, it's not a certainty that gay-rights supporters will succeed. The Senate Republican caucus remains a formidable force, given the slim majority held by Democrats.

Swecker doesn't seem like an obvious choice to lead the GOP fight against gay rights.

First elected in 1995, he's not part of the Senate Republican leadership, doesn't serve on any committees that deal with the legislation and isn't a lawmaker known to seek out attention.

Unlike other members of his caucus, however, Swecker seems comfortable discussing his beliefs on the matter.

He's about as conservative as they come when dealing with social issues. Swecker opposes abortion, except in limited circumstances, and wants the U.S. Supreme Court to overturn Roe v. Wade. He supports prayer in school. And he'd like to see creationism taught as well.

"I think creationism is as reasonable an explanation for the origin of species and mankind as the theory of evolution," he said.

And this isn't the first time he's taken the lead on a controversial topic. In 1998, Swecker sponsored legislation banning gay marriage and led the Senate floor debate promoting the Defense of Marriage Act, which later became law. Its constitutionality is being considered by the state Supreme Court.

He argues, for example, that gay rights is a steppingstone to gay marriage. And if gay marriage becomes legal, he says, it will overtax the social safety net that supports traditional marriage by allowing gay spouses to tap into Social Security benefits, pensions and health insurance.

He also says gay rights would violate individuals' right to free association, and that business owners and landlords who oppose homosexuality should have the right to deny gays a job or housing.

Talk to him long enough, and his opposition returns to his religious beliefs. Swecker said he was an atheist before going to a weekend religious retreat with his wife at age 32 and becoming a Christian.

"It was one of those, all of the sudden, lights came on and it happened instantaneously. It was a very profound experience in my life," said Swecker, whose four grown children were home-schooled for part of their education. He and his wife get by on the $35,254 a year he makes as a senator. He worked as a salmon farmer and lobbyist before becoming a lawmaker.

"After I became a Christian, I started reading the Bible, and I'm not a scholar but I did a lot of reading. It became obvious to me that homosexuality is in the area of sin," said Swecker, who attends the Centralia Community Church of God.

Swecker said the "problem we face with homosexuality is that it's being touted by the greater society as something other than that. The greater society is saying, 'Hey, it's normal. It's what ought to be well within the range of things we tolerate in our day-to-day lives.'

"Now, the big problem that creates for the Christian is the thing we hold as the highest value is salvation. We also believe that if people aren't able to repent their sins, then salvation isn't available to them. One of the greatest threats is if we stop calling something sin that is a sin. Because people ultimately end up not knowing what we believe is one of the foundational truths of the Bible."

"To me, our failure to do that as a Legislature and a society is a sin."

Murray said the arguments used by Swecker are the same ones used by religious organizations in the past against civil rights for blacks. "And we, as a country, decided people at least deserved to have a level playing field. I think the same thing applies here."

Dan Evans, a prominent Republican and former governor of the state, said Swecker has a right to his beliefs. But he said, "both our constitution and our form of government down through the two centuries we've been a nation has been to keep religion out of government. I think this is a case where that really applies.

"People can have their own beliefs, but to use those beliefs to deny equal rights to citizens ... I think is wrong," he said.

Swecker said his views on gay rights do not come from anger or hate. "What I'm trying to reflect from my position on homosexuality is love, not discrimination, not persecution, not punishment, not any of those things," he said.

"I want those people to know the truth so they can be in heaven with me, if that's possible." 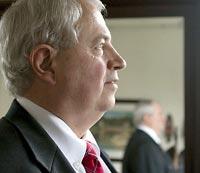 Sen. Dan Swecker is the Republicans' chief spokesman against gay-rights legislation. "I just read the Bible for what it says," he says. (TOM REESE / THE SEATTLE TIMES)

House bill 2661: State law bans discrimination based on race, sex, religion, marital status, disability and other categories. The bill would add sexual orientation to that list. Democratic leaders expect the measure to pass the House by the end of the week. That would put the issue before the Senate.