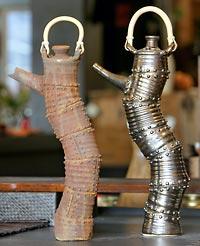 On the outside, the old Higo Variety Store building looks nearly unchanged from the shop that was a fixture in the Chinatown International District for more than 70 years.

The old-fashioned store sign remains, residents stroll past and the building still dominates nearly a block of Jackson Street.

But inside, the new store distinguishes itself from its former incarnation, moving from a shop that sold cigarettes, toys and sewing needles to one called Kobo at Higo that trades in elegant Asian ceramics, bowls, lamps and even cookbooks.

Binko Chiong-Bisbee and John Bisbee, an architect, who also own Kobo Capitol Hill, purchased the store last year from the family of Sanzo Murakami.

Sanzo Murakami started Higo Variety on Jackson Street in 1932. The store was boarded up while the Murakamis were in an internment camp during World War II. When the family returned home, Sanzo's children ran the store until retiring in 2003. Left behind were numerous artifacts from the old variety store.

The current owners have a new vision for the store, now focusing on selling items steeped in Japan's artisan history.

"In Japan, there are artisans who are six-, seven-, eight-generation artisans and artists," said Chiong-Bisbee. "They continue to preserve the traditional method of making something. We wanted to introduce that concept, that idea here."

Today, you find aisles stocked with sketches, textiles and ceramics from various artists. A recent exhibit included ceramic cups from 50 artists, all available for $14 to $135.

But the artist displays are just one element in the store; other treasures abound. Kobo at Higo carries Asian-style accessories for all areas of the home, selling bowls, teapots and sake sets alongside graceful lamps and wood furniture.

An Isamu Noguchi lamp could be on display, or you might be enticed by a rusted pot — until you see its $1,000 price tag. But you also could pick out a curvy ash veneer lamp for $260. Or buy dried atta fruit for $1 each (group them in a bowl for a natural touch), and then splurge on a dark wood knick-knack cabinet for $2,400.

Kobo is an excellent place to stock up on Asian dishware. Choose a clear glass sake holder with a space in the center for ice, or buy beautiful pottery that evokes nature with calming coral or natural dark hues.

Kobo also carries placemats and other textiles. Colorful umbrellas sit in a basket near a sofa. Kobo remains intertwined in Higo's history, beginning with its name and extending to exhibits of artifacts found in the store, and a planned museum wall with the Murakami family history and Higo's history.

Kobo will continue to showcase work by artists and artisans, a decision rooted in its owners' desire to elevate respect for ceramic arts.

But Chiong-Bisbee does not view the store as a gallery, per se.

"For us, we try to emphasize beauty in the functional, things we can incorporate into our lives every day," she said.

Ash veneer lamps by architect/designer Chan Lee of New York are available from Kobo at Higo for $260. In the background, the Noguchi cast iron base lamp is $300. (SCOTT COHEN / SPECIAL TO THE SEATTLE TIMES) 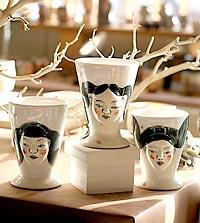 Kobo at Higo in Seattle sells Asian art and accessories, with a touch of history to boot. (SCOTT COHEN / SPECIAL TO THE SEATTLE TIMES)

Antique medicine chests ($450) are from Japan, and the teacups ($18 each) are designed by Seattle artist Akiko. (SCOTT COHEN / SPECIAL TO THE SEATTLE TIMES)

The store's original owners opened it in 1932 and owned it for more than 70 years. (SCOTT COHEN / SPECIAL TO THE SEATTLE TIMES)

Co-owner Binko Chiong-Bisbee says Kobo at Higo in the Chinatown International District focuses on Japan's artisan history. It sells a variety of home accessories and art, and hosts regular exhibits of works by local and international artists. (SCOTT COHEN / SPECIAL TO THE SEATTLE TIMES) 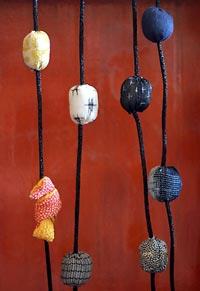 Necklaces are $40 and made from traditional Japanese fabric by Seattle artist Linda Hoshide. (SCOTT COHEN / SPECIAL TO THE SEATTLE TIMES)
Kobo at Higo

Kobo at Higo celebrates the new year from 1 to 5 p.m. today with the koto (a zither-like instrument) and shakuhachi (bamboo flute) duo En (Elizabeth and John Falconer) and performances of Indian, North African and Middle Eastern music by Baba Mahlis (Larry Mahlis and James Whetzel). The event also will feature tea and Japanese sweets.