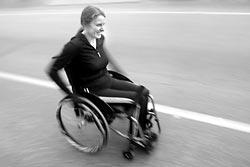 Amanda Gilbert, who has multiple sclerosis, sets off on one of her morning rides through her Woodinville neighborhood. While the disease put Gilbert in a wheelchair two years ago, she now wonders why she resisted. She says the chair has allowed her to keep exercising. (MIKE SIEGEL / THE SEATTLE TIMES)
By Richard Seven

THIS IS THE MONTH that you expect to be shamed and scolded into launching a series of healthy resolutions that will make you all you knew, or were at least told, you could be. I'm no Dr. Phil, thank God, but my best advice is to stop making resolutions.

At least stop making the unrealistic kind. They are unhealthy because they set you up for failure. I suggest moving in small, steady steps. Leaps and bounds often lead to setbacks. There is nothing wrong with a tad of imperfection, is there? Why not accept wrong turns as part of the journey? Why not, for once, accentuate the positive?

Hmm, I'm sounding a lot like Dr. Phil, but I'll charge ahead anyway.

Do not slack or obsess. Focus on the joy that exercise and movement bring to your life. The fulfillment you get from the "act" of activity. Yoga aficionados do this particularly well. Yoga instructor Isabelle Sturgul, who recently left her hometown Seattle for Atlanta and a health/spirit company called "Whole Journey," says she loves the immersion of her discipline.

"While I'm practicing, my focus becomes so refined that I am able to be completely present in that very moment," she says. "I'm not concerned with what I look like or who is around me. Sometimes when taking class, I become unaware of the instructor in the room. It is the perfect definition of being completely content." As other athletes do, Sturgul revels in the mind-body connection. Yoga, like sports that require complete focus, makes simple things like bending easier.

"Yoga is not only great for the spiritual well-being," she adds, "but is also a useful tool for letting daily stress melt away."

I met Amanda Gilbert a few years ago. We were in the same research study on exercise and multiple sclerosis. She was memorable for her laugh and wit. I remember she was running a support group on the Eastside.

I hadn't seen her since, but she e-mailed me recently, asking for advice. She had to start using a wheelchair, but in her relentlessly upbeat way, she accentuated how the transition allowed her to keep exercising. In fact, she said the wheelchair, while often "a pain in the butt," helped her increase her cardiovascular training.

She wheels herself on long rides, sometimes five mornings a week through her subdivision, and she lifts weights. She asked if I knew ways — such as the best grip — that would help her negotiate the hill she lives on when the rain falls; and she wondered if, as she considered longer distances, she should use a racing wheelchair or a hand cycle. (If you have advice I could pass along to her, please send it my way.)

That's what I'm talking about. Staying focused and positive.

I've interviewed, witnessed and learned from many athletes over the years. I've been awed by power, commitment, grace and skill. I've also noticed the difference between those who want to and those who feel they have to. The ones with the secret are those who have been able to mesh both feelings. As far as I know, we get just one life and one body, so yes, you should work out. But you're not going to last if that's your only stimulus. The athletes who amaze me the most are those who love the game, the sense of achievement, holding steady, coming back, participating, learning, trying something new.

Pam Burnell, manager of the Center for CardioVascular Wellness at Swedish Medical Center, says the root of unhealthy behavior is often hidden, and motivations to change often shift. The tricky part is getting people to be honest with themselves, figure out a realistic plan and take ownership of their health. Change can't happen until you are ready for it, want it, and take the effort to analyze what is holding you back.

One overriding obstacle she sees is impatience.

"There is an all-or-nothing attitude in our society, but people are going to slip," she says. "That's just part of the process. They have to acknowledge that slipping doesn't mean failure."

Richard Seven is a Pacific Northwest magazine staff writer. He can be reached at rseven@seattletimes.com. Mike Siegel is a Seattle Times staff photographer.

Regular yoga practice may help prevent middle-age spread and promote weight loss in those who are overweight. Researchers at Fred Hutchinson Cancer Research Center found that between the ages of 45 and 55, most people gained about a pound a year. That's a common pattern as people age and do not adjust their calories in the face of declining activity.

"However, men and women who were of normal weight at age 45 and regularly practiced yoga gained about three fewer pounds during that 10-year period than those who didn't practice yoga," said Dr. Alan Kristal, the study's lead author.

For the study, regular yoga practice was defined as practicing at least 30 minutes once a week for four or more years.