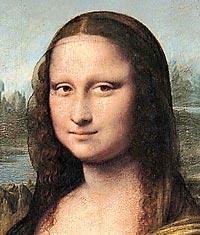 AMSTERDAM, Netherlands — The mysterious half-smile that has intrigued viewers of the Mona Lisa for centuries isn't really that difficult to interpret, Dutch researchers said Thursday.

She was smiling because she was happy — 83 percent happy, to be exact, according to scientists from the University of Amsterdam.

In what they viewed as a fun demonstration of technology rather than a serious experiment, the researchers scanned a reproduction of Leonardo da Vinci's masterpiece and subjected it to cutting-edge "emotion recognition" software, developed in collaboration with the University of Illinois.

She was less than 1 percent neutral, and not at all surprised.

Leonardo began work on the painting in 1503, and it now hangs in the Louvre in Paris.

The work, also known as "La Gioconda," is believed to have portrayed the wife of Francesco del Giocondo. The title is a play on her husband's name, and also means "the jolly lady" in Italian.

Harro Stokman, a professor at the University of Amsterdam involved in the experiment, said the researchers knew the results would be unscientific — the software isn't designed to register subtle emotions.

In addition, the technology is designed for use with modern digital films and images, and subjects first need to be scanned in a neutral emotionless state to accurately detect their current emotion.

Lead researcher Nicu Sebe took the challenge as seriously as he could, using the faces of 10 women of Mediterranean ancestry to create a composite image of a neutral expression. He then compared that to the face in the painting, scoring it on the basis of six emotions: happiness, surprise, anger, disgust, fear and sadness.

"Basically, it's like casting a spider web over the face to break it down into tiny segments," Stokman said.

"Then you look for minute differences in the flare of the nostril or depth of the wrinkles around the eyes."

Stokman said with a reading of 83 percent, it is clear happiness was the woman's main emotion.

Stokman said he knew the University of Amsterdam effort won't prove or disprove controversial theories about the painting.

One is that it was actually a self-portrait of Leonardo himself as a woman.

Larry Hornak, director of the Center for Identification Technology Research at West Virginia University, agreed the idea was entertaining.

"It's always fun to apply technology to areas of public interest, and sometimes you can come up with results that are very illuminating," he said.